IRON MAIDEN will return to Australia in May 2020 to perform 5 massive arena shows on their Legacy of the Beast World Tour with special guests Killswitch Engage.

END_OF_DOCUMENT_TOKEN_TO_BE_REPLACED 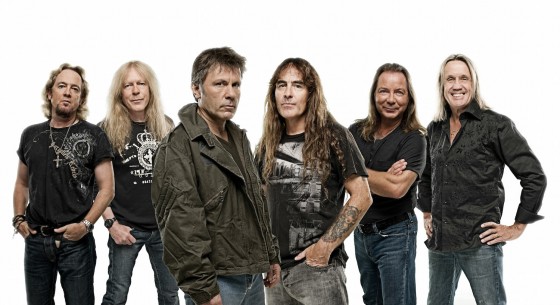 Rock legends IRON MAIDEN, whose new studio double album “The Book of Souls” just debuted at No 2 in Australia, will make a massively anticipated return in May on their enormous Boeing 747-400 jumbo jet Ed Force One, piloted by vocalist Bruce Dickinson and carrying band, crew and stage production and equipment.
END_OF_DOCUMENT_TOKEN_TO_BE_REPLACED

The year was 1988 and a 6.9 magnitude earthquake tore through Armenia. International charity campaigner, Jon Dee was there working at getting coverage of the devastation and he was so horrified by what he saw (particularly the images of people carrying child size coffins) that he felt compelled to do something and hence, “Smoke On The Water-The Metropolis Sessions” was born. It was to be a reworking of the Deep Purple classic, a song that is almost instilled into our brains at birth and certainly one that any aspiring guitarist worth his weight will work through at some point.
END_OF_DOCUMENT_TOKEN_TO_BE_REPLACED 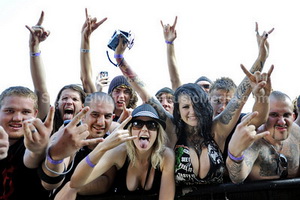 Situated once more at Brisbane’s RNA showgrounds the venue area this year is enlarged as additional stages have been added. There are 8 in total this season allowing for a very broad ranging choice in bands available to be viewed at any given time of day.
END_OF_DOCUMENT_TOKEN_TO_BE_REPLACED

Iron Maiden Live In Dallas, Texas 2010. The Final Frontier Tour. This video is from the first date on the tour! This is the new song off of the new album that came out Aug. 16, 2010.

Check them out here: http://www.ironmaiden.com/

Best track on the album is ‘Illusive Existence’. It contains cascading avalanches of relentless drumming that makes it the most brutal of the songs. Space is allocated within this to show off not just the talents of Pat Lundy (drums) but also a good chunk of solid guitar soloing. Guitar shred is prevalent throughout the EP, appearing on every track but only ever in shortish bursts.
END_OF_DOCUMENT_TOKEN_TO_BE_REPLACED

END_OF_DOCUMENT_TOKEN_TO_BE_REPLACED 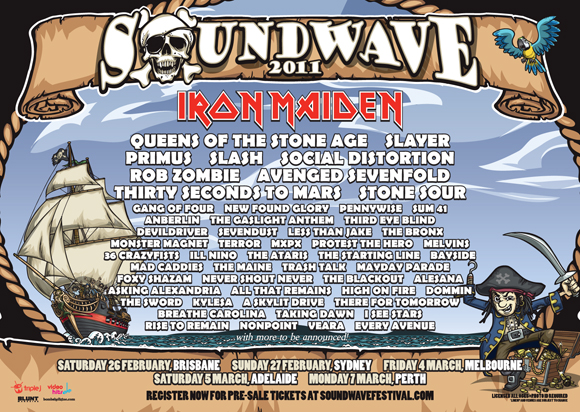 MA: Um well, putting it in perspective, the original idea came from the fans really, because the first three records that we made, the ones you just mentioned, were done with another singer. We had another bass player on two of them, so we didn’t have a stable line up on those first three albums, and it was a very different styled singer. But then Angela Joined for the fourth Album and with Sharlee on base and Daniel on drums, it was just a solid thing with me and by brother on Guitars and we started talking heavily about the fourth album, and that line up’s now how people know us. Over the years we talked and released our albums, and you know, well, this is the definitive line up of Arch Enemy, that we have right now, and the very early Albums have kind of dated into obscurity basically.
END_OF_DOCUMENT_TOKEN_TO_BE_REPLACED

Eskimo Joe’s fourth album “Inshalla” has debuted at number one on this week’s ARIA Album Chart, mirroring the success of their third album “Black Fingernails, Red Wine” which debuted at number one nearly three years ago, on June 19, 2006. In doing so “Inshalla”, already certified Gold, becomes the 138th Australian number one album!
END_OF_DOCUMENT_TOKEN_TO_BE_REPLACED

Eminem’s album “Relapse”, already certified Platinum, has held at number one on the ARIA Album Chart for a second week as Black Eyed Peas hold at one on the singles chart with “Boom Boom Pow” for a third consecutive week, whilst chalking up four weeks on top of the digital track chart.

Green Day holds at 2 with “21st Century Breakdown” on the ARIA Album Chart this week, and it’s the touring artists who make a big impact on the top 10 – P!nk up to #3 with “Funhouse”, Lady Gaga up to #6 with “The Fame” and Pussycat Dolls up to #8 from 17 with “Doll Domination 2.0”.
END_OF_DOCUMENT_TOKEN_TO_BE_REPLACED