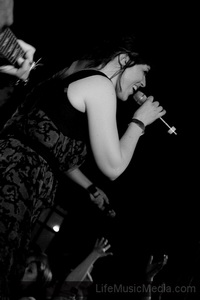 The Herd supported by Koolism.
July 31 @ The Zoo

This is to be The Herd’s final national tour for twelve months. Although they had decided not to tour for the remainder of 2009, they succumbed to popular demand for another tour. Since this is a fan’s tour, their fans came out in absolute support and made this night a Sold Out night several days in advance.

It is always good to see a support act receive acknowledgements from a crowd that is eagerly waiting for the headliner. Koolism do an excellent job at drawing several acknowledgements from tonight’s crowd. It is amazing what two guys, a laptop and some decs can do. It’s worth a mention that several punters, at the conclusion of their set, quickly moved to the side of the stage to personally greet and congratulate them.

As anticipation grew and quickly set the audience into random calls of “Hurry Up”, The Herd bounced onto the stage, fifteen minutes late, which they later apologise for and rapidly launch into a monumental set fitting for this night. One by one they appear on stage to completely fill it with their numerous members. The electrifying energy that The Herd emit leaps from the stage and infects the entire audience from the front to way to back where a small group are enjoying a drink at the bar.

There is an amazing interaction between the band and the audience that carries on throughout the whole night. There are handshakes, kisses, high fives and even some water exchange to keep the band cool during their set. Unlike other venues, The Zoo lends itself to this type of close encounters with bands, as you are literally one meter away from the entertainment.

There are key elements in every band and although The Herd has key elements strategically placed in every corner of the stage, there is one stand out feature. Jane Tyrell smiles, dances, signs and beautifies this band.
Music has always been a terrific medium to highlight social letdowns and political disasters. The Herd are a self confessed political band and have made political issues a main feature of their music. Highly politicised lyrical content spreads through all of their releases.

There is always a danger in drawing references from the current political climate due to the fact that what is relevant now may quite possibly be irrelevant in a year’s time. However, Australia still needs to wake up, 77% of Australians are probably racists and don’t even know it and Indigenous Australians still suffer even after an apology.

The audience signs every single word of every single song and it is the pure raw content of their material that maintains tonight’s audience on a high throughout the whole night. The fact that they dare to criticise Australia’s apparent clean image and receive such a massive positive response at tonight’s show, is a demonstration that they have struck a chord with a discontent citizenry, and as such, have made their music a historical reference.

At the conclusion of this current tour The Herd are set to take a break and lock themselves up in a studio to cook up their next instalment. We all anticipate this release and hope they continue to hold up the mirror to our society.