recording The Grates highly anticipated third album due out later in the year.
END_OF_DOCUMENT_TOKEN_TO_BE_REPLACED

In further massive news Sparkadia are set to celebrate the release by way of their biggest Australian tour to date. Spanning four weeks The Great Impression tour is due to visit most major cities. Joining them in the celebration are the extraordinarily talented Operator Please and fellow Ivy League label mates, Melbourne’s Alpine.

Sparkadia – Take ‘Postcards’ On The Road Oct-Nov 2008
Amandah Wilkinson of Operator Please tells Tara-Kai Hammond, “It’s good to be home…” in the lead up to the Valley Fiesta 2008

Fans can now attend the second Festival in Sydney, comprising the same bill, on THURSDAY, 27 JANUARY 2011
We a very thankful and proud of the continued popularity and support of the event which enables us to present an additional show in Sydney for the second year in a row.
END_OF_DOCUMENT_TOKEN_TO_BE_REPLACED

END_OF_DOCUMENT_TOKEN_TO_BE_REPLACED

The tour will hit all major capital cities throughout June kicking off in Perth on Friday June 18 before heading to Adelaide, Melbourne, Sydney and Brisbane with a homecoming show on the Gold Coast, Saturday July 3. All shows will be supported by Triple J un-earthed favourites Tim & Jean from Western Australia and also Sydney’s Chaingang.
END_OF_DOCUMENT_TOKEN_TO_BE_REPLACED

Lead singer Amandah says, “The album is the perfect representation for where we are at right now. It has all the experiences and growth from touring, seeing places and discovering the new; encompassed into about 35 minutes of songs.”
The band chose to upload the debut single ‘Logic’ to Myspace two weeks ahead of service: the reaction was incredible, with national radio stations adding the track immediately. Proving to be an instant hit, ‘Logic’ is released digitally on February 16.
END_OF_DOCUMENT_TOKEN_TO_BE_REPLACED

Amandah Wilkinson of Operator Please tells Tara-Kai Hammond, “It’s good to be home…” in the lead up to the Valley Fiesta 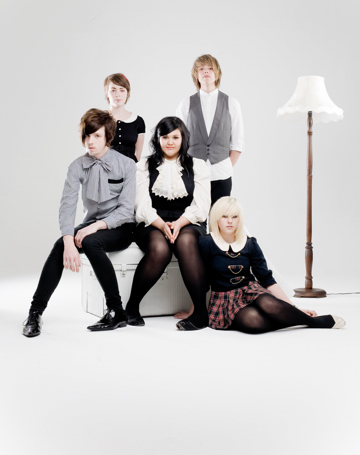 This years Valley Fiesta promises to be the biggest yet, with artists like yourselves set to headline, joined by the likes of Sparkadia, Urthboy, DJ Dexter (Avalanches), Jeff Lang, Katy Steele (Little Birdy), Avalon Drive, Winnie Coopers, The Gin Club and Texas Tea, to name a few. How do you feel to be included in such a noteworthy line up of artists?
We feel honoured to get the chance to play. We have never played the Valley Fiesta and I have been wanting to see the bands on the line-up. We have been away for such a long time, so it’s good to be home.

So what do you think it’ll be like playing the Valley Fiesta now that you’ve produced a Top 10 album and achieved international acclaim?
I don’t really know to be honest, and I don’t really think about those things when we play a show.
If anything you should never have any expectations, you never know what the crowd or atmosphere will be like until you are onstage. Hopefully it will be okay.

Operator Please would have played at some very different venues, (small and large, etc) over the years… What’s the best gig you ever did? And why?
The best gig to date for me is a toss up between Melt festival in Germany and the Shorditch Crawl! We played Melt festival at night and it was the perfect atmosphere! We had a beautiful crowd too. It was amazing to go there and have people come to see us and what was a major bonus was that there were people singing! And the Shorditch Crawl show was messy and hilarious but still a favourite. It was about 1am and the place was packed, everyone was dancing, lots of people swinging off various light stands and stairs into the crowd and even people dancing on the bar! The fold back was shit, all our instruments broke, stage divers mangled the kit. Incredible!!!Amandah I read somewhere that you picked random people who could play an instrument to join the band. How did you all combine your musical styles to make the winning combination that is Operator Please?
We didn’t really consciously combine our styles, I think that’s what makes us Operator Please. We were obviously influenced by different music but we really didn’t think about the sound we were going to make. We did what we could do with our instruments and still do the same.

What made you decide to record an independent EP, do some shows and self-promotion, then head over to the Big Apple, (New York)?
We recorded an independent EP because it was the next logical thing for us to do, we just started playing shows and we made little badges and our own screen printed tshirts but we didn’t have any music recorded. So we scraped up some money between us and recorded some songs live, all very quick. We distributed it ourselves by burning copies and getting my sister to design the art and got bits and pieces like cardboard and stuff to print on. You have to do things by yourself if you want to get them done, we decided to go to New York because we were invited to showcase a week before CMJ.So the line up for Operator Please has changed quite a few times since the beginning…Why is this?
Being in a band isn’t for everyone. Our first Violinist left because she didn’t want to perform music live and didn’t enjoy it. Our keyboard player left as a mutual decision between her and the rest of the band. We are away so much from home and touring is a strenuous thing and if you can’t cope the slightest it isn’t right. You are put totally out of your comfort zones and you have alot of time to think and you live in and out of eachothers pockets day in and day out. We started out really young and growing up touring and making music and seeing things you form your own opinions and forge your way of life, if you don’t love what you are doing, then you shouldn’t do it.I’ve read that you’ve never expected anything and are happy enough to have people turning up to your shows and liking what they hear. So what motivates or inspires you to write and perform? The artistic expression? As an outlet? For the joy of it? For others enjoyment?
I enjoy making music. I enjoy playing music. Music is a release for me from everything, it is also and expression. Ultimately when you start making music, you make it for yourself, you never think that other people are actually going to listen, but when they do it’s amazing and you are appreciative for it. Music like many forms of art is a single minded thing. If you are constantly thinking of how to please everyone else, how are you supposed to be happy with yourself.

What is the band up to at the moment? Writing? Jammin’? Recording? Touring? Or just taking a break?
We are writing, playing a couple of shows, but we are just happy to be at home and in one country for more than a week