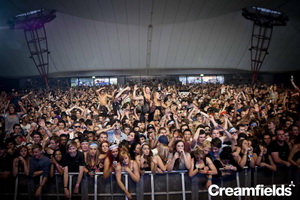 After its launch into Australia last year, Creamfields Australia is back bigger and better for Easter 2011. The Totem Onelove crew (also behind the Stereosonic festival) are committed to bringing you some of the world’s best acts, utilizing some of the best venues in Australia, amazing production and value for money in ticket pricing.

Totem Onelove (Hardware Corp and Onelove Music Group), are pleased to announce the main headliner for Creamfields 2011: Deadmau5 with the full live show (with LED Mau5 head and new production), designed by the people who brought the world Daft Punks’ legendary live show!! Deadmau5 is one of the biggest acts in the world with countless productions, and has been stunning audiences worldwide with this live light & videoshow. This is the first time he has brought his show, LED Mau5head and concert level production to Australia.

Another year and another smash hit for Frenchman Martin Solveig, all over the radio and TV with ‘Hello’ Martin will be shooting an exclusive video at Creamfields Australia. Skrillex is one of the hottest producers at the moment, owning 7 out of 10 spots on the Beatport chart in November 2010. Chuckie is one of the most in demand acts in the world with his Dutch House weapons. Simon Patterson one of the new school guys of trance has jumped up in the DJ Mag rankings and blown away crowds at major festivals including Trance Energy around the world. Gabriel and Dresden are one of the most revered acts in the Trance/Progressive world and haven’t toured for many years. Wynter Gordonhas had a massive few months, ‘Dirty Talk’ topping the Aria Charts and will be performing live at Creamfields. Hi Tek Soul is the new project for Kevin Saunderson and Derrick May, the original Detroit Legends together for 3 hours at each show. After sellout club shows across Australia, DJs, remixers and producers the Bingo Playersreturn for Creamfields after a busy end to 2010 and start of 2011. Top 3 Psy Trance act Skazi return to Australia with a new album due in March: ‘Time to feed the animals.’ French Wunderkid Surkin is back in Australia with a new live show. Electronic Duo Dada Life are from Sweden. Check out their latest album ‘Do the Dada.’ Umek is one of the techno massives favourite acts, get set for Umek at all shows. Nadastrom The collective brainchild of Washington, D.C. natives Dave Nada and Matt Nordstrom. Emerging duo experiencing significant buzz. i.e. The debut release from Nadastrom sold out on vinyl and became a digital store annual bestseller. One of the buzz acts of 2010 was Round Table Knights, a huge year on dancefloors, charts and touring. At a time when techno is marketed in the same way as a sci-fi blockbuster, it’s possible for every aspiring DJ to have the same playlist as their idol with just a few mouse clicks, the mysterious Sandwell District label is pushing in the opposite direction, putting some distance between the artist and the audience. London based Tim Green is one of those producers who doesn’t turn in a lot of filler tracks. His unique style and flair shine for all to see when the 25 year old puts his music out there. After a decade in the business Bart Claessen knows a thing or two about trance. Over the last eight years he’s been responsible for huge club hits, international chart smashes and sub-genre defining releases. If there is one thing you can’t blame Mumbai Science for it’s a lack of imagination. At only 24, the duo already have a decade worth of creative experimenting behind them.

The countdown is on Australia! Creamfields will return with larger stages and epic production, with the first Cream event stadium show, ‘Planet Cream’, in Adelaide. Brisbane will see a new venue this year, the RNA Showgrounds as we move to a larger capacity with a new site configuration for Melbourne.

Creamfields has established itself as the worlds greatest electronic music festival. Now in its 12th year it continues to dominate the festival market, spanning 17 countries and attracting a worldwide audience of nearly 3 million people. Beginning life in Winchester (UK) in 1998, Creamfields continues to hold the crown as one of the worlds favorite dance festival brands.
END_OF_DOCUMENT_TOKEN_TO_BE_REPLACED