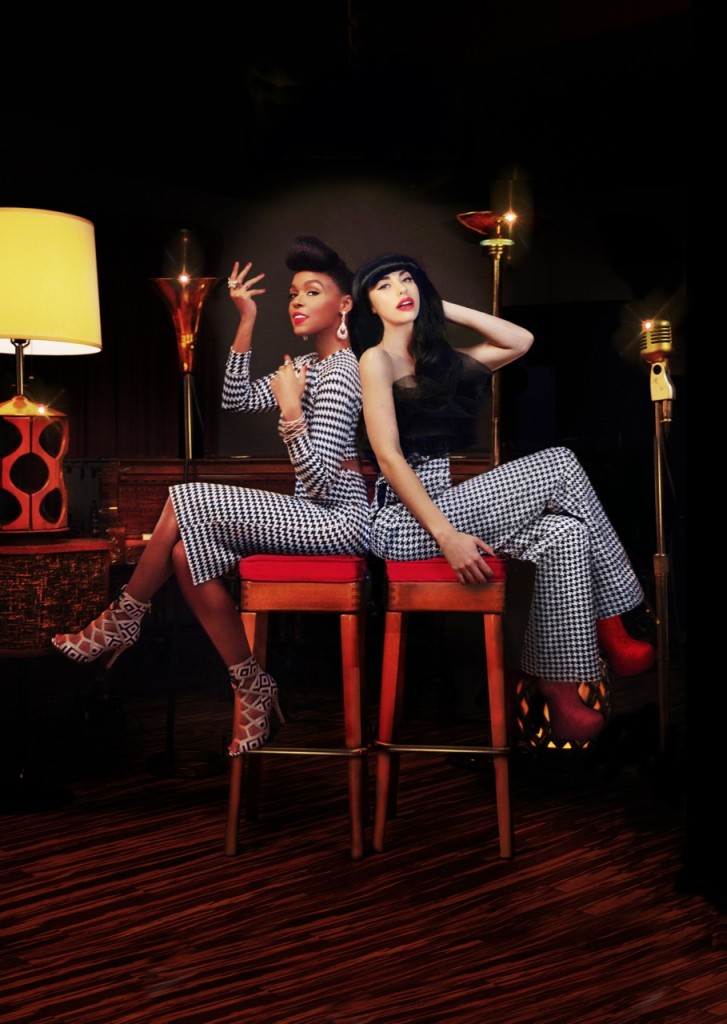 **** Janelle Monáe with Kimbra:
All Shows Cancelled Due To Illness.

It is with great regret that Live Nation announce that the remaining dates for Janelle Monáe and Kimbra’s Golden Electric Tour have been cancelled, due to Janelle Monae’s continuing illness.
END_OF_DOCUMENT_TOKEN_TO_BE_REPLACED

Kimbra performs “Settle Down” at Bardot. Kimbra’s debut album VOWS is out now.

END_OF_DOCUMENT_TOKEN_TO_BE_REPLACED

Celebrating 20 years since the first ever Big Day Out in Sydney 1992, which boasted incredible bands such as, Nirvana and Violent Femmes, the Big Day Out has had a reputation to uphold with line-ups that every year do not disappoint. This year was no exception.

For 2012, Big Day Out offered an impressive line-up that consisted of a range of rock, dance, pop and hip hop acts, including Kanye West, My Chemical Romance, Noel Gallagher, Soundgarden and Kasabian.

The morning weather was bleak, with rain and threatening storm clouds looming. However, the masses of music fans still poured into the Sydney Showgrounds from 11am, anxious for a sure day of excitement, great music and the ambience of bare flesh, and despite the weather, did not scare away the summer attire of short shorts and bikini tops.

Earlier acts such as Sydney rockers Papa Vs Pretty and Victoria’s Stonefield enticed crowds and brightened up the sky. The busy schedule of all six stages charged on and as the bands played and the crowds grew the storm clouds slowly disappeared and the typical Australia Day sunshine arrived.

Sydney indie-rock band Bluejuice owned the Boiler Room, with their infectious music and attitude whipping their eager fans into a whirlwind of odd dance moves and great times, especially when they erupted with their hit, “Broken leg”.

Boy and Bear were another standout act in the afternoon as they took to the orange stage and showed why they were recent ARIA winners with their amazing cover of Crowded House’s “Fall at your Feet”, which commemorated Australia Day with the crowd enthusiastically singing along.

Kiwi songstress Kimbra had her audience enthralled as she took to the Converse Green Stage thrashing about and singing her lungs out of her waif like frame. Her powerful voice was contagious and her act was a definite standout of the festival.

Jersey alt-rockers My Chemical Romance pulled a huge crowd at the orange stage, with front man Gerard Way sporting new blonde locks and clad all in black, led their set through an impressive range of tracks off their discography including old favourites “I’m not okay” and “Helena”.

Brit indie-rockers Kasabian were welcomed to the blue stage with flashing neon blue lights and smoke slowly filling the stage, as their crowd erupted in cheers, eager to welcome Kasabian back to our shores. “Shoot the runner” as always was a definite crowd-pleaser and resonated with festival-goers long after their set finished.

Kanye West did not disappoint as he took to the blue stage for his hour and a half long set where he dominated the other acts of the night. With his eye-catching back-up dancers to his rather unique dress sense and contagious tracks, Kanye West delivered a fantastic set.

Amongst all the great music on the six stages, the Guvera skate ramp always had their crowd entertained; however it was when Tony Hawk took to the ramp that the skate ramp attracted more festival-goers that even some of the headliners. It was a moment not to be missed, and the epic skating was a nice break between the countless sets to take in.

Celebrating an amazing 20 years of festivals Big Day Out came home to Sydney this Australia day despite earlier problems involving the spilt of co-founders Ken West and Vivian Lees, as well as the announcement of BDO’s withdrawal from New Zealand next year. This dark news however, did not impact the festival and West said that the festival will come back stronger and that Big Day Out’s heart will always remain in Sydney, as it began here 20 years ago.

Once again the Sydney leg of the Big Day Out tour delivered an amazing Australia day to all the music lovers who bared the bipolar weather for a day of great music and experiences.

Big Day Out – it’s not just a music festival. It’s a fashion show, the latest summer clothes coming out to play (2012 including girls shortest short shorts, guys screen printed singlets and a whole lot of hair on everyone). It’s a test of the strength of boyfriends’ spines as they hoist their girlfriends high above the crowds on their shoulders. It’s a feat of endurance, a challenge put to the elements that no kind of weather can stop the show, a day of sunscreen and sunburn, of thrills, friendship and fried food. And yes, there is some excellent music as well.

The Gold Coast leg of the festival kicked off at eleven a.m. For those of us travelling from further afield the day started much earlier, a mixture of trains and shuttle buses becoming more and more crowded with others in festival garb as we neared the event.

Ticket checks, bag checks, ID checks done and we were in. The sun shone brightly, the outside glare making us squint to make out the shape of Abbe May and band on the contrasting dark stage, their hard rock carving through the muggy air.
END_OF_DOCUMENT_TOKEN_TO_BE_REPLACED