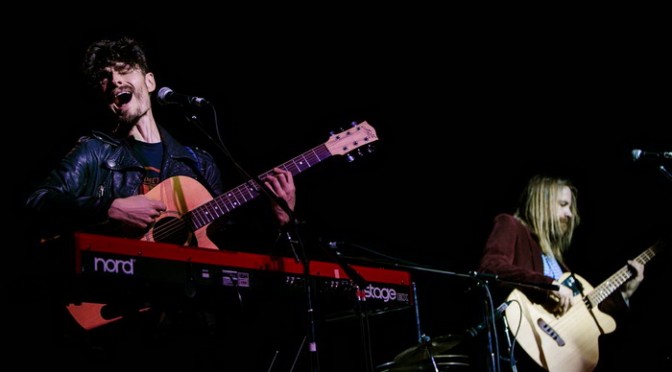 Review and photos by: David Jackson

Give me twenty good reasons, well to be honest after last night I could give you four hundred. That was the size of the crowd that ventured out on a Wednesday night and witnessed this unique three piece last night on stage in Newcastle.

It is hard to believe it has been 10 years since Thirsty Merc released their first studio album. On Wednesday night the band took the stage in acoustic mode in Newcastle to celebrate this achievement. The band consists of Rai Thistlethwayte (vocals, guitar, keyboards), Phil Stack (bass guitar), and Matt Smith on guitar. Known for giving powerful live performances the band that settled on their unique name courtesy of Thistlethwayte’s petrol hungry Mercedes Benz has spent considerable time during the past couple of years in hiatus, the bands last studio album was in 2010.

Taking the stage looking relaxed the three piece took the audience on a journey. Sure there were the hits but there were also great stories about family as Thistlethwayte reminisced on the relationship with his father. “Someday, Someday” was introduced early into the set as was “Emancipate Myself”. It was a powerful set and very satisfying to the thirty year old plus audience. “20 Good Reasons” brought the house down and signalled an end to the bands performance, sung out loud by the house the song brings as much to the new millennium audience as any pub classic did in the 80’s. Loud and proud the crowd made enough noise to bring the band back for the mandatory encore. “Here is a song that typifies the weather at the moment”, as the band played another hit “In the Summertime”. “It’s been ten years since we started but we are all looking forward to the next ten which leads me to think where will this band be” Thistlethwayte said. Given the infrequent recording, live shows and touring, will it be a once every two years encounter?. With this much talent on board I certainly hope not. Tight performance, great musicians and well worth a ticket purchase.