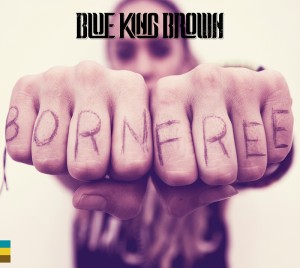 Blue King Brown, Australia’s socially conscious premier live urban roots & reggae powerhouse release their new album, BORN FREE, on November 7, 2014. Always pushing musical boundaries, the band’s idea was to break into new ground with this release. Lyrically, the album is the distillation of the raw essence of Nattali’s truth. Musically it’s an adventure that explores the international vibration that is ever evolving around BKB. First single All Nations, which comes with a profoundly provocative film clip, was instantly added by triple j.

“We continue to shape music for this movement, for the battle and the fight for People Power over profits, Justice over Greed, Freedom over all forms of Slavery and to bring balance to the all the corporate noise in the ears of the youth, because it’s time for The Truth, and so we play our part in these shifting times, taking inspiration from our global family and creating music that we hope contributes to forward positive movement in the daily lives of all beings awake, those waking up and those yet to open their eyes and realise the fundamental injustices in the systems we’re living under.” Nattali

Work on the album began back in late 2012 and rolled on through 2013 in BKB HQ studios in Melbourne, with a production team that included Styalz Fuego (360 / 2012 Aria Producer of the Year), Mista Savona (Australia) and Chris Macro (producer / engineer from New Zealand, Macro Dubplates, Scribe / Katchafire). The songs “Fyah”, “One People” & “Righteous One’s” were recorded in Kingston, Jamaica, after Nattali and Carlo followed their muse to dive deeper into collaborations that were sparked mid 2013 in Melbourne in a chance meeting and studio session with ‘Notis’, the hot production team busting out of Kingston, Jamaica. The album was mixed by James ‘Bonzai’ Caruso, the multi Grammy Award winning mix engineer of Damian Marley, Stephen Marley, Gwen Stefani and many more. The album features collaborations with Jamaican legends, The Congos, the new revival Jamaican artist Jesse Royal (who recently dropped a mixtape presented by Major Lazer) and Logan Bell from New Zealand’s legendary Katchafire.

“After spending most of the year in studio mode and off the road, we are proud to be bringing our new album, BORN FREE, to the world, and returning to the stage with the full force live show.” – Nattali

Their power packed live show is second to none & now world renowned, they’ve played across the planet, through Europe, UK, Canada, USA, & Japan rocking crowds from Tokyo to Texas and everywhere in between and have shared stages and with the likes of SANTANA, Damian Marley, Julian Marley, Spearhead, John Butler & Lauryn Hill to name a few. An Australian festival favourite, International tours have also included appearances at Glastonbury (UK), Montreal Jazz Fest (CAN), Summersonic (Japan), Reggae on the River (USA) & Ostroda Reggae Festival (POLAND), Gurten Festival (Switzerland) to name a few.

Blue King Brown will play a limited number of shows in Australia’s capital cities in December 2014 and January 2015, before founding members Nattali and Carlo return to Kingston, Jamaica, where they spent most of 2014, as their global musical adventure continues. Exciting things on the horizon coming, keep your ears to the ground.
BORN FREE – ALBUM RELEASE TOUR