END_OF_DOCUMENT_TOKEN_TO_BE_REPLACED


However, if Ortega’s new material gets enough airplay, it may just be enough to secure her a place of her own in the heart of country music fans. Marrying sweet vocals with twangy guitar riffs, cheerful rockabilly tunes and clever lyrics, Little Red Boots stops short of being cliché to sit firmly in the middle of brilliance. The music is strong on lap steel , harmonica and slow acoustic guitar but the instrumentals come second to Ortega’s vocals, which shine through in every song.

The album and eponymous single are named after her signature red boots that she got while on tour with Kevin Costner. This personal connection sets the tone for the album, which seems to really give a glance into Ortega’s own world.

Ortega’s third album kicks off with ‘Little Lie’, an enticing tune with a kicking beat underscoring lyrics about lying to a lover.

Upbeat rockabilly track ‘Bluebird’ quickly showed its capability for getting stuck in my head, with its infectious chorus and truckloads of bounce. It reminded me somewhat of Kasey Chambers’ more recent tracks, but without the nasal tones.

Ortega also shows a knack for melancholy anthems, shifting the tempo down in songs such as ‘When All The Stars Align’ and ‘So Sad’.

In ‘Angels’ Ortega shows off slightly warbling but strong vocals against plucky bluegrass with plaintive lyrics.

‘I’m No Elvis Presley’ is an incredibly fun song as Ortega belts out tongue in cheek lyrics- “I’m no one, not legendary, I’m nothing extraordinary” to a soundtrack of rapid lap steel. Ironically the song has an underlying beat and riffs which reminded me somewhat of Elvis’s style, but with a country edge. I’m talking ‘All Shook Up’ and ‘Blue Suede Shoes’.

Little Red Boots is Ortega’s personal anthem but it is perhaps too close to her own heart to really capture anyone else’s. To me, this song seemed to embody the worst side of country music with the lyrics lacking meaning and the music lacking vibrancy with slightly too much jolt. That said, I feel like it would probably suit its purpose in a live context… imagine Ortega strolling onto stage in her red boots and busting out with that song straight up. However, it kind of falls flat on the album.

‘Jimmy Dean’ is relentlessly catchy with a haunting edge as Ortega sings of “the ghost of Jimmy Dean”.

The album rounds out with ‘So Sad’, an incredibly melancholy number with soaring vocals.

Little Red Boots is an album to set toes tapping, with a great mix of upbeat and slower songs. I love the amount of pop culture references on the album, from Elvis to James Dean to songs that seem to hark back to other great country songs. Forlorn lyrics about lost love are matched with upbeat tempos to temper out some of the sadness, while positive numbers are positively jumping with energy. After this gets some airplay, the singer dubbed “Indie Lindi” mightn’t be much of a secret anymore.

Love it, like it, it’s ok or it’s just not for you… Leave a comment below and tell us what you think. 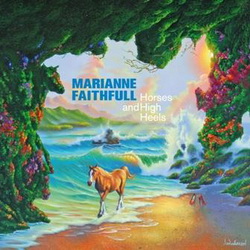 I was a little disappointed when I discovered Marianne Faithfull’s latest album Horses and High Heels consisted mainly of covers. The folk singer better known as a former lover of Mick Jagger during the heyday of the Rolling Stones has over thirty years of singing experience, and I was rather hoping to hear a full body of original songs rather than the mere four present on her 23rd solo album.

Nevertheless Faithfull has gathered a stellar group of supporting artists such as Lou Reed and Dr John to flesh out the album, turning her hand to songs from across a wide range of genres and styles. Produced again by Hal Willner and recorded in the New Orleans French Quarter, the album makes use of New Orleans musicians in the band.
END_OF_DOCUMENT_TOKEN_TO_BE_REPLACED

Buddy Miller has teamed up with other country guitarists Bill Frisell, Marc Ribot and Greg Leisz to create the solid, if occasionally tired instrumentals that form the backbone of most of the tracks.

“Cattle Call” starts off with an extended instrumental that is pure bluegrass, lonesome and twangy, with the eventual addition of Miller’s mellifluous vocals and a tinge of yodelling.

In “No Good Lover”, Miller teams up with Ann McCrary for a duet with bite, focusing on the demise of a relationship, with McCrary’s bold vocals the true focal point for the song.

“Meds” is a melancholy lament founded on sweet but slightly bland vocals from Lee Ann Womack. Chocolate Genius’ cover of “Dang Me” has a distinctly soul edge which seems slightly incongruous.

“Bury Me Not On The Lone Prairie” with deep vocals from Marc Ribot is dark, edgy and a little on the raw side. “That’s The Way Love Goes” is sweet and tender with finely honed vocals from Shawn Colvin.The instrumental version of “Freight Train” comes across as light and charming, yet thoroughly accomplished.

Ultimately, this is a very mild album, and I couldn’t help but wish that things would spice up occasionally. All the same, the tracks are fairly easy to listen, with nothing too unpleasant in the way of instrumentals or vocals, apart from a slight want of pizzazz.

“If You Let Me In” is straight forward rocky with hooky, repetitive lyrics and lots of vocal harmonising. “Fairground Luck” has an infectious melody that’s occasionally reminiscent of “Lean On Me” during the verses with strong riffs and Jones’ charismatic vocals carrying the choruses.
END_OF_DOCUMENT_TOKEN_TO_BE_REPLACED 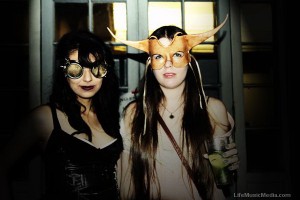 It wasn’t a typical night out, but as the Old Museum in Bowen Hills came alive for the Bohemian Masquerade, it promised to be a spectacular evening. The event was spread out over two large rooms and a verandah, with decadent costumes and masks adding to the amazing atmosphere.

The first room started out with house music, before transitioning into a range of DJs and bands which got the crowd dancing. END_OF_DOCUMENT_TOKEN_TO_BE_REPLACED

This song is followed up with a later track on the album called “Monster Parts 2 &3”, and starts off with eerie organ, echoing vocals and a tempo that steadily gets faster, before breaking into edgy riffs and screaming vocals.
END_OF_DOCUMENT_TOKEN_TO_BE_REPLACED

slightly gravelly vocals giving the song a melancholic feel. The occasional chime of bells adds to the atmosphere, as does the addition of slightly seventies sounding electric guitar.
END_OF_DOCUMENT_TOKEN_TO_BE_REPLACED

END_OF_DOCUMENT_TOKEN_TO_BE_REPLACED

eerie intro and punchy vocals. “Leave Yourself Open” is slower with great harmonies between Foster and Nitkiewicz, with harmonica woven into almost hypnotic instrumentals. END_OF_DOCUMENT_TOKEN_TO_BE_REPLACED

changes which add to the track’s originality. Plath’s lyrics are introspective comments about living in a stressful world to which many people would be able to relate. Her vocals are imbued with both honesty and a sense of heart that makes listening seem like a deeply personal act. The music meanders for a while, almost seeming a bit lengthy, before coming to a powerful crescendo towards the end of the track, and then fading out softly. At The End of the Night is a slow-burner with a lot of emotion, and worthy addition to any compilation.

Bec Plath – At The End of the Night is available at iTunes:

“Echo Stick Guitars” is an amazingly catchy track that starts out with synthesiser and almost robotic sounding high vocals which become loud and chanty for the chorus. The song switches tempo back and forth, showcasing a sound which can only be described as unique. Sure, the lyrics mightn’t always make sense (“Hey champions, hey violins, hey echo stick guitars”) but this shouty pop song had me singing along for the chorus.

“Antidote” is somewhat reminiscent of a Kisschasy love song with its subtle vocals and rolling drums. “Live in The Dark” has a somewhat bold psychedelic sound that’s as complex as it is likeable. “Too Much In My Mind” is an upbeat number with a catchy rhythm, some cutesy synth and fun lyrics about the downside of being too introspective. “Hidden Buses” takes a softer accoustic tone, complete with husky vocals.

Closing out the album, at six minutes long, “You Are Adored” is a musically diverse, romantic (albeit slightly long-winded) ditty that made my heart melt a little bit.

“Dear Darkly” is a fantastic showcase of The Boat People’s scope for diverse, unconventional pop. From the sounds of this album, this band isn’t afraid from playing around with sounds and genres, and that is definitely a good thing.