With all the right pop sensibilities for success, the fivesome release their third single off the EP, Daisy Eyes which lures the listener into a blissed-out wonderland of swirling hooks, impossibly catchy drum lines and psychedelic harmonies. Daisy Eyes is a contagious coupling between the sunny dream-pop influences of the 50’s and 60’s with a shimmering contemporary perspective. The nostalgic undertones balance out this upbeat offering, leaving the listener with a complex tune that will resonate with the inner romantic.
END_OF_DOCUMENT_TOKEN_TO_BE_REPLACED 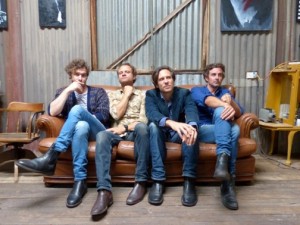 END_OF_DOCUMENT_TOKEN_TO_BE_REPLACED

Mayo is the front-man of Adelaide pop-rock band Special Patrol who’s found just enough internal artistic drive to branch out on his own.
END_OF_DOCUMENT_TOKEN_TO_BE_REPLACED

Following a stupendous introduction to Sydney fans in February, the band will return to The Annandale Hotel on April 11th to officially introduce their new album ‘Church Of The Open Sky’ released on April 16th on the independent Bombora label through MGM. On April 20th they’ll turn on the local Newcastle fans with a special show at Lizotte’s at Lambton. From there THE BREAK team up with their mighty mates The Hoodoo Gurus as special guests for select shows on The Gurus ‘Purity Of Essence’ tour. Being old mates expect the unexpected as the two bands hit the road for the first time ever!
END_OF_DOCUMENT_TOKEN_TO_BE_REPLACED

END_OF_DOCUMENT_TOKEN_TO_BE_REPLACED

Because the thing about MGF, was that when you stripped away all the nudity, controversy, prop gags, glam-porn and party threads for which they were infamous, at the bones of the band was one core strength, without which, all would have amounted to naught. Namely, the songs themselves were brilliant.

Sometimes an album comes along that resonates. Something that sounds immediately relevant and is so unmistakably honest, that no matter your musical taste, there’s a deep founded respect and due reverence noted. Drum Media called it “a classic pop sense that doesn’t get bogged in its own vision of itself” (Aug 08). Rip It Up Magazine were straight to the point: “In an age of downloads and ringtones, Skipping Girl Vinegar stand out from the pack”.

Skipping Girl Vinegar are proud to announce the release of their debut album Sift The Noise. An alt acoustic saturation of melody and pop hook described by the band as ‘music from cold places’, Sift The Noise was recorded in living rooms, bedrooms, kitchens and studios across Melbourne – as well as ‘The Lookout’, a beach shack in Aireys Inlet. The album was mixed and mastered in London, New York and Nashville by Adrian Bushby (Ben Kweller, Gomez, Foo Fighters), Greg Calibi (Bob Dylan, John Lennon, David Bowie) and Brad Jones (Josh Rouse, Bob Evans) respectively.