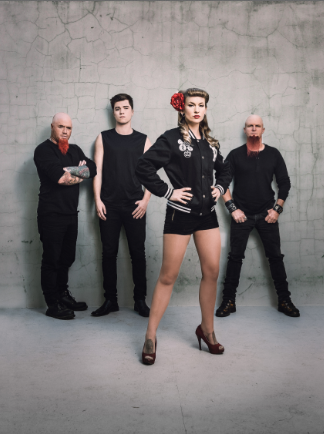 New Zealand rock band DEVILSKIN are in a league of their own, achieving Gold for their debut album WE RISE after only 2 weeks and remaining as the Number 1 album and Number 1 Kiwi Artist Album for 3 consecutive weeks. This week their tune Little Pills was placed #2 in NZ Rock FM 1000 countdown which was the highest ever placing from a NZ band. Paul Martin from Devilskin took time out to answer a few questions for Life Music Media.

Today my favourite album is Ozzy Osbourne – Diary Of A Madman

Stick To Your Guns, And Shoot Em If You Need To!

Planet Of The Apes.

Tour the world playing, writing and recording music that moves and motivates people.

A USA Dean ML DBRoots Guitar and a #1 album.

After a short run of dates along the East Coast in early September Devilskin are already planning more Aussie shows before the end of the year. Connect with Devilskin at the following links for all updates.