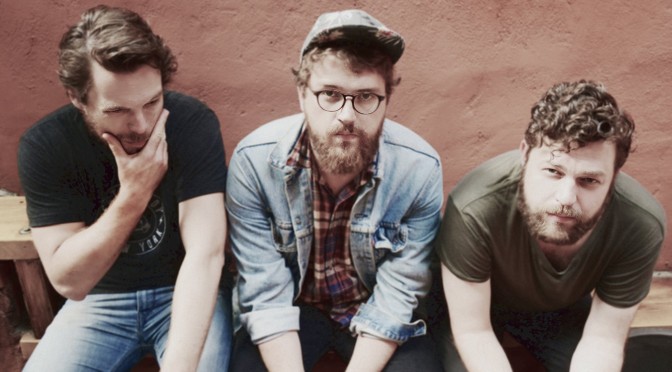 Folk rock, or folk music in general, has a lovely and delicate way of popping up every now and then, pushing aside the likes of Katy Perry, Macklemore or other popular mainstream artists and taking a place high on many music charts around the world. And there is no denying that when a folk song makes its way there, that people get on board with it. Case in point, ‘Little Lion Man’ by Mumford & Sons, ‘Skinny Love’ by Bon Iver, or ‘Ho Hey’ by The Lumineers etc. I’ve made my point…

Andrew Davie, Joey Haynes and Kevin Jones are three gentlemen who are likely to join the ranks of their folk music peers, as their band, Bear’s Den, release their debut album in October, ‘Islands’.

The album starts off on a solid foot with leading track ‘Agape’ (which was also featured on their first EP of the same name), and in true folk form, it begins with the banjo strings twang, duel acoustic guitars strumming and stomping drum beats. A solid formula that is tried and true to it’s genre, and while there are variations on how each song sounds, it doesn’t stray too far from the path with its structure. The leading track’s strength, and this goes for many other songs on their album, is that when the harmonies between all three members kick in, you can undeniably feel it. There is a rawness and sincerity that Bear’s Den delivers with their vocal talents that set them apart from many of their folk peers.

The album features ten tracks, some of which their followers have possibly heard before, including ‘Isaac’ (from the Agape EP) and their hugely acclaimed single Elysium which was released earlier in the year. Elysium serves as a nice change of pace for the album with its triumphant and uplifting horn section.

Lyrically, Bear’s Den, are fantastic storytellers. It’s hard not to listen to this album and envision sitting around the fireplace while you hear these stories being told.

Don’t be expecting the fast paced, foot stomping, banjo shredding antics that Mumford & Sons have given us, instead, expect something much more raw, emotive and sincere. It’s a solid beginning for Bear’s Den, and a must have for folk music enthusiasts.