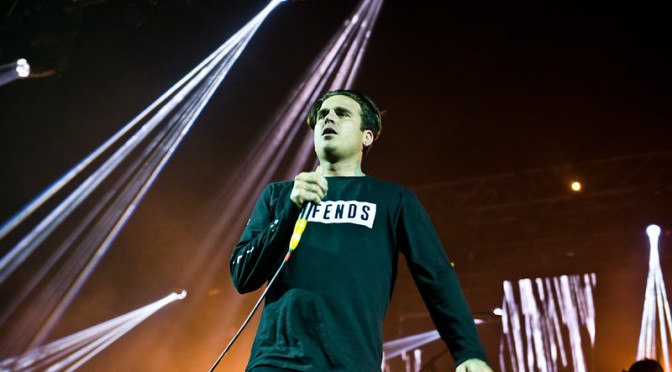 Arriving at The Hordern Pavilion I found myself meeting a swarm of dark cladded fans, sporting their war paint indicating that the night would be anything but peaceful. But who can blame them? With a line-up that boasts a solid blend of homegrown talent and international stars, what awaited everyone was a fierce display of talent and memorable performances.

With 5,000 die hard fans trying to getting into the show, the beginning of the night seemed slow and to tie that in with compulsory check-in for bags. The stage was almost bare when Deez Nuts arrived. Throwing their unique blend of Rapcore with heavy undertones, the boys played to faithful fans who made damn sure that they would witness the whole set and while things started to pour outside, the heated atmosphere inside the venue opened up the opportunity for a warm-up moshpit.

Next up was New York hardcore outfit Stray From The Path, giving off a very Limp Bizkit vibe with their overall sound. The crowd ate up everything they had to give, from overactive stage movements to the constant battering of their instruments. Andrew Dijorio was brutal in his transitions between pinpoint clarity with his raps and uplifting raspy screams.

Black Friday was a clear rise to arms, causing everyone to raise their fists against the ideals of consumerism and pointless association with material possessions. It was with this single song that the band drew the most out of the crowd and truly awoken them for the night.

Soon one of the most anticipated bands of the night would approach the stage and ultimately break the hearts of so many fans. Launching straight into Life of A Nine Issues demonstrated why they were adored by so many. Having crafted a fine blend between Hardcore and Pop elements, the band executed perfectly timed breakdowns to really immerse you in their sound. Though Tyler Carter was a little off on the night, Michael Bohn demonstrated that his sound is a pure as their recorded material.

Which such a strong start, it was so disheartening that these boys only played a 15 minute set. Many (including myself) felt robbed and wished for some kind of retribution for what could have been a great set from a fantastic band. Tension saturated the crowd and soon this feeling of anguish turned sour, the people wanted to let loose and needed a method to vent out.

With no objections, Architects happily complied with this request. By far the most brutal band of the night, they didn’t let up on their intensity for any part of their set. Deep growls, intense chugging and deafening drumming were core elements to this set and acted as the perfect backdrop to the numerous circles pits that popped up within the mosh.

Lead singer Sam Carter expressed a noticeable amount of talent as he nailed the duel-vocalist role. His clean vocals came across with the right amount of volume and didn’t seem to be affected by the sinister screams that left his mouth. Another notable member of the band is Tom Searle with atmospheric control over the guitar; he easily dipped from extended solos to complex riffs without any expression of difficulty at all. Finishing strong with These Colours Don’t Run fans obeyed ever request Sam made during this final number, especially when it came to creating the only wall of death for the night.

Finally it came time for our headliners to grace the stage, The Amity Affliction were met with such excitement that anarchy soon fell upon the crowd. With a broken barrier and fans spilling onto and around the main stage, the performance was delayed just a little longer than many had anticipated.

Once everything was under control, the boys knew they had to make up for lost time. By showcasing their newest album, new and old fans immediately were able to launch straight in without any unfamiliarity with the songs. Don’t Lean On Me was by far the strongest number off the new album and was complemented with backing of visuals of the album cover coming to life.

Though their new material is great, it wasn’t until old school favorites such as I Hate Harley and Anchors were played that the night really got going. It seemed a second wind kicked in the crowd causing the whole venue to fill with cheers. The people present have been fans who stayed loyal to this band for years and the expressions of satisfaction were present on everyone’s face deep with the moshpit.

Ending their encore with Give It All the self-explanatory title gave the only instruction needed to finish the night. Literally half of the moshpit opened up to allow those last minute chances of letting loose. Sweat drenched bodies collided and bounced off another without any signs of letting up. Though as the song faded away the crowd was subdued, all knew it was finally time to call it a night.

As we all left the venue, I took a moment to reflect on the night as a whole. This marked the third instance where I managed to see Amity live. For all that I can remember, I have never been disappointed with their performances and as I looked around, I felt that this was a mutual feeling. It brings such pride to have such a predominant Australian band reach these heights and continue to smash them.

I, like everyone tonight cannot wait to see what’s next for these boys.

Photos from the night!
Headliner: The Amity Affliction – photos here 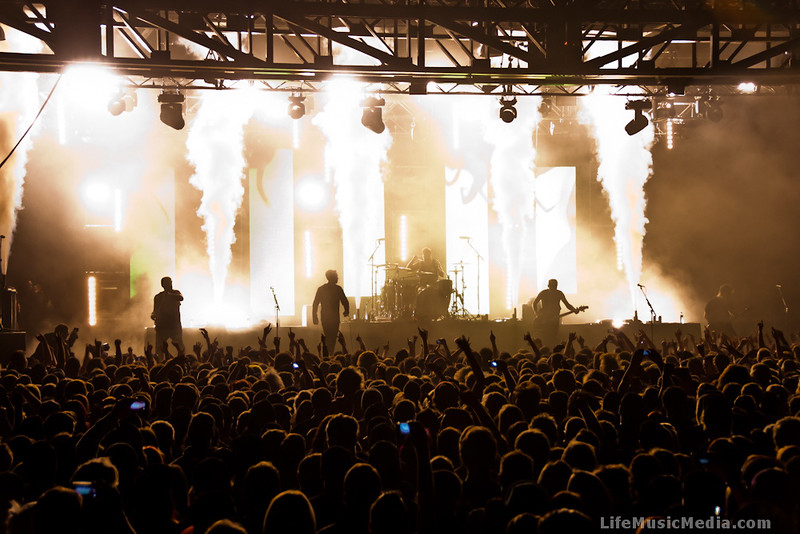