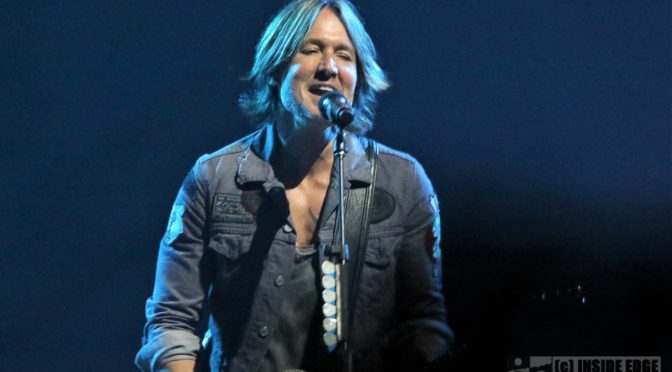 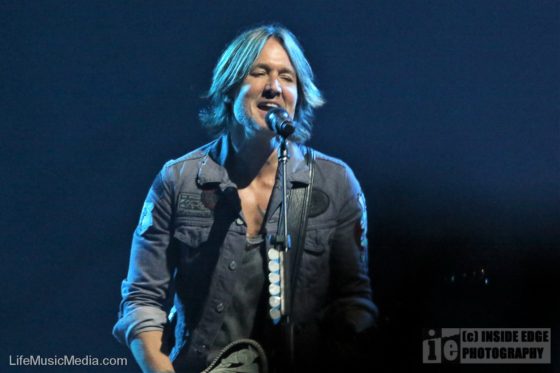 The opening night of the Australian leg of Keith Urban’s GRAFFITI U tour followed the special one-off show supporting the farmers in Tamworth, and it was clear from the start that the good vibes were still very much in play!

A pretty much sold old venue, pretty full despite the early start, saw a lively set from support act Julia Michaels, a highly accomplished pop songwriter for the likes of Britney, Bieber, and Gwen Stefani, who kicked off her own singing career 2 years ago. With a full band, Julia delivered a slick, up-tempo pop country set, including Issues, the Grammy-nominated track from the recent 50 Shades movie.

After the short break, the absolute superstar that is Keith Urban appeared in silhouette at the back of the stage, and the band kicked off Never Coming Down from the new album, followed by Days Go By from 15 years earlier. Keith sings most of this one from side of stage, before rolling into the single he wrote with his support act, Coming Home.

Then we get an impromptu review from Keith of a few banners and signs, including a “Please Will You Play At My Wedding” which saw the young lady hauled up onstage, and on discovering her fiance was at home, Keith ‘face-timed’ along with 10,000 fans, for a chat! A couple of selfies with Keith and the crowd, in a really easy, informal way, and then we are back off with the music, and Somewhere In My Car from the FUSE record.

Unsurprisingly Keith has a super tight band of multi-instrumentalists, including Jerry Flowers from Keith’s initial band, The Ranch, on bass and guitar, Danny Rader on guitars, keys, banjo and mandolin, Seth Rausch on drums and Nathan Barlowe on keyboards and guitars – and the sound in this large tin-shed is of superb quality. But there is no doubt where the focus is, on the ever-smiling front-man, who, just quietly, can absolutely rip on the guitar.

There is great interplay between Keith and Danny at the start of Long Hot Summer, and features a tasty solo from Keith on the riser stage front, teasing the crowd with fretwork, tapping and picking before the band builds it up behind him. A change of mood for the sensual Parallel Lines, and then the drums pick up the beat again for the ultimate driving track, Put You In A Song, which motors along like a Corvette on the freeway, and sees the crowd get stuck into one of several singalongs!

Keith delivers a consummate performance throughout, and picks up an acoustic for a cracking solo spot of bluegrass hoe-down guitar which slides into the older Stupid Boy. The crowd sings the start of Somebody Like You even before the band kicks in, and allows the Nathan Barlowe to show off his vocal talents in little cameo performance of With Or Without You, before the lights all go down, and Keith asks for some help – the Arena lights up from 10,000 phone lights!

A first-time outing for a new song written with Julia Michaels, from her forthcoming release, sees her join Keith onstage for a fun duet of Lie To Me, and then a real riff cranks up over an up-tempo beat, and we are back in stadium country-rock mode for Good Thing with Keith’s guitar really cutting through the mix. Slow down again for a delicate acoustic-tinged Blue Ain’t Your Colour, and then he swaps guitar for bass for the almost industrial-pop Drop Top which includes Kassi Ashton doing her vocal lines on the big screens.

The stage turns blue for the hit Cop Car which turns into a real rock ballad, and then both Danny and Jerry get their chance to sing a few bars and show-off, before the intro to The Fighter sees the crowd erupt – helped by Carrie Underwood doing her vocals on the screens. During this, Keith makes his way all the way through the crowd, high-fiving and hugging anyone in his path, to the “U Stage” at the back of the arena, where he conducts a more intimate singalong with a few friends, rips into a medley of Kiss a Girl/Who Wouldn’t Wanna Be Me/You Look Good in My Shirt while ripping the licks out of his guitar, and then pulls a young girl up onto the stage to hand it over as a trophy!

Keith makes the long way back to the stage where the band is still going, and the banjo intro to Gone Tomorrow (Here Today), and then a funky bass-driven version of John Cougar, John Deere, John 3:16 and a slick solo from Danny Rader. The set proper closes with the classy pop-rock of Wasted Time with a guitar duel and another crowd singalong.

You know he is coming back for more, and sure enough after a decent period of adulation, the crowd gets the massive hit from the new record sung with Lindsay Ell, Horses – and then it is over! What a show, from a truly special performer!