Tonight’s line up at Sydney’s Metro Theatre was nothing if not unique.

Each of the three bands possess highly distinct sonic aesthetics that set them apart not only from one another, but the rest of the current metal scene. It promised to be an interesting night of heavy metal and we’re sure no one left disappointed.

Melbourne’s Ne Obliviscaris brought their own enthusiastic crowd to open the night’s festivities. Not only did the six-piece (including a singing violinist in the form of Tim Charles) receive plenty of applause when they announced they were working on their second album, but the band wasted no time whipping the early crowd into a healthy mosh. Indeed, when Tim put down his violin and launched into the crowd for a mid-set crowd surf, the punters were only too eager to oblige. No doubt their mix of extreme progressive metal (complete with some black metal overtones and lush, extended instrumental sections) won them a number of new fans tonight as well.

Indiana’s The Contortionist wasted no time launching into a crushing mid-tempo set made up of a mixture of ground-shaking downtuned riffing and deep, atmospheric textural sections that give the band a vibe all of their own. Singer Mike Lessard seems to come from the Maynard James Keenan school of frontman style, leaving us quite unsure as to whether he’s actually a little mental, or just well endowed when it comes to twisted stage presence.

The extreme virtuosity of North Carolina’s Between the Buried and Me, together with the band’s desire to inflect their music with myriad styles ranging from cutting edge tech metal to layered, keyboard-driven interludes and just about everything in between, has clearly helped align them with a broad fan base. There are all sorts here at the Metro tonight, along with a decent number of female fans, not all of whom simply appear to be bored girlfriends amusing their metalhead partners.

Singer/keyboardist Tommy Giles Rogers is a restless ball of energy that constantly darts from behind his keyboard to the front of the stage – all the while fist-pumping the air. There’s a certain sonic violence to BTBAM’s collection of influences and the effect it has on the cacophony coming from the stage. There are obviously no barriers to what they’re prepared to bring to their song writing either, regularly peppering their songs with seemingly disparate styles including jazzy interludes and odd-time signatures that must be making life hard to the head-banging crowds up front. They might be merely pleasing themselves with what they commit to record, but the crowd is lapping up every bit of it tonight.

Despite a mix that’s incredibly drum-heavy, making it harder to discern the complexity and intricacy of the finger-busting licks and riffs of guitarists Paul Waggoner and Dustie Waring, it’s still a great performance. Combined with the musicianship and originality of all three bands tonight, it’s smiles all round. 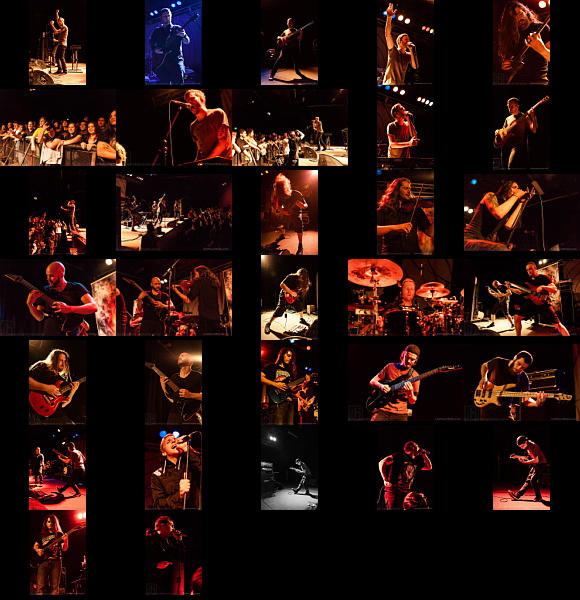