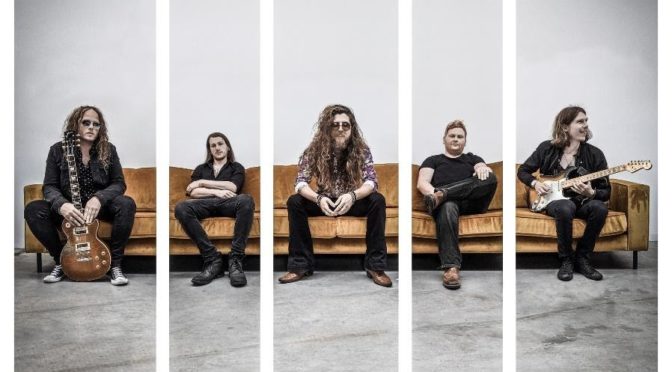 If you remember the excitement back in 2006 when The Answer, a relatively unknown band from Northern Ireland found themselves nominated for album of the year for Rise by Classic Rock Magazine, supported Deep Purple in London, and Whitesnake and Paul Rodgers across Europe to great acclaim…..then you might get a sense of the buzz that Bad Touch are generating across the UK currently.

Hailing from Norfolk, not the most rock’n’roll part of the UK, the band formed 10 years ago,  and owe the core of their sound to developing their blend of southern country rock in the rural surroundings of the area, and this lent itself well to the sounds of Lynyrd Skynyrd, Led Zeppelin, Free and The Black Crowes who made up much of their formative soundtrack.

For a change this is a band I have come across before – despite this being their fourth album – and the previous album Shake A Leg has been in regular rotation on the stereo in the past 18 months.   As part of the review process I got to ask frontman Stevie Westwood a few questions, and this might add a bit of quality to the content!

How do you see the resurgence of classic blues rock in the UK over the past 5 years?

“I feel that people are getting tired of Radio 1 rubbish. People are searching for more honest, raw music for their money, and this is benefiting the non-pop/less commercial/underground scene. I for one am hugely thankful that Bad Touch are a part of this pendulum that’s on the back-swing towards feel-good rock music for the soul.”

Kiss The Sky was recorded, produced and mixed by Nick Brine at the legendary Rockfield Studios in Wales – the location of so many cracking rock albums.

“Completely jaw-droppingly awe-inspiring. We are so privileged as a group of friends to have recorded in a place with such musical gravitas. It really did kick us up a notch as musicians, and just felt so right. Plus I got to sit at Freddie’s piano, the one he wrote Bohemian Rhapsody on, it doesn’t get much cooler than that.  Funny you should mention ghosts; for one track we set up a microphone in the corridor and let it feedback through the control room speakers, it was beautiful and eerie in equal measure, and is used on the finished album.  So the ghosts of Rockfield have added their touch to Kiss The Sky.”

The opening riff of Come A Little Closer has got class and hooks to burn, driven along by the bass and drums, and when Stevie Westwood piles in with the vocals you can’t help but be impressed.  The whole band is on point with the backing vocals too, and this is a cracking and slightly frenetic opening to the record.

Who are your main vocal influences Stevie?

“Everyone is an influence, every performer, singer or front person I’ve seen. I’m like a sponge. I take something from every performance I spectate. Not to say I enjoy every gig I go to, but I always make sure I take something away from it. Even if that thing is just, “What can I do to make sure I never come across like that on stage?”  But to name some names, there’s the obvious contenders, people like; Robert Plant, Paul Rogers, Chris Robinson, Ronnie Van Zant, Freddie Mercury, and so many of the vintage hall-of-fame. Plus more modern people like; Charlie Starr, Cormac Neeson, Chris Robertson and Chris Cornell, to name just a few.”

An equally catchy riff but totally different in feel is the latest single just released, I Get High (not what it sounds like Mum!) is a homage to the love of your life, and features a great solo with a real southern rock feel.  Stevie W gives the impression of being in perpetual motion on this, and you can see him chasing around a stage delivering the vocal.  Let Go gives us a third opening riff and then the dual guitars from Rob Glendinning and Daniel Seekings open up over the wonderful piano line which really brings the southern rock feel to the track.  Another gospel-tinged chorus with epic backing vocals takes us through to a perfectly-phrased ending.

The first track released off the album last month was the upbeat funky Strut, which keeps that southern gospel feeling going, and brings another dimension of harmony to the chorus before Stevie W spits out the “Wanna see you Strut…Strut….Strut!”  This really gets the feet stomping and will be an awesome live track………including the stripped back section that leads into the solo.

I would normally raise an eyebrow at the inclusion of a cover on a studio album, and this one is no different – the band has delivered a respectful and fun version of Kiki Dee’s I’ve Got The Music In Me (written by Bias Boshell back in 1974), but with the quality of the songwriting within Bad Touch, I wonder if it is really worth a place on the record – probably a great encore song or B-side but I’d prefer another original!

Stevie responded to my query on this – “We had toyed with the idea for some time, it’s a great track, and lends itself to our particular brand of up-beat, feel-good, foot-stomping rock; and we were just like, “Why not?” As a team we think it fits on ‘Kiss The Sky,’ and we’re super chuffed with how it has come out. We haven’t played it live yet, but we plan to in the future, so hopefully we can sway your opinion.”

It may be that Can You Save Me is the most complete and ‘authentic’ track on the record – with the light and shade of a classic rock ballad, and a real feel of the 70s in the guitars and chorus, and never let it be said that drummers can’t sing, as the backing vocals here from George Drewry are fantastic.  I heard the title track when it came out a few weeks ago as a single and Kiss The Sky absolutely hit the spot, with that signature combination of catchy riff, powerful soaring vocals and a ripper of a solo, while the band chime in with a raucous but melodic backing chorus!

The real ballad on the album is See You Again, a poignant tribute to the loss of one of the band’s Fathers, and a good friend to the whole band, and the inclusion of the strings really adds to the atmosphere, with lyrics that are a heartfelt memory of a much-loved mentor.

A really powerful groove lies at the heart of Before I Die which Stevie W compares to old-school Whitesnake and contemporaries The Temperance Movement.  There is certainly that feel of the Moody / Marsden combination in the riffs and twin solos, and the band kicks the song along with an Electric Boys funked-up beat.  Read All About It takes us back down South with some ripping guitar work from Rob Glendinning and a really loose chorus.

A short, sharp in your face rocker with some soul in the backing vocals picks up the beat in Too Much of a Good Thing, which has hints of those classic Kinks, Faces and Free songs, and the likes of Jet from Down Under.   Sun And The Moon is just sublime from start to finish, with so much variation, and a huge Zeppelin feel to the riffs and parts of the song, with a virtuoso vocal performance, and some wicked Hammond Organ adding to the layers.  The more times I listen to this, the more I hear in the background, and it is clear why the band have said they just love playing this one!

An extra track comes along in Something About A Kiss which has a different and slightly folksy feel to the picked guitars and the plaintiff opening vocals, and then out of the blue the song explodes and we get slammed with what might be the solo of the record.  Breathtaking stuff.

How are you all doing in the current Covid19 lockdown – it must be so hard from so many angles?  You have the September Tour to look forward to…….with fingers crossed, but I guess Ramblin’ Man must be in doubt?

“At this point I’m done being angry, upset and disappointed. Initially, I was beyond reconciliation, we’d put so much into the prep for our March/April tour and it fell apart a week before the first gig. But then, after some time in isolation, I came to realise, that we’re by far and away not the only people at a loss, and that some people had lost far more than just a bit of business potential. So you got to stay positive. This negative has given us time to hone our craft and focus as a unit, to make sure that once this weird time is over, that Bad Touch comes out the other side is bigger, better and badder than ever! With regard Ramblin’ Man and the tour, like everyone, we’re just taking it day-by-day.”

What will be the first thing you do as individuals and as a band when the major lockdown ends?

“As a band; have a really loud band rehearsal together in one room. For me; visit my Mum, Dad and sister, go down the pub for a nice cold pint, and never again take for granted a hug from a mate.”

Well said indeed – in the meantime we have the music to keep us sane!