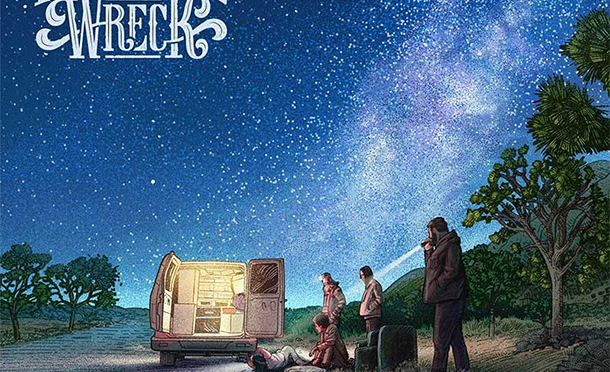 The heavy card envelope from the UK arrived in the mailbox here in Australia and out dropped the promo copy of this much-anticipated new release from Robert Jon Burrison and his crew – The Wreck!

In keeping with a growing number of Blues / Soul / Rock bands from the USA who I had not heard of until one or other discerning PR folk dropped their name, RJATW have been around for a fair few years and released a bunch of albums before this one, so I may be required to catch up with some more purchases, which in the current times is a great way of supporting bands who can’t get out there and tour.

The band has kept some pretty solid company in recent years, touring with the likes of Joe Bonamassa and Eric Gales, the Chris Robinson Brotherhood, The Cadillac Three, Black Stone Cherry, Lukas Nelson, Devon Allman and Walter Trout to name a few – and that cross-section of the Blues, Southern Folk Rock and West Coast soft rock pretty much covers what you get on Last Light on the Highway.

The warmth and depth of the introduction to Oh Miss Carolina, combined with the tone and harmony of the guitars and piano, really sets the scene with RJB’s soulful vocal delivery and the chorus is a southern rock ballad from the school of Lynyrd Skynyrd, that builds up with some southern rock riffs and a set of blistering solos as the gospel-tinged backing vocals soar.

There is a lilt and swagger to the beat of Work It Out that combines wonderfully with the horn section and backing vocals and takes us back to the 1960s with the soul influences – and the Australian connection comes out here with Mahalia Barnes, Jade McRae and Juanita Tippins doing some of the backing vocals on the album.    A Joe Walsh riff kicks off Can’t Stand It, and the track features some terrific dual harmony guitars from RJB and Henry James that maintains the Eagles vibe, while mixing it up with those gospel-like harmonies.

The goosebumps really kick in as Tired of Drinking Alone works its way into the veins, a country rock anthem destined to have the lighters and beers in the air, and some cracking slide guitar – the louder you play this, the more the emotion swells.

A classic Allman Brothers riff kicks off Do You Remember, and we get all of those southern rock characteristics as the track builds through the verse and chorus to the twin lead solos, backed by the piano and the rhythm section helps it all on the crescendo.  This Time Around has more of that groove, and brilliant harmony vocals, and some huge slabs of guitar through the middle of the song, before a stripped back chorus takes us out.

A ripper of a gritty slide guitar intro to Don’t Let Me Go, and a classic southern rock verse before a wall of sound erupts from the backing vocals in the chorus, all combining to produce one of the stand-out tracks of the album, with some neat drumming from Andrew Espantman that drives the track on.  Turn this up loud!

The electric piano and mellow vocals of One Last Time is another showcase for the pure and clean vocals of RJB (a bit like David Coverdale on Northwinds), and suggests that this will be quite one of the album, before out of nowhere the bands kicks into a massive raucous riff to provide the backing to the solo.  Another slow-burning start to Gold, a heart-breaker of a ballad that allows Henry to deliver a straight-up rock guitar solo which blends so well with the warmth and tone of the piano.

The album closes with the two-part title track, Last Light On The Highway Part 1 and 2, the first part being an almost flamenco guitar backing to the vocals which are slightly delicate and breathy, and deliver an atmospheric feel that is carried across to the contrast of the bombastic power of the guitars that open up part 2, before the tinkling piano and power chords remind us of those classic UFO pieces between Paul Raymond and Michael Schenker, and a surprising tempo change into the verse and a chugging guitar riff, that then morphs into a prog-rock battle between Henry and RJB on guitars and Steve Maggiora on keyboards, and the inclusion of the strings provides more of the epic feel, and we get a brief return to the Spanish guitar for the closing phrase, leaving you breathless.

Robert Jon & The Wreck are not the easiest band to pigeon-hole because their sound manages to bring together a bunch of those 1970s and 80s classic and southern rock styles, with a focus on keyboards more than just Hammond Organ, and the clean pure vocals of RJB, with some inspiring backing vocals that range from raucous to soulful gospel – and it all ends up being a glorious blend of joy which is pretty unique.