Drawn from Bees have spent the past two years sticking tight to a self-imposed schedule to write, record and release a body of work every six months, enjoying high rotation of hit single ‘Long Tooth Setting Sun’ across Australian radio including national youth broadcaster Triple J. With the fourth installment Fear Not The Footsteps Of The Departed due to be released on May 21, the mad goal-setting may have come to an end, though the prolific foursome are just reaching full stride on the live scene. Having just completed their third east-coast Australian tour, with an appearance at V Festival thrown in for good measure, Drawn from Bees will tour nationally around Australia in July to give audiences further afield a taste of their sharp, four-piece melodies which sit atop experimental indie-rock sounds.

Fear Not The Footsteps Of The Departed 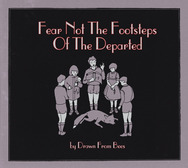