There’s a workman like edge to the stage as the steady four piece of Northern NSW’s Grinspoon launched into their set. The wild flailing and feigned punk-rock disinterest from frontman Phil Jamieson are long gone, in its stead are the once-ironic rock poses: the furious grip on the mic stand, the perfectly timed lunge on to the stage monitors and, crucially, the almost trademarked index finger thrust decisively skyward.

“Workman-like” isn’t necessarily derogatory. Here it points to a ballsy longevity which has seen its particular brand of skate-punk survive where countless others have faded away. The ‘Spoon is the sound of Triple J, coming of age along with the fledgling youth broadcaster when both were still in proverbial nappies. Easily considered the band most likely to burn out in a blaze of glory – thanks largely to the well publicised excesses of Jamieson – the group not only survived, but has managed to cross over the Great FM Divide and is now, justifiably, entering into legacy territory.
END_OF_DOCUMENT_TOKEN_TO_BE_REPLACED 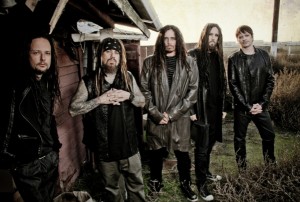 ‘The Paradigm Shift’ is Korn’s first time working with super-producer Don Gilmore, whose legacy also includes producing Linkin Park’s legendary ‘Hybrid Theory’ album. Gilmore recorded the album at Buck Owens’ studio in their original hometown Bakersfield, and at Los Angeles’ famed NRG Recording Studios. Korn initially announced Head’s return via a captivating clip on rollingstone.com, and went on to discuss the reunion in this in-depth interview with artistdirect.com, to much excitement from the band’s dedicated fan base and the music community.
END_OF_DOCUMENT_TOKEN_TO_BE_REPLACED