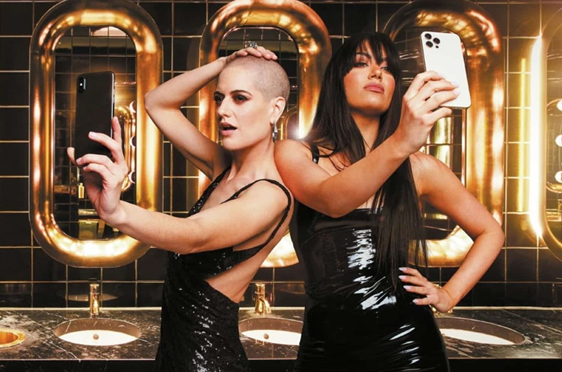 Thunder may be the band who will just never give up – having been a fan from the earliest Terraplane days in the late 1980’s, and having been lucky enough to be present at the 10th Anniversary “farewell” tour in 1999, and the 20 Years & Out show at Hammersmith Odeon in 2009 (despite moving to Australia in 1998) and even getting to shoot the sold-out Hammersmith Apollo show in March 2015, we felt thrilled to get the band to Australia in 2017 for some intimate, but very raucous club shows.

The band took a break after 2009, but came back fully energised in 2015 with the wonderful Wonder Days album, and since then we have seen Rip It Up the reprise album Please Remain Seated, and the 2021 release All The Right Noises? hit the mark with the same quality songwriting, consistent delivery, and attitude that has set Thunder apart from many of their peers, and has led to the longevity of their special relationship with the fans, old and new from 1989 to today.

Guitarist, songwriter and Thunder co-founder Luke Morley says: “’We didn’t set out to make a double album but as the writing and recording process went on we wandered into some interesting areas and then it became a case of ‘can we afford to leave any of this off?’ In the end we did reduce it from 20 tunes to 16 but it wasn’t an easy choice.”

Dopamine has been inspired by the world’s mass retreat to social media during the pandemic lockdowns, endlessly hunting for the next hit of happy hormones, and comes at what is hoped to be an exciting time for the band as the world starts to open up.  Their UK Tour kicks off on May 21st for a few major city dates, before they head out to Europe for the Summer Festival season, including Graspop and Hellfest.

Album number 1 opens with the first single taken from it, The Western Sky, with the solid crunch of the Luke Morley riff, and a verse that leads to a classic Thunder pre-chorus and soaring chorus line from Danny Bowes, whose voice seems to get better with every record.  The eastern-tinged solo rolls into a great set of drum patterns and accents before the closing chorus, interspersed with searing guitar breaks.   Staccato guitars open up One Day We’ll Be Free Again, with the first section being vocals and guitar only, before the band kicks in with a rollicking beat, and some huge choral backing vocals from the female accompanists who were so prominent on the last record.

An acoustic / steel guitar intro which bass and drums steam into under the vocals add some southern-blues grunge to Even If It Takes a Lifetime, which features the chorus of the record, providing echoes of some of our favourite Thunder down-tempo tracks.  The ladies give us some added texture in the backing vocals, a bit like Shine On You Crazy Diamond in feel.

Chris Childs on Bass and Harry James on the Drums provide the pounding intro to Black, which sees a cracking set of dark and intricate riffs under the chorus in particular.  This is one of those left-field Thunder tracks that is definitely from the songbook, but with a slight musical twist that sets it apart from the norm.  The interplay of the twin guitars of Morley and Ben Matthews is both clever and musically complex, and delivers the signature sound of the track.

Unraveling is a gentle ballad, featuring some lovely piano from Matthews, and church-like harmonies, and a slick solo from Morley, which provides a restful interlude before old-school Thunder kicks in again with the foot-stomping rocker of The Dead City.  You may have heard the main riff on a previous Thunder album, but it is twinned with an off-key chorus that contrast perfectly with the straight-up chords of the verse.  Danny’s wail then sets off a scintillating solo before a variation on the riff and some tight drum-work takes us back to the chorus to close.

There is that slight spaghetti western vibe to Last Orders which sees Danny and Luke provide the opening verse, with bass coming in for verse 2, along with some lead guitar breaks, before a two-time riff transforms the track into an almost Clash-like slammer, and sees the band let rip through the middle-eight and solo section.  This is almost “cyber-punk” Thunder – and it really works.  The first record closes with All The Way, massive drums, crunching riff and powerhouse vocals that evolve into a deliberate and solid beat, allowing Danny to really show off the vocal chords, and Luke’s guitar is really prominent throughout.  The mid-section sees dual riffs over crisp drum patterns before a sharp solo that drives into the closing choruses, featuring more guitar breaks, and a reprise of the solid intro to end the track.

The first volume has provided some absolute classic Thunder moments, both loud and soft, with ear-worms from prior albums that simply prove that the band has not lost their unique touch and sound, and a couple of deft touches and no little finesse that makes this more than “just another Thunder album”.

Volume 2 opens up with a signature Thunder sound, and Dancing In The Sunshine powers ahead with twin guitar riffs over a honky-tonk piano line, into a cracker of an insert segment before verse 2, harmony guitar solo, cracking drum fills and a catchy solo!  Big Pink Supermoon is one of those classic Thunder tracks, and Danny really delivers on the vocals, with the keyboard-driven melody over a rock-solid rhythm section.  Luke shows off with a quick bluesy solo, and then after another chorus, he lets rip with an outstanding second solo that merges into a slightly jazzy interlude with a great if unexpected sax solo, which rolls on to the fade.

The latest single from the album is Across The Nation and it is a belter of a track, destined for the live stage no doubt.  Typical Thunder lyrics, a rock-solid riff, more of the corking piano-work, and great big hook-lines in the chorus.  A powerhouse mid-section with lead breaks over the top, and then into another cracking solo.  A tear-jerker of a track is up next in Just A Grifter, with Danny showing real emotion in the lyrics and vocals, almost in French torch-song style, with piano accordion and strings behind the shuffling beat.

I Don’t Believe The World is another Thunder trademark sonic adventure, featuring a slow tempo, a dark melody driven by keys and bass, and a powerful string of guitar chords, some soaring harmonies in the chorus, and an uplifting solo before an accapella segment from the ladies that continues under the closing choruses, while Luke again delivers some searing guitar breaks.   An absolute monster of a track is Disconnected, featuring Bonham-esque drums from Harry, some clever double-tracked vocals in the verse, and one of those great Thunder pre-choruses before yet another catchy chorus, with some really innovative backing vocals that scream Beatles, that leads into a quick segment that is all Sgt Pepper!  There seems to be no end to the clever little touches that intersperse the record – all of which dovetail wonderfully into the traditional Thunder sound and feel.

The penultimate track is another plaintiff ballad, with Danny in fine voice over a delicate piano melody.  Is Anybody Out There may be the global cry erupting from COVID isolation, and the track builds through voice and piano to a powerful mid-song crescendo, before Ben provides a wonderful piano piece into the final chorus.   A stripped-back intro promises much from No Smoke Without Fire, and just over a minute in, the band piles in with a solid riff and thumping beat, a pre-chorus to die for, and then back to the bare bones for the first half of the solo, before it all kicks off again with the full band.  Lots of light and shade through the closing segment of the track, allowing Luke to deliver some final guitar licks.

The album will need a few more listens to really appreciate the depth and scope of what the band has achieved here, but yet again there is a sense of progression within the solid foundations of what is undoubtedly a Thunder album.  The band has nailed down their sound over the past 7 years, taking all of the elements that started out with Backstreet Symphony Day in 1989 and adding layers and levels of maturity to the overall package, making them a standout British rock band of the past 3 decades.  Long may they continue!

Tracklisting:
CD1 / LP1
The Western Sky
One Day We’ll Be Free Again
Even If It Takes a Lifetime
Black
Unraveling
The Dead City
Last Orders
All the Way

CD2 / LP2
Dancing in the Sunshine
Big Pink Supermoon
Across the Nation
Just a Grifter
I Don’t Believe the World
Disconnected
Is Anybody Out There?
No Smoke Without Fire

The album will be available in CD and double LP vinyl, with exclusive lenticular cover versions available only from the Thunder online store.

Listen to the most recent single released from the album: Across The Nation

First single The Western Sky has a groovy animated video: