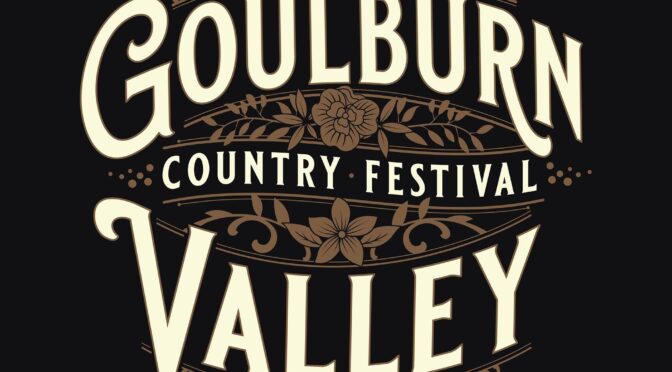 Driving down to what was a hometown gig, I was full of excitement. Nobody parties like a country crowd, and boy, was this a long time coming. From the beginning, I must compliment the promoters’ commitment to bringing this event to the town; after two years, who would not be excited.

On entering the showground, it had an authentic carnival atmosphere with show rides and smiles as far as the eye could see. I swear I saw a dodgem car, and I haven’t seen one of those for years. Goulburn Valley was a brand-new festival, and I have to say it ran like clockwork. The audience was treated to country DJs, line dancing, and whip-cracking between all artists’ sets.

The day began with Aunty Fay providing an appreciative audience with ‘Welcome to Country.’ The festival allowed local artists to highlight some of their compositions with a few covers thrown in for good measure. Proud Yorta-Yorta woman Madi Colville-Walker hit the spot with the audience with a killer version of the Ched Atkins classic ‘How’s The World Treating You.’

Robert K Champion, a proud Gubrun, Kokatha, and Mirning man from the far West Coast of South Australia, took the stage. Having a reputation for being a troubadour, I enjoyed his set. Each song had meaning and was from the heart; it provided the audience with a conduit between the story and music of this great land. I must confess I went and checked out his catalog on the way home and have been playing it ever since. This guy is bona fide, and I look forward to what he brings out in the future.

Cass Hopetoun hit the stage with a spring in her step, engaging with the audience from the first lyric. A look around saw a loyal and passionate fan base with audience members singing word for word. The song ‘Shots’ went over a treat with fans dancing behind the barrier. ‘Typical Bride’, the single released from her new album ‘Not your Typical Bride’, also went well with an ever-growing fan base. Nominated for a Golden Guitar for Best New Talent Cass brings a fresh face and plenty of talent to female country music in this country.

The multi-talented instrumental duo, The Davidson Brothers, demonstrated why they are the most sought-after bluegrass players in the country. Playing a set full of songs from their past eight albums, the guys were on point; this, combined with humour on the one bill, undoubtedly added to their ever-growing fan base. I have seen brothers Hamish and Lachlan multiple times; their back catalogue means they have a lot to choose from. My Highlights were ‘Take me to the mountain’ and a new song, ‘All You Need is Music’. With Lachlan on fiddle and Hamish shredding the mandolin, you are left spellbound by the talent of these likable siblings. With eight golden guitars and a worldwide fan base, it was great to see them live again.

The honorary patron of ‘The Dog on the Tucker Box’ at Gundagai, Andrew Swift took the stage with a combination of music craftmanship and humour. The jokes are funny, and an anecdote about dating disasters rang true for many of us around the showground. Since collecting a couple of golden guitars “Swifty” as his is known to his mates has developed his craft significantly over the past couple of years. Touring the country in a caravan (someone once told me he once renovated them). Andrew’s style of music provides ballads with his roots firmly in Australian country. Having Cass Hopetoun join him for their recorded duet ‘Say the Word’ was a real highlight. This artist is authentic and well worth a listen.

Having not seen Felicity Urquhart for over two years, I was looking forward to seeing what new product she had to offer. Collaborating with The Waifs Josh Cunningham, she has spent the last year promoting and occasionally touring on their album ‘The Song Club.’ Felicity is a seasoned performer, and the last time I saw her, she carried away so many Golden Guitars that she almost gave herself a hernia. While Frozen Rabbit (an award-winning album) did feature in the set, I loved some of her back catalogue ‘Big Black Cloud’ was a standout as well as ‘Spare Parts’ with Josh Cunningham was very well received; I want to catch this tour, I suggest you do as well.

Australia’s new breed of country music, Casey Barnes hit the stage sprinting and did not stop once during his hour set. Having last seen Casey over two years ago, I was amazed to see how much he has grown in fan and song base. Watching fans swell and draw to the front of the stage, singing each song word for word, must be thrilling. I loved that the song ‘God Took His Time on You’ was always destined to be a hit from the moment they laid down the track. This guy was always En route to the top of his craft, Sundays set reinforced the point. This guy is now clearly deserving of a headlining position at any festival.

Having last seen Brad Cox in a sweaty pub in Newcastle almost three years ago, I was interested in where this guy had grown regarding stage presence. Cox’s song writing has always been superior and remains on rotation in my playlist. On Sunday, we heard a louder and more dominant Cox taking control of the stage. Backed by a band of skilled musicians, they work synergistically to produce a fantastic sound. Songs like ‘Give Me Tonight’ and ‘Beau in the Back’ were sung back word for word by the crowd; I observed multiple smiles from Cox in appreciation. There was always a moment when Cox took time to reacquaint himself up close and personal with the audience; he was always a man of the people. It must be good to play a set to adoring fans and not even include two of your biggest hits. This guy is well worth looking at and following. If you have not picked up a copy of ‘My Minds Projection,’ do it now.

The boy from the bush returned to Shepparton for the first time in several years. Wherever Camp Kernaghan puts up its tent, lifelong fans will follow. Having been a part of country music history for years, Kernaghan was as professional and polished. A proud Australian, the set was full of well-known patriotic songs’ Sprit of the ANZAC’ ‘Australian Boy,’ ‘Dam Good Mates’ are stables to the Australian country fans’ diet. Kernaghan was humble and appreciative to the audience for their 30 years of support. It was great to see brothers Tom and Nick Wolfe (The Wolfe Brothers) and Brodie Rainbird taking on the role of the band’s beating heart. The Kernaghan show tours Australia constantly and never disappoints. Lee Kernahan has a new album out this Friday, the 15th, ‘Live at the Deni Ute Muster. It is also his birthday.

Overall, what a fabulous day. The organizers need to be acknowledged for their dedication and delivery, from the numerous varieties of food to the crowd and the artists. Let us hope this inaugural festival becomes a regular event for the Goulburn Valley; well done.