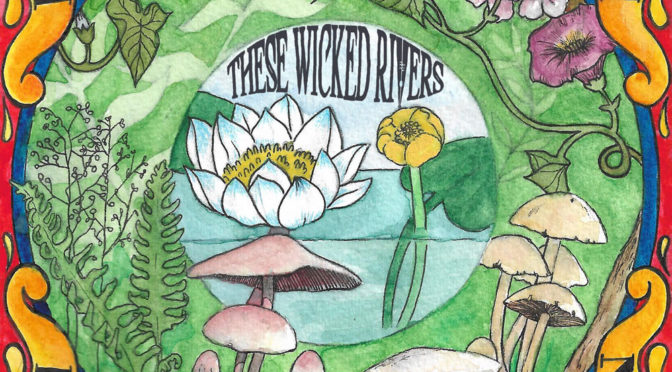 Formed in 2014, These Wicked Rivers are a four-piece rock band from Derby in the UK, and have previously released two EPs: The Enemy and II, alongside a double A-side single Shoulda Known Better, which gained the band a first wave of critical acclaim.

The debut album. Eden, was to be promoted with a big UK tour opening for the wonderful Ryder’s Creed through May, June and July, however that has had to be postponed for obvious reasons!

With a diverse set of stated influences, from the likes of Cream and Pink Floyd, through Clutch and Crobot and on to The Cadillac Three and Black Stone Cherry, the band’s drummer Dan Southall says “We feel we’ve made an album that encapsulates everything we have done before and shows what we want to be in the future”.  With production support from Jethro Chaplin (Bad Touch, Florence Black and Buffalo Summer on his CV), the band has delivered a modern rock album which embraces that classic British rock heritage, but adds their own original touches that set them slightly apart from the crowded UK rock scene.

The intro of Tea Leaves gives absolutely no clue as to what is to come, being a quirky slide-guitar ditty that shuffles along with a poetic vocal line and rolls into a piledriving wall of sound with the opening to Shine On, the opening single from the album.  There’s no denying the sound is laden with the blues-rock influences from Led Zep, Free and Trapeze in the big guitar riffs, and the pounding bass and drums under the melodies.  The chorus is a real crowd-pleasing anthem, with shades of Skin and Little Angels delivering a more contemporary sound than the real old-school rock.

The power of John Hartwell’s vocals is undeniable, and in Arran Day the band has certainly got a talented guitar-slinger who lets rip more than once through Shine and makes you keen to hear more!  The drums of Dan Southall provide the power for opening of Hit The Ground and then maintains the complex beats, accents and rhythms through the verse and chorus.

Floyd had been released before, and this is a monster of a track, with John’s voice ranging from menacing and gritty to soaring power harmonies, and the two guitars pile the pressure on each other through their united laying down of the riffs, and Arran provides another breathtaking solo – what a blinder of a track.  The guitars crank up again for Evergreen which is a more straight-ahead rocker, that had me reaching for my Massive CDs to compare notes between our very own Brad Marr and John’s vocals!  Rock solid backing to the track from Sam Williams on Bass and Dan Southall on Drums, absolutely smashing those accents, and another cracking solo.

The twin guitars open up Money in style, and John provides a low-register vocal drawl through the verses, and there is some more really tidy drumming under the main beat that keeps the track rumbling along.  An acoustic interlude at the start of This Train, and the voice again surprises with the contrasts and changes between low and high registers which are becoming a key feature of the These Wicked Rivers sound.  As the track builds up layer after layer, the power returns in the chorus and you can hear the BSC influences in the power of the drumming and the crunching guitars in the middle eight section before the acoustic kicks back in prior to the final full-bore chorus.

I love the energy as Count To Ten blasts to life – would be a brilliant set-opener!  Drums are right up front driving the vocals through to the chorus when the guitars go completely nuts, and Dan maintains the rage on the kit throughout.  The main riff is a real hook too, and Arran has the guitar wailing and moaning through the verse providing the perfect contrast to the complex riffs, and then delivers another short sharp treat as the solo.  Sam gets the opening glory on Ceasefire on the bass, and sets up the guitar riff perfectly, while keeping the rolling rhythm kicking along while John provides another vocal performance full of darkness and character.

This is clearly an album for lovers of sleazy blues rock guitars (Billy Duffy / Paul Kossoff / Ben Wells for example), with multiple complex slabs of riffing throughout, and clearly a great rapport between John and Arran in all of the dual-guitar segments, and The Garden is another excellent example, with a nod back to some classic 1970s rock In some of the guitar breaks, and more technical drumming from the really impressive Dan.

There is a contrast in pace and power within Won’t Be Broken but all the while through the restrained sections you can almost feel the band is about to launch into something huge, and they do!  The guitar starts to hum and then the whole band delivers a chorus that has the power of a stadium rock metal band, with the touch and feel of a classic blues rock band.  Not a filler to be seen so far, and we get another diverse track in the album closer, World In Chains which has an atmospheric opening with guitars reminiscent of Tony Iommi in those really early Black Sabbath classics.  The main guitar melody has an incessant repetitive power, and the vocals sneer their way to the howling of the chorus.

This album is yet another stunning example of the sheer quality and diversity of the current crop of NWOCR (New Wave of Classic Rock) bands that are delivering such impressive albums, and for this to be a debut release from one of the lesser known bands on the circuit is doubly impressive.

There is a bonus track available to physical product buyers in Don’t Pray For Me – so get out there an buy a copy.

Eden is out on 22nd May – Pre-orders: https://www.thesewickedrivers.com/category/eden-pre-order