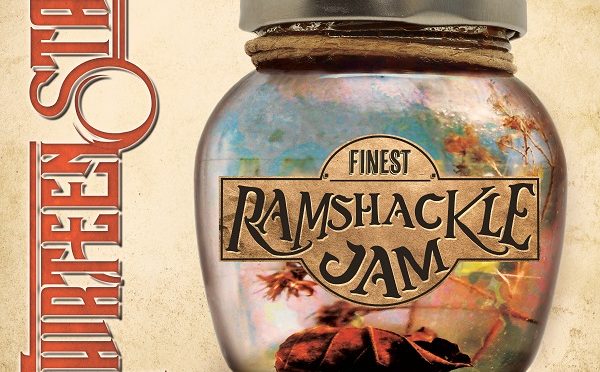 Thirteen Stars are a Southern Rock band with a bluesy/country swing all the way from the West Coast of Cumbria.  Finest Ramshackle Jam is an album that I have found really hard to categorise – not that I really want to pigeonhole any artist – from a band than spans the whole spectrum from bluegrass through country to soul, grunge and then flat out southern rock.  The common thread running across the whole thing is the rough gruff vocal delivery of main man Hoss Thompson who founded the band back in 2009, and in fact wrote, sang and played all the instruments on the 2010 debut release!

Several more releases and a line-up that was mainly settled in 2011 with Jax Sedgwick on Guitars and Andrew Bates on the Drums, and a couple of bass-players before Steve Revier arrived, and through to signing with Off Yer Rocka in 2014, and releasing The White Raven album in 2015 which brought the band to a greater National audience in the UK, and led to tours with bands from The Quireboys to Skinny Molly and Hayseed Dixie and a bunch of UK and European festival appearances, and a live EP, Cheek By Jowl, released in 2018.

There is a local Aussie connection which was to be a UK tour with our very own Black Aces through June 2020, however this has sadly had to be postponed to dates further away!

Album opener I’m Ready kicks off with a slice of hard rock guitar that has its roots in the 1970s classic rock world, and then just swaggers on through the track, crossing lines from Lynyrd Skynyrd to the Black Crowes with some wonderful guitar licks in the background, mixing with the keys

Another southern rock anthem in the making appears next in Running So Long, this is a song for the open road, top down, summer sun on the face, and those growly drawling vocals from Hoss that fit so well, and the lyrics refer back to the life and death of the great Tom Petty, written once the riff appeared, as it had a bit of the power-pop feel of the Heartbreakers in their prime.

Motown influences are right upfront in the joyous groove of Sweet Lies, and suddenly with the horns and the the ‘soul-sister’ backing vocals, Hoss’s voice makes perfect sense.  He reflects that the track was inspired by the time spent on the road with Spike and The Quireboys, and while you can hear the influences, this has much more of a southern country-rock feel that that gritty British rock sound.

The guitars lead us off into Give It Good and the funked-up beat driven by drummer Andrew Bates who has that Charlie Watts behind-the-beat touch going on, and this brings the excellent bass-playing of newest member Steve Revier to the fore.  Just when this reviewer thinks there is a consistent thread to the record, the grungy discordant riff of Sleeping, and the distorted vocals are more Pearl Jam and Stone Temple Pilots than southern boogie.  The guitar work from Jax is terrific and really pulls the track together.

A similar feel, but with a more psychedelic vibe is brought by Sorcery, with a sensational Led-Zep drum pattern and the guitars and keyboards meshing together to provide an absolutely compelling slab of high-quality groove-rock.

Another back-flip and we get Be There In The Morning which is the poppiest song on the record, with a wonderful hook of a guitar-line, and a feel of those punk-pop acts like Squeeze, Dave Edmunds or Elvis Costello in the delivery.   I’d Do Anything is more of that Thirteen Stars southern blues boogie, driven along by the drums again, with the riffs inspired by a combination of Kool & The Gang and the Red Hot Chili Peppers – and the latter is really highlighted in the beats that Andrew Bates lays down.  Some atmospheric backing vocals really provide some added melody and depth, and there is tasty little guitar solo at the end.

Back down South to somewhere East of The Grange, and the rip-snorting guitars kick off Mint Jelly (“They call him Mint Jelly, cos he was on the lam!”) which give a real ZZ Top feel to the powerful driving riff, the flashing lead breaks, and a bit of a Black Crowes strut in the vocals and the swaggering beat.  The song is then brought to a new level by the brass section pulled together by Johnny Vince, that goes so well with the honky-tonk piano.  Turn it up and bounce around the living room!

Back to Motor City and the soul of Rebel, which brings the same feel that Little Steven brings to Springsteen,  crossed with that later era Boomtown Rats sound, and features the horn section again to add that crucial extra dimension, and some really crisp snare sounds that accentuate the rolling rhythm  Great production and engineering here and throughout the record from Matt Ellis, and co-produced by Hoss!  Steel Horse is a Blackberry Smoke / Allman Brothers southern boogie tune about a steam train named Inferno that also has an Irish lilt to it that has hints of Thin Lizzy and Mama’s Boys to it.

The power returns with the riff of the album in Razor’s Edge, and an intro that has all those hallmarks of old-school Black Sabbath in the guitars, and ‘Anthem’ era Rush in the accents where bass and drums follow the riff, and breaks into a powerful dirty guitar line under the vocals, and the band gets the chance to let rip in the chorus.  Break It Down Slowly has the same power, but with a Stones / Crowes shuffle in the verse, and a wonderful shared chorus.  Hoss and Jax clearly have a bunch of fun trading guitar licks on this one, and it all suggests a certain amount of craziness live!

There is only one place on an album for a 7½ minute epic that opens up with a rainstorm and steel-string acoustic guitars and tubular bells / gongs in an intro that breaks into this unbelievably powerful and crushing riff which is just incessant through the whole of the track.  Only A Soldier has it all, with lyrics adapted from a American Civil War poem, and solos that you never want to end.  Drums and bass are unrelenting and those insane accents somewhere through the solo really lift the song to new heights.  The guitar duels that run through the last couple of minutes keep increasing the power of this monster until the subtle outro harking back to the opening.  What a closer – with the impact of the Outlaws Green Grass and High Tides or Blackfoot’s Highway Song, but as a real rock animal!