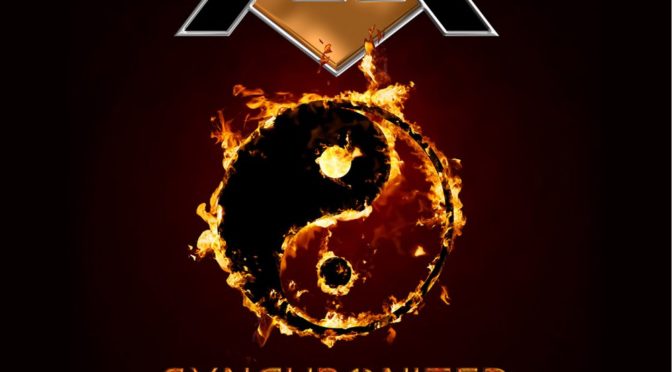 It is always a joy to get to hear a new FM album…….from the very first listen to that first FM record Indiscreet in 1986, having been a fan of Wildlife before then, and seeing them as the ultimate AOR support band over the next couple of years, including the epic Astoria show in 1987 with White Sister as the opening act.

The band has been through a few personnel changes, but less than many other 35-year old bands, and the current line-up has been constant for the last 12 years, and the albums released by this incarnation from Metropolis onwards have all been of the very highest quality.

The latest album opens up with a signature guitar and keyboard combination in the title track Synchronized, before it slides into a pop-rock vein, with a hint of those classic Robert Palmer songs, with Steve Overland’s honeyed tones clearly still on top form.  The backing vocals take a prominent place in the standout chorus, and Jem Davis provides a masterclass on the keyboards before Jim Kirkpatrick delivers a piercing solo.  Superstar ups the pace slightly and has a wonderful melody in the chorus harmonies, propped up by the rolling basslines of Merv Goldsworthy with hooks galore throughout, and some nice accents to boot.

Best of Times is one of those semi-ballads kicking off with some nice acoustic guitar, that FM seem to be able to deliver effortlessly, and we start to hear the incredible range of Steve O’s voice, which also hints at the soul / Motown roots buried deep, before Jim delivers a short and sweet solo.   A true ballad arrives in Ghost Of You & I, which sees Steve singing over a rolling piano melody, and opens up with some bright guitars and keyboard strings to give the song enormous depth.

The band turns up the funk with Broken, and Pete Jupp cranks up the beat on the kit behind Merv’s bass lines, and the harmonies are again right out of the top drawer.  There seems to have been an even greater focus on the backing vocals and multi-layer harmonies on this record, and they really add an extra layer of quality.  It can become a bit one-dimensional for the reviewer to keep focussing on the quality of Steve’s voice and the whole package of the backing vocals, but there is no escaping the fact that they are such an important feature of the FM sound.

As the band rolls into Change For The Better my impression is that this album has turned back time a bit to the Dead Man’s Shoes album from 1995, the last one before the band took their 12 year break!  Great catchy melodies, keyboards and guitars complementing each other through the melodies, a crisp tight rhythm section, and all those layers of harmonies, with Jim K providing clean, crisp solos.   Of course as I pen those words, End Of Days blasts through the speakers with a crunching riff and a throaty roar from Steve, which has all the hallmarks of those power rock anthems with an edge that the band delivered in the Tough It Out days.  The lyrics reflect on the issues of social disease, and the need for something to change, and there is a tasty dual solo between guitar and keyboards mid-song and again in the fade-out that makes one hope for an extended live version of this one.

There is that RnB funk sound to Pray which FM do so well, and the snare has been cranked up here, to provide the accents between some really tasty guitar licks and keyboard explosions, all the while seeing those immense harmonies through the chorus, and a middle-eight section to die for, before Jim provides another virtuoso solo.

Jem kicks off Walk Through The Fire with a real Strangeways feel as Steve provides the vocal tones before the band powers in, and ups the ante in the second verse, providing a huge wave of passion and emotion in the cries of “Let It Burn”.  Jim gets a bit more of a chance to let rip in the solo and tears some howls from the guitar in the process.   The tempo picks up for Hell Or High Water, with the keys providing a bit of volume to the guitar riffs, and a real feel-good vibe to the chorus, which is maintained under another slice of guitar excellence from Jim K, before a slick tempo change to break up the song ahead of the final chorus and the outro.

Jim K is known as a great blues guitarist, and Angels Cried opens with some searing slide guitar before the piano and vocals take over the opening verse in what swiftly becomes an absolute stand-out track on the album, nearly 6½ minutes of power and passion, with all of the breathtaking brilliance of the classic FM ballads of old, which often have a tinge of gospel in the raw emotion of the vocals.  Steve O absolutely nails the vocals here, and the guitars get a good opportunity to shine through the solo and outro again.  This will become one of the all-time classic FM songs for sure.

It is good to hear the band experiment a little, and the final track Ready For Me has an oddball intro which leads into a classic FM rocker which is the perfect way to close the album.

I have really enjoyed the recent FM albums of Rockville, Heroes & Villains and Atomic Generation, and maybe there are not the tracks here which provide that immediate impact, with the exception of Angels Cried, however I think this may go down as the most ‘honest’ FM album of the last 10 years, providing all the elements that have made FM what they are today – undeniably the best British melodic rock band never to become global megastars.

The Melodic Rock family in Australia got very excited at the prospect of seeing them live Down Under this year, and through no fault of the band, sadly this did not happen as hoped – maybe 2021 will bring a change of fortunes here.