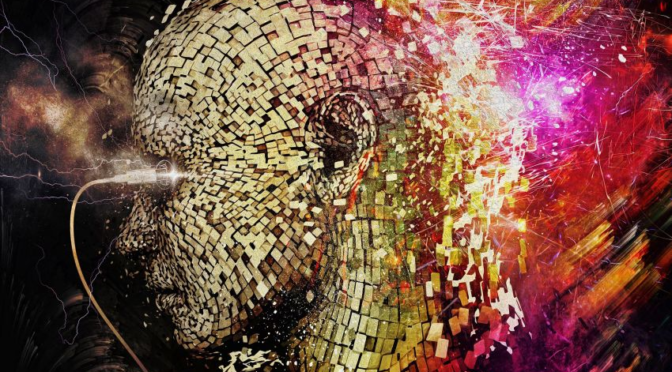 The planned UK Tour dates were all canned due to COVID19, and there is also a plan to bring the band Down Under when travel resumes – and because of some musical similarities to Aussie bands like Karnivool, DLC and Cog, there is plenty of potential for a warm welcome here for the band when they do make it.

A piano and soft vocal introduction to the title-track opener The Art of Disconnect is a definite bum-steer into what follows – multi-layers of heavy guitar riffs, in-your-face harmony vocals, and some industrial staccato rhythms all bound together with some massive waves of keyboards.   The crushing riff of Enthusiasm and Fumes leads into some awesome vocal harmonies, and was the first single off the album, all about frontman Nikki Smash’s ongoing battle with insomnia, and sees him delivering a virtuoso performance on the guitar, as well as vocally – hints of one of my fave UK three-piece bands, the sadly defunct heavy-grunge rockers The Zico Chain, as well as that Karnivool-esque melodic metal guitar sound.

There is a catchy off-beat groove from the bass and drums to the next up It Comes At A Price, with a wicked hook to the chorus and some frenetic discordant riffs over the driving bass-line from Joe Constable.  There are contrasts in the vocal sounds which add to the variety without detracting from the quality of the structure and delivery of the song.  New single The Grip opens up with a modern-day version of the seventies glam-punk anthems delivered by the likes of Suzi Q and The Sweet mixed up with the more modern My Chemical Romance and The Alkaline Trio.  This has another bouncy beat from Benji Knopfler on the drums, and you can visualise Nikki S smashing the riffs out on guitar as he shouts out the vocals like Dexter or Billie-Joe.

The pace rips up with The Clear Light of Self-Hatred with clear pop-punk roots now visible in particular in the crowd-chorus vocals.  The stripped back verse is really effective in elevating the impact of the full-bore chorus, and then there is that utterly insane riff that separates the track under that eternal scream.  The mosh-pit will absolutely erupt at that point, and again when the riff closes out the track.  A bit of gentle relief in the lighter Grin And Bare It with an equally immense layered sound to the chorus, but a much starker verse with guitar, piano and a powerful but pleading quality to the voice.

A grungier and darker melodic feel to Who I’ve Become features another contrast between the verse, with the delicate technical drum line, and open guitars, to the chorus with a deep dark riff and more of the well-thought out discordant harmony vocals that are something of a trademark.  Habit Machine has a similar feel, but with a more ambitious structure, and the band have delivered an immense track here – with strings and piano providing elements of Pink Floyd and Jimmy Eat World……

The deliberate and heavy riff and vocals of Slow Motion Ruin may provide one of my two favourite tracks on the album, with the clashing guitar-lines of the heavy underlying riff and the shrieking guitar over-lay, with a really powerful vocal from Nikki S that adds more weight to the already heavy sound.   Blueprint for a Breakdown is the other favourite – and the two tracks sit well together on the record.  The bass and drums are the foundation for this one, and there are some effective whispered background vocals which add a straight-jacket feel to the track.

A flick back to the pop-punk feel for If I Could Trade Me For A Day is a less than 2-minute slice of teenage angst, before Straight Jacket which is a much more complex beats – still only 3 minutes but with multiple time-signatures, layers of vocals and guitars, and a huge chorus, before those techno-metal guitar chords in the mid-section which are the other common thread through the album.

Stubborn is almost the perfect way to close the album, with echoes of the intro to the title track, and elements of the band extracted into a dream-like atmosphere that weaves a complex set of melodies over a slow-burning basic track, and allows the band to experiment with some unusual sounds to deliver an impressive close to a high-quality record.

This review has probably not done the album justice – it should appeal to a wide range of pop-punk, classic rock, techno-metal, prog-rock and grunge fans in equal measure – and features a solid production with the mixing by Chris Sheldon (Foo Fighters and Biffy Clyro), and some songwriting help from Georgia Train (singer of Bitter Ruin, and songwriter for The Kaiser Chiefs).

This album reveals itself slowly over many many listens, and will continue to do so the more I hear it!