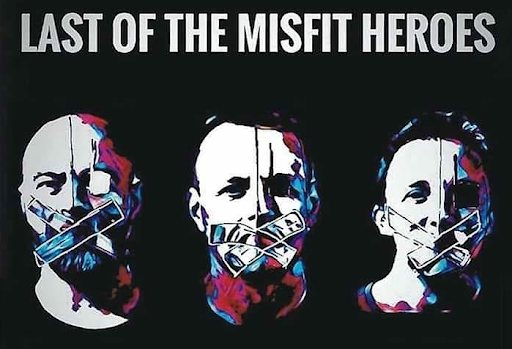 LAST OF THE MISFIT HEROES
HOPE FOR THE HOPELESS

Founded back in the pre-COVID era in South London, Last Of The Misfit Heroes are a three-piece alt-rock / rock / punk band with a bit of swagger and a whole heap of attitude.

They released a 4-track EP in April 2020, and through the whole pandemic era have worked on this full-length record, Hope For The Hopeless, which includes the four tracks from the EP and 6 new songs – in much the same vein.

Front man Steve Catt has a rough and caustic vocal delivery which is where the punk attitude comes from I think – this is Joe Strummer / Bob Geldof / Phil Lewis grit and tone, and it sits well over the edgy rock guitars and the solid backing of bass and drums of these 3-minute blasts of melodic aggression.

“It’s alive….. it’s alive….. it’s alive…..” in a hysterical Hammer Horror voiceover leads into Creating A Monster which powers along in solid power-trio form – I was a massive fan of the dirty noise of Zico Chain and early Royal Blood because of the punkier attitude from my misspent youth following the Clash, Pistols, Motorhead and Ramones.

Misfit Misplaced has more of the same but grungier and heavier, opening up with a menacing bass-line, and some distorted guitars and vocals, before Steve Catt piles in with the buzzsaw riff, and brother Chris Catt destroys the drum kit with power and finesse combined, while Anj Jackman holds it all together on the bass.

Another gritty riff, and an out-there bass line kicks off Pieces which has a really wicked off-beat groove in the verses, and a lower-register vocal delivery which fits perfectly – and the intricate guitars of the mid-section are terrific. This is like the Stranglers in their heyday – or the Killers with some real edge to it!  The band uses a number of vocal outtakes as a mechanism to link tracks through the album which I don’t mind, and Dead Behind The Eyes offers another dark, moody number, with a punchy guitar riff (think the Runaways – Cherry Bomb, but dirtier), and a nice harmony in the chorus.

Pulling Punches gives us more of the same – with the heavy grungy bass really at the forefront, and a great middle-eight with edgy riff and crowd-chorus of “Oi!” before rolling out with a hypnotic guitar line and backing vocals leads to the crisp sharp ending.  There is another terrific riff and melodic lead-break that gives us the start of Demons, and a powerhouse verse before the start-stop segment through the chorus that shows how tight this unit it.

Some more creepy sound effects lead into the epic QOTSA-style riffing of When My Empire Falls, with staccato snare-drum, layered rough guitars, and a powerful vocal delivery from Steve C before a wild solo takes us to the sudden stop.  Bombs powers along with some tight beats and time-changes that see the bass and drums operating on a different planet to the guitars, but in perfect sync!  As The Water Runs is a bit too messy for my liking – using a really difficult tempo, and a lower vocal register that might just be outside Steve’s normal range, and all in all it doesn’t quite work for me.

The album ends with Wake Up Call, which has all the hallmarks of the rest of the album – really tight and together as a band, pace and power, punchy grungy guitar riffs, sledgehammer drumming and an excellent voice that has the right blend of vitriol and melody.  Aussie readers can relate to the likes of Gyroscope, The Hot Lies and Grinspoon if you need a reference for the LOTMH sound!

Production is pretty tidy from Dan Lucas, allowing the grungy edge to show through, and maintain the sharp, crisp bass and drums that underpins each of the tracks, and maintains a full and powerful sound throughout – I suspect it sounds better the louder it is!

You can buy the whole album from the Bandcamp link below for less than A$2 so it is hard to go wrong if you want to dive in and grab the album.