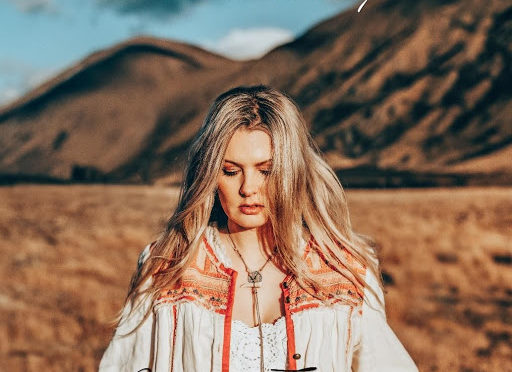 Following the success of singles Cowboy Lullaby and the super-catchy Country Boy across Australia and USA, Christchurch’s Miranda Easten is releasing her long awaited debut album Behind Unbroken Strings. The collection proves that she is a master of twang and a face of modern country music.

There is nothing alt-country, or country rock crossover about this record – Miranda is unashamedly and consistently in the traditional mould of pure country music.

Her voice is strong, clear and subtly twanging with a US lilt that matches the lyrical content of a number of the tracks, which feature cowboys, trucks, freeways and tractors among other ‘standard’ country music content.

Country Boy kicks off the album in style, and is an energetic and romantic love song about the excitement of a relationship in its early stages, including falling in love, and learning new things about each other.  It has a pure vocal line, with a melody that nods to Lionel Richie’s Say You Say Me, and shows off the quality team that Miranda has put together to record the album, in Greg Haver as Producer and drummer, along with Auckland based musicians Tom Healy, Cass Basil, Stephen Small and Mark Hughes.

There is a reflective and slightly plaintiff feel to some of the tracks, with House Bus Steve providing a powerful emotional vibe, and the first single Cowboy Lullaby being a stripped back acoustic guitar number, with a stronger drawl in the vocals that really places Miranda firmly in the Miranda Lambert, Kacey Musgraves tent, rather than the previously mentioned crossover camps, like Taylor Swift or Shania Twain.  There is no criticism here, this is pure and crystal-clear country, like the air around the Christchurch area in NZ.

The band gets some more exposure in The Travellers, with some intricate slide guitar work and rolling piano lines under the melody, and then the drums add a bit of power to the more upbeat In Love Again which in my view is perhaps the most commercially accessible track on the album, and features some more excellent guitar work.

This Old House takes us back to the Virginia hills in a lilting ballad, while Only One shows off a different dimension to Miranda’s voice, with a lower-register and slightly husky delivery in the verse before the chorus sees her deliver some real emotion in the clear pure harmonies.  There is a retro Motown pop feel to You that is both uplifting, yet retaining that thoughtful reflection in the tone that keeps this rooted in the country genre.  With no wish to detract from Miranda’s talent, the album has been given some real polish from the guys in the band, and Greg Haver on the drums is a standout (as a drummer myself).

The closer is the title track, and a delicate piano melody and haunting vocal opens up Behind Unbroken Strings which delivers a powerful emotional punch in three minutes of heart-wrenching vocals over the mournful lament of the piano.

There is a cover of REM’s Country Feedback on some versions of the album, but not on my review copy, so that will remain a surprise to any listener!  Other commentators have called it “an inspired highlight” of the record.