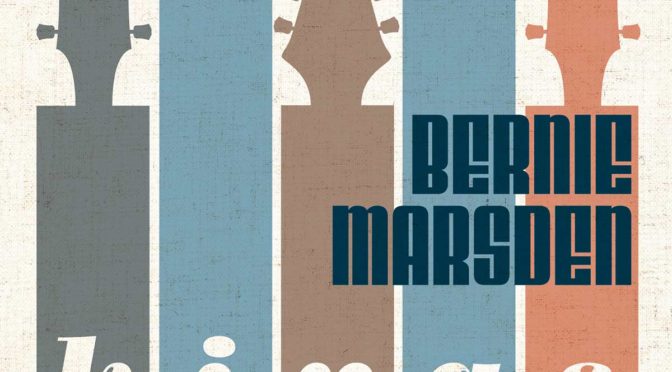 Guitar legend Bernie Marsden will be releasing his brand-new album Kings through Conquest Music, on 23rd July, 2021 – his first solo album in 7 years, and it’s sure to delight his fans and lovers of blues, rock and more besides.  This is the first of a planned series of albums in the “Inspirations” series, conjured up by Bernie in conversation with Billy Gibbons.

The inspiration came from the summer of 2018 when Bernie was invited to join Billy on stage with The Supersonic Blues Machine.  After the soundcheck, Billy played Bernie an album by American blues singer and harmonica player Kim Wilson, and posed a question “Bernie,” Billy asked, “wouldn’t it be great if we could all record the songs we grew up with as we learned to play the guitar?” His imagination fired, Bernie set about compiling a list, and the “Inspirations” series was born.

This is a stunning album that’s going to wow blues lovers in particular. It features 10 classic blues songs, originally recorded by the legendary Albert, B.B. & Freddie King, with a real focus on the latter.  These, Bernie has recorded in a studio in Oxfordshire, aided and abetted by a talented band in John Gordon (Bass), Jim Russell (Drums) and Bob Haddrell (Keys) that just locked into a natural groove, and the record is packed with high calibre blues and soul.

I first saw Bernie play with Whitesnake at the Lyceum in London in 1978, in the true blues-rock incarnation on the band, and his combination of pure blues guitar with Micky Moody’s more slide-influenced sound was the bedrock for those early Whitesnake years.  I always been a fan of the solo work, and the two Alaska albums, but this is the first complete blues record that I have heard him do.

Kings is a collection of classic tracks delivered with a pure and unadulterated joy at the simplicity and quality of the songs, a laconic masterclass of blues guitar work, and the clear and easy vocal delivery, which is obvious from the very start in Don’t Lie To Me, an upbeat skiffle workout that highlights the clear guitar tones that Bernie is renowned for.  Key To The Highway opens up with a dirty blues riff and a typical Bernie lead break, before rolling into the gorgeous body of the track, that allows free reign to the lead guitar, and becomes more solo than song!

Songwriting legend Leon Russell’s Help Me Through The Day brings back memories of the Lovehunter album, which featured this cover, and Bernie makes the vocal his own, while the band lay down a casual late-night groove, and then we get a languorous warm solo that ties in perfectly with the feel of the track.   There is a bit more kick in I’ll Play The Blues For You, and a heartfelt voice, which seems to just get better and better, over the mellow guitars.  Some great Hammond Organ work lifts up the intensity mid song, while Bernie takes a bit of a back-seat, applying some quality touches where needed.

A drop in tempo to a classic blues ballad in Woman Across The River which pushes Bernie’s voice a little until he really opens it up, and features one of those classic blues shuffle timechanges, and then rips into a sizzling little solo over the honky-tonk piano melody.  Help The Poor written by Charles Singleton, and made famous by BB King and then again by BB and Eric Clapton – so no real competition!  Bernie makes this one his own with a low-key vocal and wonderful guitar work throughout.  One thing strikes me from the record, is just how much is crammed in to each of the tracks, many of which under 3½  minutes as they were written.

Me And My Guitar could be the Bernie Marsden anthem – a joyous rendition of this Freddie King version written by Leon Russell with his drummer Chuck Blackwell, who also played with Freddie K.  This just belts along with a great underlying riff and some searing guitar licks over the top – I reckon this is the track of the record. Another Leon Russell penned Freddie K track is up next in Living On The Highway, also recorded by John Mayall and Dr Feelgood, and Bernie pays this one due homage, and again the piano and guitar interplay is excellent.

A classic belter of a blues ballad in Freddie K’s own You’ve Got To Love Her With A Feeling allows Bernie to absolutely rip out solo after solo, before the Don Nix track Same Old Blues which is one of those heart-wrenching, string-bending blues standards.

Bernie then provides two of his own instrumental tracks in Runaway, a gleeful romp through a three-chord standard, with the melody delivered in true lead-break style, and a switch or two in rhythm that keep pushing the tempo, while the licks and solos keep coming.  This is a blues guitar masterclass in 2m 50s.  Uptown Train smoulders into view with organ and sleazy blues guitars, and which is the perfect close to the album.

If you had no idea who this was, and heard the record playing in a café or bar, or record store, the music would just flow around and through you as befits the set of classics it is, and fingers and toes would start tapping.  For the blues aficionados, they would know the songs and the provenance, and many would then be stuck trying to work out who was playing!  Bernie Marsden has provided a fitting set of tributes to some of the great blues songwriters and the 3 Kings as titled!