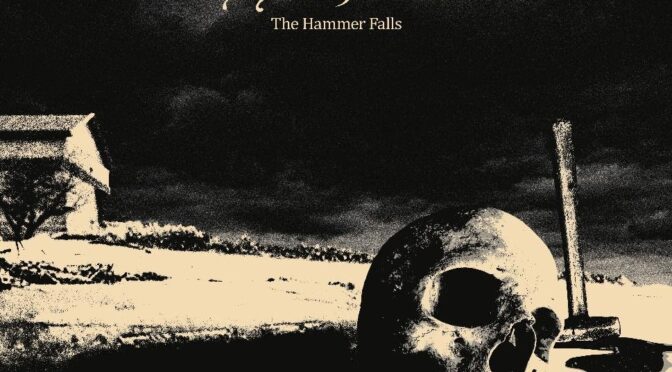 London-based guitarist / vocalist Jack J Hutchinson has been one of the busiest musicians out there during the COVID-19 pandemic, doing live streams, special edition recordings, cover versions (including an epic version of War Pigs) and released his last studio album – Who Feeds The Wolf – in Oct 2019, along with a “Live” album Who Feeds The Lockdown in 2020.

The Hammer Falls has been in the works for over 12 months, with World On Fire having been released in Nov 2020 as a teaser for the record.  The band is basically a classic rock power trio in the vein of Budgie, Triumph, The James Gang and Cream, with a loud and raunchy guitar sound, and the powerful gravelly vocals both provided by the main man.

The album opens up with a riff-heavy monster in Straight To Hell that ranges from the solid core riff under the verse to a melodic soulful chorus, and an epic opening solo that brings classic Iommi to mind.  The solo melds into another mellow section that has a slight touch of Muse, before heading back into the chorus and a closing rendition of the main riff!  The title track has another corker of an opening riff, and some dual guitar harmonies to lead into the verse, which are repeated in the chorus.

The Hammer Falls is an appropriate title as the band delivers a powerful accompaniment to the crushing guitars.  It is clear from the album that Jack’s long-time bandmates in Lazarus Michaelides on Bass, and Felipe Amorim on Drums, are a well-oiled machine who provide an utterly solid backing to every track.  A three-piece needs the solidity more than flash playing, and these guys deliver in spades.  The vocals feature some cool touches, and harmonies in the chorus, and while Jack will not claim to be the greatest vocalist, he has a good line on melodies and on making the best use of his slightly gravelly tones.

It is clear that Jack has worked on creating some serious riffs in lockdown, and he pulls another one out with Down To The River, with a more deliberate tempo, with some pounding toms providing heavy accents, and then kicking into a more upbeat verse with some crisp off-beat drumming.  The arrangement of the backing vocal harmonies is excellent, and mid-track we get a diversion into a superb guitar-driven segment with some wicked harmonies and accents being thrown into the riffing.  On close inspection there might be 7 or 8 distinct elements to this track, and Jack weaves them together and ensures there is a pretty seamless connection that ensures continuity through the track.  You just need to listen to the track several times to get to grips with it all!

Delicate acoustic guitars provide an atmospheric intro to Angel of Death, a bluesy rock ballad that has a real retro vibe to it, with the drums and ethereal harmonies from guitars or keyboards, and a restrained solo of soaring power.  There is a building sense of power and emotion as the track progresses, and the discordant melody that sits behind the impassioned cry of “On Your Knees” that closes the track is just brilliant.

The lead and bass guitars track each other through the main riff that open up Halo, driven by some cracking drumming from Felipe, and the choral harmonies add multiple layers to the sound.  Jack delivers another slightly off-beat solo, and the overall feel of the track has a bit of Foo Fighters in it, which is a mighty compliment.  Call of The Wild sees Laz rip some insane sounds from the bass guitar in the intro, before the track settles into a steadier beat for the verse and chorus, keeping the early Rush-like accents for the end of each chorus to break up the straight-ahead tempo of the track as a whole.  A screech of feedback leads us into the guitar licks, harmonies and lead breaks that roll over the intricate beats from the band.

There is a definite familiar feel to Gunslinger – which has all the hallmarks of a JJH track, with the vocal line melodies being not far away from earlier songs, although the middle-eight refrain adds a new dimension before Jack kicks off another solo.  A deliberate chunky riff with an unusual growling vocal intro opens up The Ravens Crow before the more typical verse takes us through with a strong and clean vocal, and into the sonic maelstrom of the chorus.  Then an old-school classic metal section appears with some riffs, harmonics and lead breaks that could be a whole new track on their own – which morphs seamlessly back into the chorus.

What Doesn’t Kill You (Only Makes You Stronger) has that contrast between the rougher vocals of the verse, and an almost Beatles-like feel to the chorus with much cleaner voice and harmonies.  There is a wonderful time-change that leads into the guitar-driven mid-section, with layers of voice and guitars weaving a tapestry of slightly psychedelic rock.  There is so much going on through this track that you almost get lost.  Just on 4 minutes the band explodes into an up-tempo segment over which Jack absolutely shreds his way into what becomes the classiest solo on the record. Somehow we find our way back to the main chorus again, before a ragged ending that is just right.

The album closes with the excellent World On Fire, which could only be a JJH track.  Great solid riffs, throaty vocals, a catchy hook to the chorus, sharp soloing and more different riffs to bridge between segments.  There is a total contrast in the mid-section which sees a rolling bass line sit behind the rambling guitar work, before a deep breath and back into that crushing riff for a couple of closing choruses and the very clear full stop of the end.

This is an album that has kept on giving for the full two days that I have been playing it so far.  There is no doubt that Jack has now settled on what is the definitive guitar and vocal sound that works best for him, and the song structures allow he and the band to really express themselves, while staying true to that three-piece ethos.  This should also be just the same onstage, as there does not appear to be any overuse of multiple guitar tracks to beef up the sound – Jack has a really gritty earthy guitar tone anyway which fills a lot of the potential space!

Going on to enthuse about his latest collection of songs – ”We’ve thrown everything but the kitchen sink at this record. It’s a step up from my previous albums both in terms of songwriting but also production. We tracked most of the songs live in a room together, which was really important to the ethos of the sound.”

“It’s my most personal record to date, but it touches on wider themes such as mortality and loss which affect us all.” muses Jack reflecting upon a period of time which was challenging for all walks of life, “It’s hard hitting, rammed with heavy riffs and guitar solos, but with lyrics and melodies that will hopefully touch and move people. It’s a banger, the songs are fun to play and have gone down very well on tour!”

Jack will be taking the band out on the road in Feb / Mar 2022 to officially launch this beast of a record, and melt a few hundred ears in the process, with the first night at the O2 in Islington which should be a belter.

TICKETS FOR ALL OTHER DATES ON SALE NOW FROM www.JACKJHUTCHINSONMUSIC.COM

Call of the Wild : https://youtu.be/rIfYx5tFizA