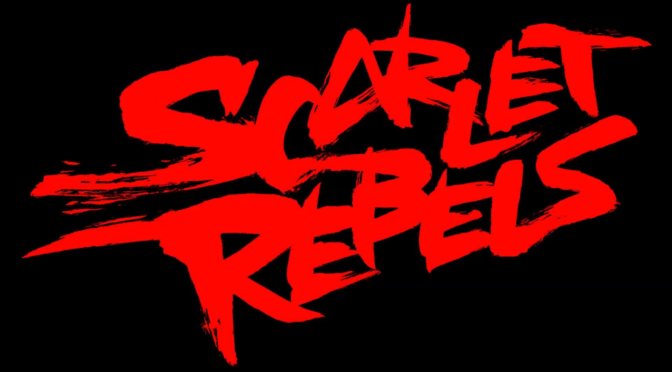 I have been fortunate enough to get access to a whole host of albums in the past 18 months from the vibrant and booming rock scene in the UK in particular – whether NWOCR or otherwise, and as we roll into 2022, one of the first of the New Year releases has hit my in-box thanks to PK at TMR PR and Media.

Like all the great bands, Scarlet Rebels have a deep connection to where they come from. A fiercely working-class town on the South Wales coast, Llanelli’s DNA is embedded deep within the band.

Wayne Doyle, the frontman and band lyricist, was watching TV in the middle of the pandemic when he found his anger rising. Some faceless British politician – he can’t remember which one, mainly because they mostly look the same – was shamelessly taking credit for footballer Marcus Rashford’s successful campaign to reinstate free school meals for children during those difficult times.

This state of affairs inspired the title track of the Llanelli five-piece’s stellar new album, See Through Blue.  Over a steadily intensifying musical backdrop that evokes such musical icons as Bruce Springsteen and latter-day Johnny Cash, Wayne crucifies a ruling elite guilty of “gaslighting a whole goddamn nation to push your contracts through.”  The striking album cover illustrates the point – it features Prime Minister Boris Johnson standing at a podium, casting a demonic shadow.

All the rage and fear and uncertainty of recent times has been poured into the album’s 11 tracks, resulting the rarest of rock’n’roll albums: one with a sense of purpose.  But where the title song See Through Blue and anthemic first single Storm – which questions whether people are prepared for the aftershocks of both the pandemic and the government’s high-level malfeasance – are both fuelled by a righteous sense of injustice, other bolder, emotions also shine through.

There is a cracker of an opening riff that kicks off the show with I’m Alive, twin guitars roaring, bass and drums powering the beat along, and an immediate impact from the lead vocals – all of which combines to deliver a positive first impression.  No this is not a hugely original or unique sound, but a great album-opener that sets the scene.    As soon as Storm kicks off the goosebumps start to appear, as this brings the sound right up to date with more of a nu-metal feel that reminds of other solid Welsh rock bands like Funeral For A Friend, Lost Prophets and The Blackout, with a super-catchy chorus.

This sound persists into the epic London Story, with the melodic hook of the guitar-break, the soaring harmonies of the chorus, the staccato verses, and the tight and expert soloing of Josh Townsend.

These Days was a single release that received wide acclaim, and has a strong commercial feel, while also a ferocious commentary on the inequalities faced by so many as a result of COVID-19, while looking forward to a brighter future as the world emerged from the pandemic (here’s hoping).  This is a stand-out track, not a full-on classic rock monster, but a mature and polished track full of subtlety and melody, and shows just what a great voice and tone Wayne possesses.

The energy and excitement steams back in with Take Me Home, which starts off at 100mph and almost never takes the foot off the gas.  The rhythm section of Wayne Pablo Esmonde on Bass and Gary Doyle on Drums is superb here, and while there is a slight interlude mid-track, the energy never lets up, and you just know that it will all kick off again soon, with a blistering solo from Chris Jones before the band delivers a final chorus and then a driving outro of the riff to the close.

Another switch from all-out rocker to a more atmospheric slow-burner in I Can Sleep Now which sees much more evidence of the keyboards from Josh, as well as another crisp and vibrant solo from Chris.  This has some real emotion and intensity in the verses, and lets the power out through the chorus in an effective way.   Solid riffs and a tattoo of sharp drums leads us into the anthemic I Can’t Say, which may be my favourite on the record.  This has got a great melody, some complex guitar breaks over the ultra-solid core riff, and another catchy chorus.  A great solo featuring a wah pedal and then back onto the core riff, again with some more overlaid guitars, and another chorus to close.  Love It!

Take It opens up with a combination of guitar riffs, and a crisp drum pattern that holds the entire track together, and a surprising chorus that has a catchy melody, before a cracker of a solo from Chris.  We then get a real change of mood in the piano-driven ballad Leave A Light On which is a slow-burner of a track.  It is miles away from the rest of the album in many ways, but there is a real quality in the lyrics, and the simple melody just motors along behind the vocals which are delivered with such clarity and passion – with a stand-out being the interplay between Chris and Wayne in the solo section towards the close.

We are back in the classic blues-rock vein with We’re Going Nowhere, which has an absolute anthem of a chorus and an epic mid-section that leads into another terrific solo.  The main riff is a belter, full of groove like Thunder or the Electric Boys at their best.  Fast forward a few years and we are back in that classic Welsh-sound with Everything Changed, full of intensity, powered along by some excellent drumming and a pulsating bassline.

The title-track See Through Blue closes the record, opening with a dark and melancholy vocal line over a minor-key acoustic guitar melody which covers the first two verses.  Josh takes the lead on the guitar as well as the keys, and the song roars into life halfway through when the acoustic guitars are replaced by a raucous pair of riffs and some sensational guitar work from both Josh and Chris that both clashes and harmonises to great effect.

The band’s name was inspired by the band’s local rugby team, the Llanelli Scarlets. “Growing up where we did, you either play rugby or form a band, and I was never big enough to play rugby,” laughs Wayne. “But we wanted to have that link to where we’re from. Plus, it’s a rock’n’roll colour, red.”