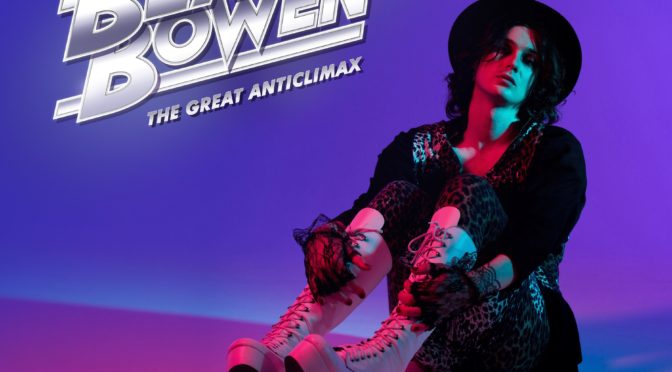 A support tour with Uli John Roth (Scorpions) around the UK exposed him to a wider classic rock audience of guitar-lovers, and marked him as a talent to watch.

Roll on 18 months of relative obscurity and Kaleb has re-emerged, morphed into Beau Bowen, who appears to be an exaggerated persona that has taken some of the extremes of glam, progressive and psychedelic rock and melded them into a modern-day Marc Bolan figure – and embraced this totally in his music, image and performance style.

A single was released late in 2019, A Rock’n’Roll Story which opens up with a plaintiff Bowie-like lament, with complex guitar melodies, and then ramps up to a glam-rock screamer with some distorted riffing with some Iommi-like guitars and wild synthesiser overlays, before reverting to the original sound of the delicate Latino guitars, and those almost frail vocals that Beau is able to switch on and off at will.

Next month the full-length album, The Great AntiClimax is released, and this has the potential to catapult Beau to a level that was suggested by the critics in the earlier days of Kaleb McKane.   The title track again opens with an acoustic guitar and vocal piece which highlights Beau’s impressive vocal range, before an irresistible riff crunches in from the band, briefly, and we then get a solo over the piano and guitar lines, before the riffing re-starts with an anthemic pomp feel, and a huge set of melodies and harmonies behind the voice – think Yes, Queen, Pink Floyd and Kansas at their peak progressive rock days, with some equal-parts quirky and just plan nuts synth lines running riot.

Time is an Illusion brings a phenomenal Brian May-ish guitar solo over another pomp-tastic orchestral backing, and leads into possible the riff of the record which I just want to go on and on, with maybe the sense of classic T-Rex with the guitars screaming over the top of the riff and then abruptly finishes!

The centrepiece of the album is the triptych of Cosmic Renaissance I / Messianic Indulgence / Cosmic Renaissance II which to be honest sounds like you might imagine – partly messy, partly inspired, a  mix of prog-rock chaos, and in the middle element, some wonderful harmonic vocals over a deep warm piano melody – I can only imagine what this will sound like live – I suspect with the right mix and volume it will be jaw-droppingly immense!

The Life I Chose for Myself opens with Beau’s haunting echoing voice over the guitar / piano melody, and then builds up to the full band in a pulsating mix of thrashing guitars and keyboards, and the multi-layers vocals that some studio-wizardry has enabled.  Beau’s guitar solo over the crescendo of the back-beat provides a wonderful contrast between the clarity of the lead guitar and the underlying music from the band.

The grand song cycle of Universe in Reverse is full of harmonic, melodic hooks and the track for me really starts at 1m 42s in when the guitar, bass and drums kick in with another 1970’s pomp monster, and a searing solo over the band, that brings the Muse-comparison to the fore.  The final track is Bisolar Disorder which opens up with something Prince might have created with Freddie Mercury if they ever worked together.  The final minute of the track is just an explosion of blistering fretwork over a driving, pulsating background, and dissolves into a feedback-filled climax that suggests the guitar being leaned into the speakers as the crows erupts, and the band takes their bow!

To the listener, used to more standard rock, blues and metal bands in recent years, there is the occasional feeling that too many different genres and elements are thrust together into each song, and in fact the gaps between tracks are so small on my version that occasionally it was impossible to tell where one finished and the next started – but taken as a whole this is a brave and slightly experimental record, harking back to a simpler, wilder and less constrained musical era, when absolutely anything goes, and nothing is out of bounds – and that in itself is refreshing!

In the recent photos and videos, Beau Bowen certainly looks the part. From the hair to the white platform boots, leopard-print, lace and glitter, he’s every inch the rock star – and the album title itself suggests there is a sense of humour and the absurd tucked into the bravado of the persona.

Take a chance on this one, close your eyes, turn up the stereo, and prepare to take a step back to 1973 at its most extravagant and unconstrained!