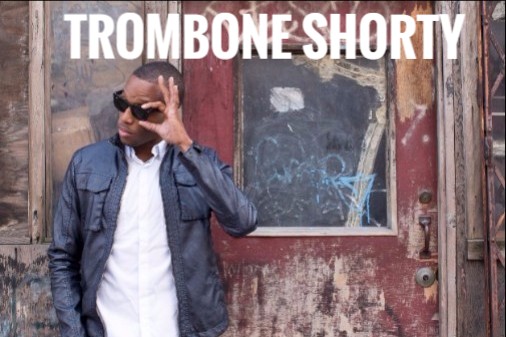 Bluesfest favourite Trombone Shorty is bringing his energetic fusion of funk/rock/jazz/hip-hop to back to Australia. The New Orleans native began his career as a bandleader at the young age of six, toured internationally at age 12, and spent his teens playing with various brass bands throughout New Orleans and touring worldwide with Lenny Kravitz.

He now fronts the band Trombone Shorty & Orleans Avenue, together they have toured across the U.S., Europe, Australia, Russia, Japan and Brazil. In 2010, Trombone Shorty released his debut album, the Grammy-nominated Backatown, followed by For True in 2011, which topped Billboard magazine’s Contemporary Jazz Chart for 12 weeks!

His newest album, Say That to Say This, was released in 2013 and features funk/jazz elements of New Orleans. Trombone Shorty appeared in several episodes of HBO’s Treme, and has recently appeared on “The Tonight Show with Jay Leno, Jimmy Kimmel Live,” “Late Night with Jimmy Fallon” and “Conan.”

In 2012, he performed at the White House in honor of Black History Month with music royalty such as B.B. King, Mick Jagger, Jeff Beck and Booker T. Jones. At the 2014 Grammy Awards, he performed alongside Madonna, Macklemore & Ryan Lewis, and Mary Lambert. In 2012, he received the President’s Medal from Tulane University in recognition of his charitable work with the Trombone Shorty Foundation, which donates quality instruments to schools across New Orleans.

Their performances are high energy, soulful and totally full of joy, don’t miss them when they hit Sydney and Melbourne in April 2017.