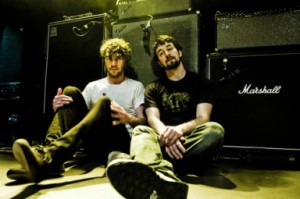 Don’t you just love a band who keeps their promises? When powerhouse Vancouver duo Japandroids were snapping necks at Laneway Festival during their inaugural Australian visit earlier this year, they continually preached from stage how much they loved being here and vowed that they would come back soon for some more intimate performances. Well guess what? They’re coming back this August and September!

It’s been a rollercoaster ride for the Canuck duo, Brian King (guitar, vocals) and David Prowse (drums, vocals). The friends from university formed Japandroids back in 2006, and – influenced heavily by The Sonics – quickly began writing and recording their own music, and in the spirit of true DIY putting on their own gigs around Vancouver. After a couple of years and a couple of EPs they recorded their debut long-player, Post-Nothing, but soon became disillusioned with life in the band, and resolved to break up once they self-released the record in early-2009.

That could have easily been the end of the road for the talented twosome, but fate soon intervened and put paid to that eventuality. Once the album was in the public domain the blogosphere took over and soon – with next to no promotion – Post-Nothing went gangbusters. Pitchfork and other online tastemakers started heralding Japandroids’ talents from the (virtual) rooftops, and before you can say, ‘We’re getting the band back together!’ they had the band back together and the rest, as they say, is history.

The ensuing Post-Nothing tour that they ended up undertaking saw them play 200 rapturously-received shows in over 20 countries, and it was only a matter of time before they were writing and recording 2012’s follow up, Celebration Rock. That album built even further on Japandroids’ knack for anthemic, celebratory rock’n’roll, finding a middle ground between the arena stylings of Springsteen and the barroom mantras of bands like The Hold Steady and Fucked Up, all given their own distinctive punk-tinged twist. The chemistry between King and Prowse is almost tangible, and the way that they bounce off each other both onstage and in the studio is a joy to behold.

So whether you were already blown away by Japandroids earlier this year when they dominated Laneway or are a complete newcomer to their incendiary and primordial live show, do yourself the proverbial favour when the pair hit stages near you this August and September for their second Australian jaunt for 2013 – they don’t call it celebration rock for nothing!