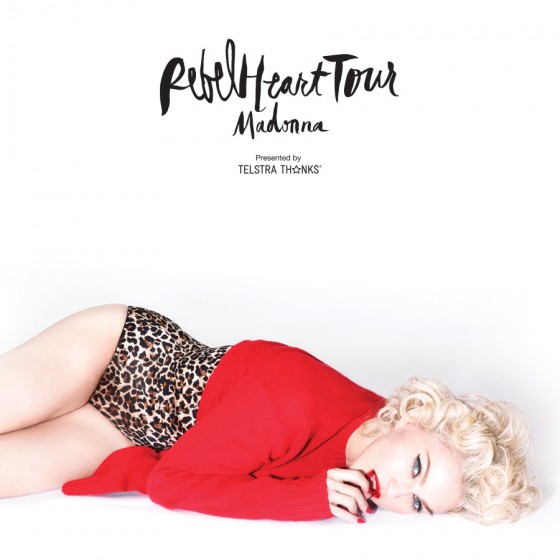 Live Nation announced that due to scheduling changes, Madonna’s Brisbane concert dates previously scheduled on Saturday, March 26th and Sunday, March 27th will move ahead one week with the revised dates changed respectively to Wednesday, March 16th and Thursday, March 17th. There is no change to the venue which remains the Brisbane Entertainment Centre.

Tickets for the Brisbane concert previously scheduled on March 26th will be valid at the Wednesday, March 16th event.

Tickets for the Brisbane concert previously scheduled March 27th will be valid at the Thursday, March 17th event.

Current tickets are valid for the corresponding rescheduled dates and do not need to be exchanged.

Any ticket holders unable to attend on the new rescheduled dates must contact Ticketek before 5pm on Monday February 1st, 2016, to arrange a full refund (including your ticket insurance premium, if relevant). Visit Ticketek on www.ticketek.com.au or call 132 849 for more details.

There are options for fans that have purchased flights with Live Nation partners Qantas and Jetstar with a Qantas Group spokesperson saying, “Qantas and Jetstar are offering Madonna fans the opportunity to change their flights without incurring fees. Changing your booking is quick and easy, ring 13 13 13 for Qantas or 131 538 for Jetstar or contact your travel agent.”

For complete tour and ticket information, visit: www.Madonna.com and www.livenation.com.au.

Australia (June 22nd, 2015) – Live Nation announced today that Madonna will make a historic return to Australia performing live for the first time in 23 years as well as her first ever shows in New Zealand, with her Rebel Heart Tour.

The Rebel Heart Tour begins in Montreal on September 9th and continues throughout North America and UK/Europe. “Madonna continues to be one of the most successful touring artists in history. Her shows are always legendary and we are thrilled to have her back on tour,” says Arthur Fogel, President – Global Touring and Chairman – Global Music.

The Rebel Heart Tour follows the March 9 release of Madonna’s critically acclaimed 13th studio album – Rebel Heart – by Interscope Records. A week after its release Rebel Heart debuted at No. 1 in Australia making it Madonna’s eleventh No. 1 album on the Australian ARIA Charts, tying the record for most number one albums on the chart. In the United States the album shot to the top of the Billboard Sales Chart. The first two singles from the album, “Living for Love” and “Ghosttown” went to No. 1 on the Billboard Dance Charts, and Madonna subsequently set a new world record becoming the only artist to have 45 Number One songs on any chart in Billboard History. On June 16th, Madonna released the “Bitch I’m Madonna” EP featuring ten remixes from Sander Kleinenberg, Fedde Le Grand, Junior Sanchez, and more.

Along with extraordinary critical acclaim as an artist, songwriter and producer who has sold a record breaking 300 million records, Madonna’s reputation as one of the most successful, provocative and enduring live performers of all time speaks for itself. The 2008/2009 Sticky & Sweet tour is the highest grossing tour of all time for a solo artist and the 2012 MDNA tour was the most successful tour of that year.

Icon is Madonna’s official fan club. In celebration of Madonna’s return visit to Australia, Icon will host a pre-sale for current registered Icon members. Lifetime Legacy members of Icon will receive first access to tickets and VIP Packages starting Tuesday, June 23rd at 10am local times. Members of Icon from Australia and New Zealand, registered before June 15th 2015, will receive a special code to access to Icon pre-sales beginning on June 23rd at 12-noon local times.

Tickets for the Rebel Heart concerts in New Zealand and Australia will go on sale on Monday, July 6th at 10am through ticketek.com.au or 132 849 for Australia and ticketmaster.co.nz or 0800 111 999 for New Zealand.

Madonna’s Rebel Heart Tour in Australia is presented by Telstra Thanks. Telstra’s General Manager of Loyalty, Fady Taouk, said Telstra Thanks will be offering customers the chance to jump the queue for tickets to the Australian leg of the Rebel Heart Tour. “Telstra customers will have access to a pre-sale from Tuesday, June 30th at 11am through Thursday, July 2nd at 5pm as well a range of great experiences when the tour arrives in Australia. Pre-register for a unique code now at telstra.com/music.”

In both New Zealand and Australia Citi® Cardholders will be eligible for a pre-sale opportunity beginning Wednesday, June 24th at 10am through Friday, June 26th at 5pm. For tickets visit livenation.com.au / livenation.co.nz.