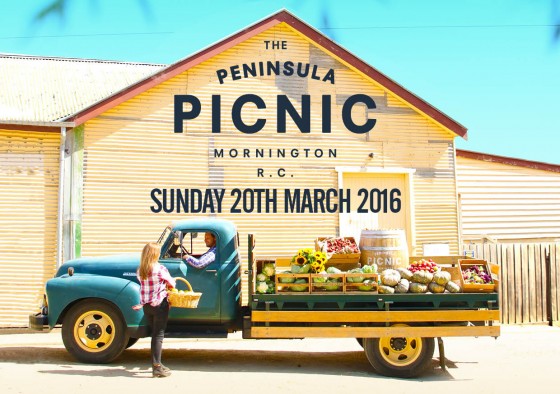 Get ready to raise your glass! We are thrilled to announce another stellar line-up of wine-makers and distillers to join the 2016 Peninsula Picnic, including Circe, Crittenden Estate, Montalto, Paringa Estate, and Prancing Horse Estate, as well as artisanal spirit makers Bass & Flinders Distillery and local providore Merricks General Wine Store.

With a hand picked selection of beautiful wine from the local Peninsula region, perfectly matched to the already announced line-up of delectable, locally sourced food from some of the region’s finest local restaurants, Montalto, Terminus at The Flinders Hotel, The Long Table, Dee’s Kitchen, Max’s at Red Hill Estate and DOC Mornington to serve picnickers delicious treats from fresh, local and seasonal produce as well as Melbourne’s finest in Pope Joan and Ian Curley. New additions to the food line up for this year’s event including The Green Olive, Cook and Norman Trattoria, Merricks General Wine Store and Paringa Estate. Three of this year’s featured restaurants were awarded ‘hats’ in 2015 The Age Good Food Guide Awards including Paringa Estate, Montalto and Terminus at the Flinders Hotel.

Accompanied by a soundtrack from some of the best music this country has to offer, with ARIA Award winner Missy Higgins, bringing with her a catalogue of sweet hits for picnickers in 2016. Joining this year’s menu of music, with his blues and roots flavour will be sonic virtuoso Kim Churchill, Powderfinger guitarist extraordinaire Darren Middleton giving the Peninsula a taste of his solo offerings, rising Adelaide folk star Timberwolf and Shoreham local singer songwriter Ruby Whiting.

The Peninsula Picnic returns this March after a sold-out inaugural event in 2015 that was the Mornington Peninsula’s most extensive food, wine and music gathering.

This year’s event will feature a bigger line-up, a larger site, even more shaded areas!

The 2016 Peninsula Picnic capacity is capped to ensure all of our patrons and their families have the most wonderful day enjoying the best of what the Mornington Peninsula region has to offer.

With a country harvest atmosphere, The Peninsula Picnic takes place over one unique day in the leafy and sea-salted surrounds of Mornington Racecourse, and is the recipe for that perfect regional escape or family day out.

“The Mornington Peninsula, about an hour from Melbourne, is beautiful with its boutique wineries, rolling hills and long beach walks. Increasingly it’s known for its gourmet food too. Put it all together and it’s a stylish place, indeed. With this new venture, it may just redefine the very idea of a simple Sunday picnic.” The Guardian

“A lovely day, and one I won’t forget for some time to come.” Cargo Art Magazine

A Menu of Wine

Circe
Circe is a partnership inspired by growing up on the Mornington Peninsula and a love of Pinot Noir.

Dan Buckle and Aaron Drummond met at Mount Langi Ghiran in 2007. After a vintage of Shiraz it was inevitable that the conversation would turn to any other varietal except Shiraz. With both Dan and Aaron growing up on the Mornington Peninsula, they were keen and curious as to what we could do with Pinot Noir from such great soil.

The name Circe derives from Homer and is a nice metaphor for the seductions – and perils – of Pinot Noir. Dan studied arts at university before realising it wouldn’t help him get a job. He then went on to oenology. At least his studies of the classics helped the local boys develop a name.
circewines.com.au

Crittenden Estate
Garry and Rollo Crittenden are dedicated small scale wine makers with an exciting range of handcrafted wines. Today, their efforts are channelled into producing small batches of wines that elegantly and emphatically speak of their varietal and geographic provenance under the Crittenden Estate, Los Hermanos, Pinocchio and Geppetto ranges.

“Our family takes great care, pleasure and pride in the wine it produces. The portfolio spans estate-grown, cool climate wines of Burgundian origin, new and exciting Italian varietals and other regional classics from both the Mornington Peninsula and further afield from some of central and north-east Victoria’s finest vineyards.”

While that is indicative of how far this family company has come since planting its first vines on the Peninsula more than 30 years ago, there is one overriding and essential constant linking all phases of its winemaking endeavours: a deep-seated commitment to doing everything possible in the vineyard that leads to the finest fruit quality and, afterwards, treating that fruit in the winery in such a way as to ensure it produces inspirational wine that reflects such care, passion and craftsmanship.
crittendenwines.com.au

Prancing Horse Estate
Tony Hancy’s wine journey began in earnest when he combined his love for wine and touring around Europe into cycling adventures through the wine regions of France. In the mid-1980s he developed a serious interest in French wine that during the early 1990s, led to cycling through regions including the Loire Valley, Provence, northern Rhône, Champagne and Bordeaux. The bike riding eventually took Tony and his wife Cathy to almost every significant wine growing area in France but it was Burgundy that attracted them and inspired them the most. The couple returned to the region four or more times because, as Tony puts it, “We fell in love; not just with the wine but with the industry of the place, the warmth, the vitality, the tremendous endeavor in these small plots of sacred soil.”

In reality it was an ambition to get involved in a business that was both local and global that led Tony and Cathy to purchase the Lavender Bay vineyard in 2002 and establish Prancing Horse Estate.
prancinghorseestate.com

Montalto
Montalto was a long time in the making. In the 1980’s John and Wendy Mitchell lived in the UK, and spent summers in the south of France overlooking the vineyards rolling down to the Mediterranean. It was there, over lazy summer lunches, glass of rose in hand, that they dreamed. The pair decided to plant a few vines at their home on the coast of the Mornington Peninsula. When the couple returned to Australia in 1990, John set about turning the dream into reality, and studied viticulture at the University of Melbourne’s Dookie campus.

In January 2002 the dream became a reality and Montalto opened to the public.
montalto.com.au

Located in the heart of Victoria’s beautiful Mornington Peninsula wine region, the home property has 10 acres (4.2 ha.) of vines planted with Pinot Noir, Chardonnay, Shiraz and Pinot Gris. The current winery was built in 1998, and houses an outstanding a la carte restaurant on the upper level. In 2014 Paringa Estate managed 55 acres (22 ha.) of vineyard and in an average season the winery processes around 200 tonnes of fruit or 15,000 cases of award winning wine.

Paringa Estate is one of the most awarded wineries in Australia, particularly for Pinot Noir and Shiraz.
paringaestate.com.au

Merricks General Wine Store
A Peninsula icon since the 1920s, the store has been a long-time meeting place and store for the local community and visitors alike. The authentic charm of the corrugated iron from the original store and home remains. Today the award-winning heritage buildings house a bistro, art gallery, cellar door and produce store.
mgwinestore.com.au