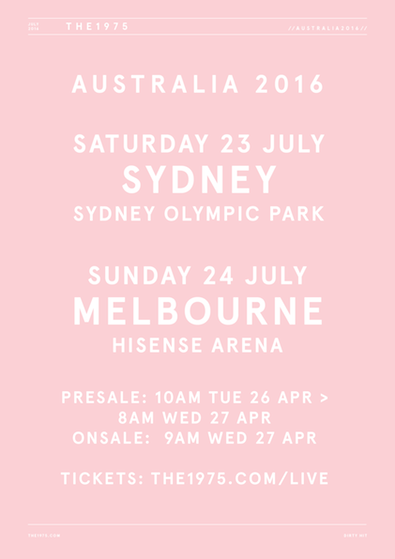 The 1975 continue to live up to their reputation as one of the world’s biggest bands, selling out their January Australian shows in a matter of hours and debuting at #1 on the ARIA and iTunes charts with the release of their second LP I Like It When You Sleep For You Are So Beautiful Yet So Unaware Of It. Recorded in Los Angeles and produced by charismatic front man Mathew Healy and band mate George Daniel alongside production collaborator Mike Crossey, the album distils their love of 80s sonics into something that sounds impossibly now. They were the first act in the world to live stream a show on Apple Beat 1.

2016 is panning out to be another massive year for The 1975 with a run of arena shows booked from Brooklyn to Vancouver, and slots on some of the worlds biggest festivals including Coachella and Glastonbury. Australian fans were given a little taste of their epic new live show last year, this time round they will be bringing all the bells and whistles with them this July… expect a live production odyssey!