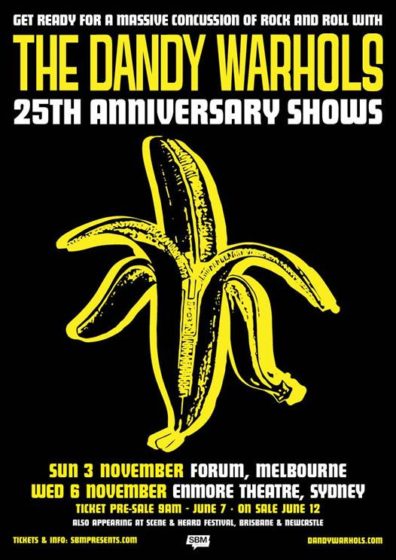 Get Ready For A Massive Concussion of Rock and Roll with The Dandy Warhols as they’ve just announced they’ll be heading to Australia to perform a special run of shows to celebrate their 25th Year Anniversary. The band will be performing in Melbourne at the Forum on Sunday 3rd November and in Sydney at The Enmore Theatre on Wednesday 6th November.
END_OF_DOCUMENT_TOKEN_TO_BE_REPLACED

In 1994 a groovy little band outta Portland, Oregan burst into life – they were called THE DANDY WARHOLS. There were a group of friends who ’needed music to drink to’.
END_OF_DOCUMENT_TOKEN_TO_BE_REPLACED

Alternative Press called it “a scattershot bagful of wild rides and demented ditties and an album of maniacal depth and vision” whilst MTV described it as “a real piece of art, with an unmistakably original sound and incisive storytelling.”
END_OF_DOCUMENT_TOKEN_TO_BE_REPLACED