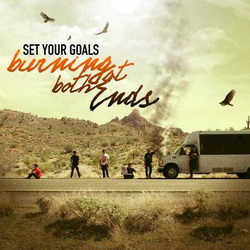 I was surprised in the most part to find out that Burning At Both Ends was an album from the San Franciscan boys, Set Your Goals. Burning At Both Ends did disappoint, certainly those who favoured the bands style that exuded melodic hardcore on Mutiny! The bands extremely well received full-length album released in 2006. At points I found Burning At Both Ends to be confused, torn between styles of pop punk and the stereotypical vocal cadence that is Tom Delonge in a nutshell, and the dynamic and enthusiastic melodic hardcore influences that were prominent in Set Your Goals older, well known sound. Although to be fair the band is exploring a newer sound and there are a few great tracks on Burning at both ends that certainly can win a listener over.

“Cure For Apathy” was a shaky opener for the album, with the first 30 seconds seeming forced and displaced, a little over done. This opening slot could have be filled with a number of tracks of the album that would have made for better openers, regardless however, my hopes for Burning At Both Ends weren’t crushed and sure enough by the second track, “Start The Reactor”, a strong and united pop punk sound came through and altogether it was a great song that definitely got the album going for me.

“Trenches” was another track I favoured on the album, it echoed a slew of popular pop punk bands with the catchy lyrics and rhythmic drumming. It definitely was a highlight of Burning At Both Ends for me and it made me feel like bouncing around and letting go of all inhibitions.

Shamefully, I have to admit another favourite for me was “Product of the 80s”, which even for the lyrics alone-that very much reminded me of MC Lars was just plain awesome. Extremely communicable, I struggled to remove it from the repeat loop on my Ipod (lucky it wasn’t the first track, otherwise I may not have made it through the rest of the album).

I may have been a bit harsh to begin with; Burning At Both Ends certainly is confused and misplaced in comparison to the strong and sincere sound that enthralled fans with previous releases from Set Your Goals. Regardless however, the album is still mostly good, not amazing, but good, with some tracks definitely deserving a listen or two. Set Your Goals may be hoping to further delve into pop punk and they have certainly done this with Burning At Both Ends, which as a whole is a vibrant pop punk album.

END_OF_DOCUMENT_TOKEN_TO_BE_REPLACED

ANTHRAX redefined metal in the ’80s, stressing anger, speed, and emotional intensity over big hair and power ballads. After a stunning performance at the Sonisphere festival a huge campaign was waged by the fans to get John Bush back on vocals. We can proudly announce that John will indeed be fronting Anthrax for their Soundwave performances and this will surely have the bands faithful frothing at the mouth!