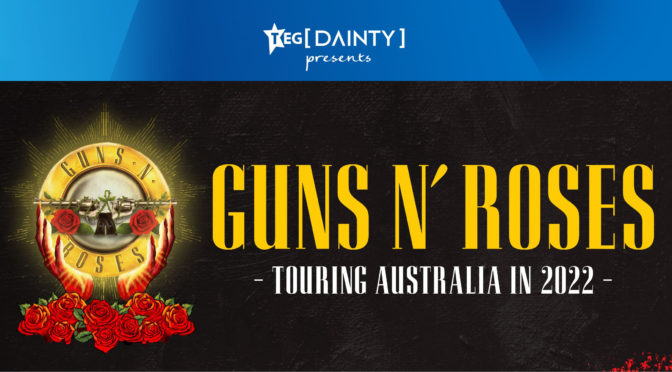 What was to be the biggest stadium rock tour of 2021 is moving to Summer 2022! TEG DAINTY announced today that Guns N’ Roses massive Australian tour will move to new dates in November and December 2022 due to Covid-19.

For all the fans who have purchased tickets to the highest grossing tour of 2021, it’s very simple, just hold onto your ticket and you will have the same spot, in the same Stadium, in Summer 2022 for an EPIC 3 HOURS of Guns N’ Roses!

Axl, Slash and Duff have told fans…
‘Australia, we can’t wait to see you bigger and better next Summer!’
A special release of tickets to the new dates in 2022 go on sale today at TICKETEK.COM.AU

Head to www.tegdainty.com for all ticketing and tour information.

Paul Dainty AM, President & CEO of TEG DAINTY said today “We worked for months with the various state governments trying to create a safe environment so that the Guns N’ Roses tour could proceed this year.  Despite our best efforts it recently became clear that we could not proceed in 2021 and it has taken time to finalise a plan where we could be confident of completing a national tour of Australia next year.

This will be the biggest stadium rock tour of Summer 2022 with hundreds of people on the road, a massive production and logistics involved.”

A new release of tickets are on sale today in all cities at ticketek.com.au. 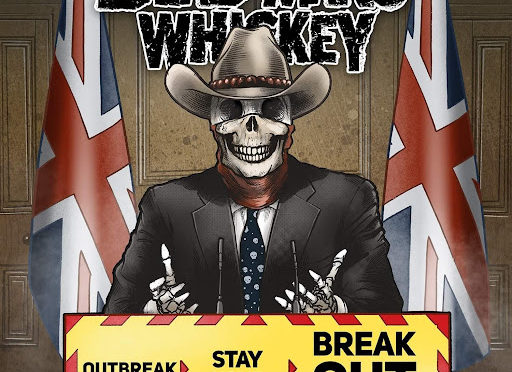 Following the release of their 2017 debut album Under the Gun, and perhaps the re-mastered and re-packaged 2019 version, Dead Man’s Whiskey have wasted no time in becoming one of the UK’s hottest up and coming hard rock acts.

Perth based Indie Folk artist Duncan Saige has just released his heartfelt new single and music video ‘Start All Over’, which was premiered on Double J. The single focuses on reinventing yourself in the face of inevitable hardships.

Duncan has also announced a run of WA tour dates to celebrate the release. 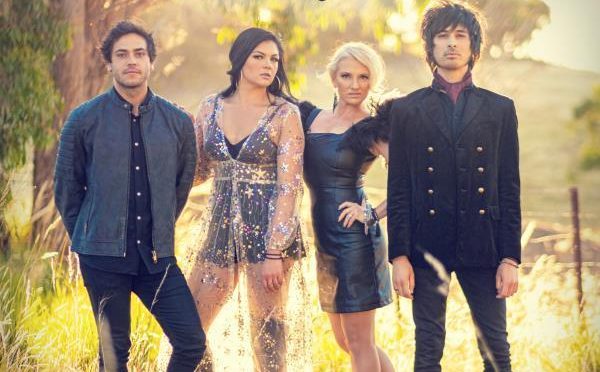 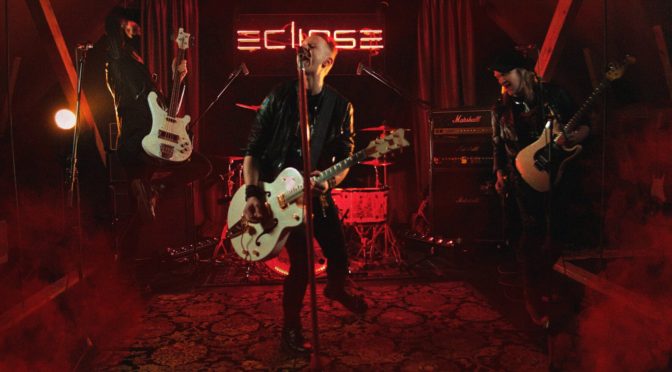 Coming off their most successful album yet, Paradigm (which includes the massive single Viva La Victoria with 15 million streams and counting), Sweden’s Eclipse are back with their new studio album Wired. 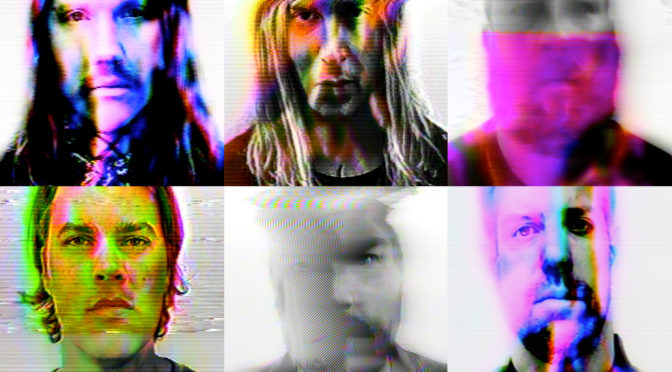 Underoath haveshared Pneumonia, the third single off their highly anticipated seventh full-length, Voyeurist, set for release on January 14 via Fearless Records. Pneumonia is a sonic and lyrical voyage through death, partly inspired by the passing of guitarist Tim McTague’s father. Clocking in at just over seven minutes, the track shows Underoath continuing to push their boundaries as a band, serving as one of the most melodic and experimental songs in their career. As the track progresses, the listener is met with eerie guitars, pulsating drums, and an earth-shaking switch from Aaron Gillespie’s lush vocals to Spencer Chamberlain’s intense screams. 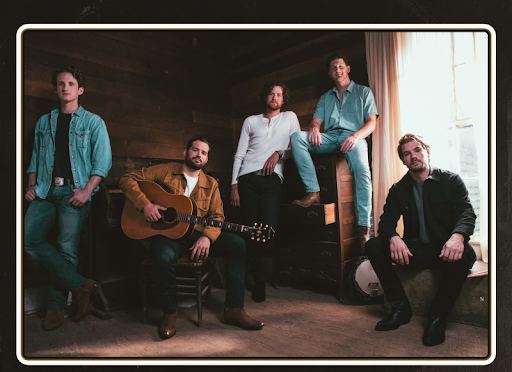 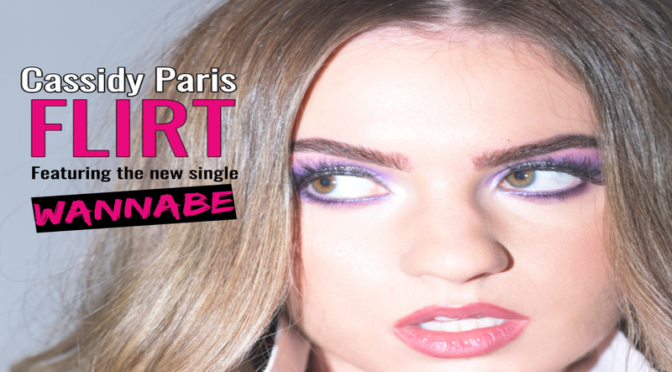 The EP features the edgy pop-rock anthem, Wannabe (her 7th single at just 18yo), which sees Cassidy delivering a song based on personal experience about society’s obsession with popularity. 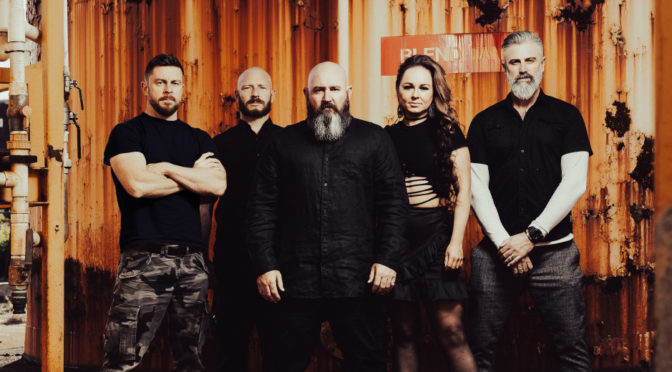 Q: Descending Death is the band’s fourth single release and marks yet another stylistic turning point. How would you describe your sound to someone who hasn’t heard you?

A: We try to be as heavy as we can while still retaining melody in the songs. At least at this point in time, there is no WTD template, so to speak: we write whatever comes to us and if we like it, it goes to the next stage and Ben (Pennifold, singer) will add his lyrical magic to it and it becomes a Where the Devil track. We don’t have a set list full of modern tech metal, or groove metal, or thrash or any one genre. I think for us, there are some touch points that you can find throughout all our songs, like certain chord types or chug techniques that might help tie it together, but it’s really Ben’s vocals that are the link between our different sounds.

Really, I think the fact all our songs have been a bit different has been more a plus than a possible negative. 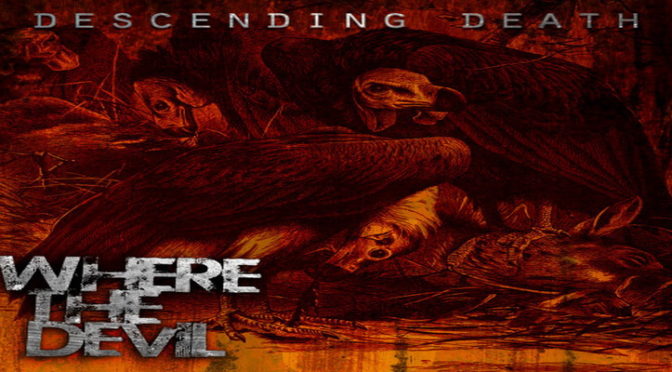 Where the Devil‘s latest single, ‘Descending Death’ is released on streaming services August 27. It is perhaps the antithesis of the band’s last outing, ‘Misery’; ramping up the tempo and the aggression to new levels of brutality. 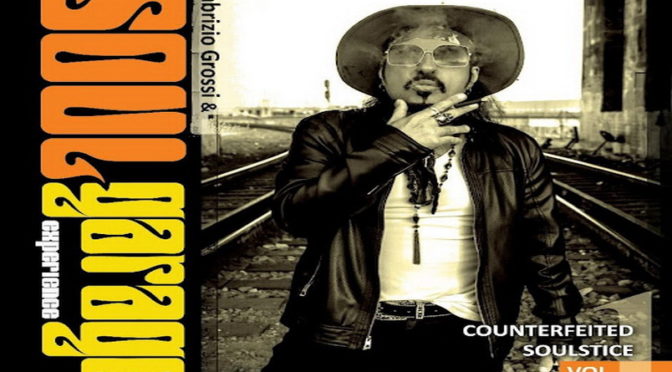 This record is hard to describe, and impossible to pigeonhole – Crazy, Eclectic, Uplifting and Fabulous all in the one release!

There is more crossover here than in an underground record store after an earthquake, with Blues, Soul, Funk, Grunge, Gospel, Reggae and straight ahead Rock’n’Roll blended into an infectious groove-laden melange of old school roots, blues and rock.

Fabrizio “Fab” Grossi is a bass-player and producer first and foremost, and is probably best known for his work with Supersonic Blues Machine (with hris Barras, Kenny Aronoff and a cast of legends), Starbreaker (with Tony Harnell), and Goodfellas (with Steve Lukather) as well as all the production work for Frontiers Records in Italy (Glenn Hughes, James Christian, Robin Beck, House of Lords and Dave Navarro among others).   He has also worked with Billy Gibbons, Pat Travers, Steve Vai, Alice Cooper, Eric Gales, and the man who brought the funk, George Clinton and his Parliament Funkadelics, and is currently producing Gary Clark Jr, Aaron Keylock and Susan Santos.

The debut EP, featuring Stevie J and Danny, backed by Paul Laine on bass, was released in 2020 and garnered some really positive responses from the underground rock and metal communities in Australia and over in the UK, where the band is tied up with the NWOCR crew, and performed at one of their excellent Webfest events.

The new album, Wait For The Night, again produced by Paul Laine (The Defiants & Danger Danger), kicks off with an absolute ripper in Date With The Devil, which has a killer riff, powerful rhythm superb lead breaks, and shows Danny’s vocal range to be pretty impressive – from a low throaty roar to soaring highs, with a lot of Bruce Dickenson and Rob Halford in the mix.  Daze of Delirium was on the EP, and delivers a solid punch from the crushing guitars, but has a really catchy harmony chorus that my EP review compared to a cross between Backyard Babies and Reckless Love, hard, heavy and melodic at the same time.

Acoustic guitars and atmospheric keyboards open up Don’t Wait For Me, and sees Danny with a pure, clear vocal that spans several octaves and hits some impressive highs.  The expectation builds through the song as you think it is going to explode, and sure enough the power ramps up as the solo erupts, leading into a true power-ballad for the final chorus, and then slowly fades back out as it started.

There is a more melodic rock feel to the next two tracks without losing the heaviness of the band’s overall sound.  Killer At large sees some superb drumming from Jason, and a searing lead break from Stevie prior to each verse, in which Danny absolutely nails the vocals.  If you love your Skid Row, Danger Danger and Dio then this band will hit a few of your hot buttons.  The opening riffs to Last Goodbye are typical of the band’s sound, with a Randy Rhoads guitar feel, and a wall of harmony vocals that contribute to the immense sound.  Stevie and Dave share the guitar heroics here, and the thought if this one being played live makes the mouth water.  The ending is just awesome!

I assume the guys have re-recorded Love’s Got A Hold On You from the EP, and this still sounds huge, with the slightly menacing tone of the verse over the solid riff, before the superb pre-chorus and then the massive hook-line in the chorus that brings in hints of 1987-era Whitesnake, and a delightful harmony guitar break that leads into the final refrain and a reprise of that killer riff under Danny’s howls!

The beginning of Sign of Times provides an absolutely devastating riff from Stevie – very Jake E Lee or Vivian Campbell from those early Dio days, and Danny gives a barnstorming performance on lead vocals here, and the chorus is pure 1980’s melodic heavy rock.  Solid bass and drums from Glen and Jason provide the piledriving foundations, and then Stevie opens up restrained but powerful solo that really shows off his dexterity and skill.

From the first seconds of Stronger you just know that this is going to be a crowd-pleaser, with a ball-tearing riff, enormous vocals, and then the catchiest chorus on the record with some epic backing harmonies. This takes me back to the likes of White Lion, Valentine and Hurricane – great melodic hard rock bands of the late 80’s and early 90’s, and Wicked Smile do this in style.  The title track, Wait For The Night has another of those riffs, some harmony lead breaks, and a tour-de-force vocal performance from both Danny, and the backing in the chorus. The band are on fire from start to finish, lead guitars tracking the lead vocal melody, and bass and drums smashing out the accents.

Album-closer is another riff-fest and the opening passage is the most brutal thing the band has ever done.  Danny’s opening vocals are dark and brooding, and the chorus keeps the malevolent feeling, while providing another example of a hugely contagious hook-line.  We Fall is a killer track to end on, with a mid-section that sees the guitars let rip before diving back into a pre-chorus and chorus that showcase Danny’s almost operatic vocal style – so powerful and strong, with such clarity of tone that is quite unusual in the modern rock world.  He also has the longest hair in the world!

I said in the EP review that there is nothing much totally new in the rock music world, and that remains true, however the Australian rock scene has generated a fairly small number of high-quality melodic hard rock albums – Roxus, BB Steal, Ragdoll, Electric Mary and Dellacoma all spring to mind, along with Stevie’s other band The Radio Sun.  Wicked Smile have added a new dimension to this group, with a heavier tone, without abandoning the melodic sound that runs through the whole record.  This band deserves to get some much wider exposure in the UK, Europe and USA when we are all allowed out again! 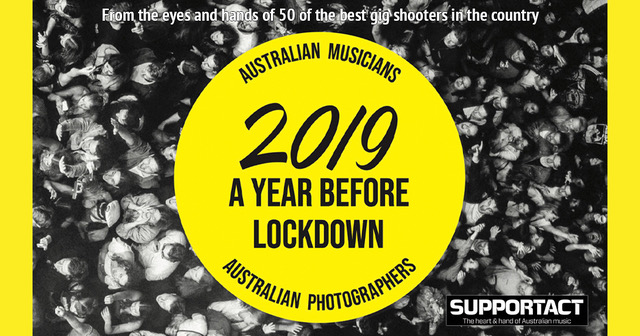 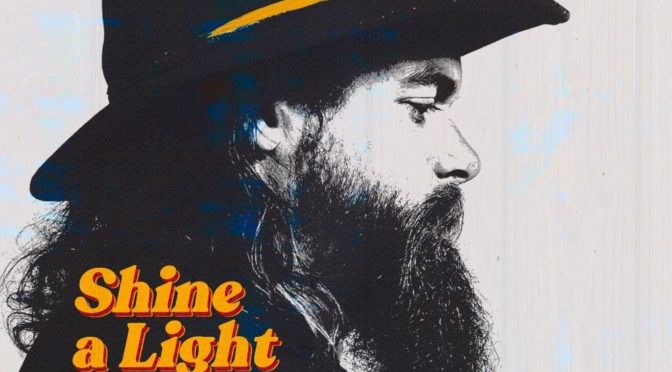 Last Light on the Highway was one of my absolute favourite reviews of 2020, and the band one of the many great discoveries of the year, so it was terrific to find a new album on the horizon from Robert Jon & The Wreck, country blues-jam rockers from Southern California.

This is Australian country music at its very finest – a truckload of great songs delivered by the larger than life epitome of the genre in Jayne Denham – outdoing JBJ doing his outlaw cowboy rock in style and quality both!

The title track, Wanted, co-written with Matt Scullion and Tory Kemp, has a great video to go with it, and this was the inspiration behind the country-rock and western theme to the whole album.