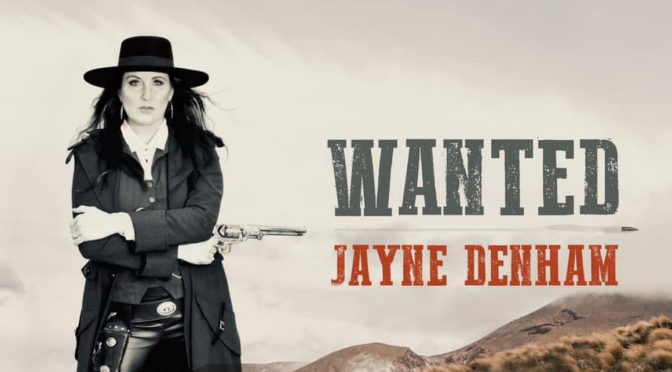 This is Australian country music at its very finest – a truckload of great songs delivered by the larger than life epitome of the genre in Jayne Denham – outdoing JBJ doing his outlaw cowboy rock in style and quality both!

The title track, Wanted, co-written with Matt Scullion and Tory Kemp, has a great video to go with it, and this was the inspiration behind the country-rock and western theme to the whole album.

Produced by Brian White, and with songwriter collaborations from Brian Bunn as well as Megan Conner and a few others, the vocals for the album were recorded in the Blue Mountains before heading over to Nashville by email for the band to lay down the backing tracks.  The album is sort of a concept album, but more a set of songs that have a bit of a devil-may-care gunslinging shoot from the hip attitude, and a singer who is loving the dress code that goes with it – “high-heeled Jesse James” indeed!

We get a spaghetti-western intro, with the wailing trumpet over the echoing guitar, before this enormous voice opens up with the first verse of Wanted, which leads up to the epic chorus which sees the band start to flex their muscles, and throw out the crowd-shouted backing vocals, but they struggle to match the power and intensity of Jayne’s voice!  There is some terrific acoustic guitar work before the solo kicks in in the middle-eight, and then we get a couple more choruses before the close.

I get goose-bumps at the intro to Dear Jayne, a beautiful letter to her younger self, with more virtuoso guitar work in both the rhythm and the haunting guitar-licks in the background, and the low-key echoing backing vocals that provide a really different counterpoint to the main harmony line.  Better Make It A Double is up next and gallops over the horizon like a Mustang, with a real Hank Marvin guitar twang and a shuffling beat from the drums, and another powerful vocal – coming across like how Cher might deliver an Alannah Myles or Shania Twain track – this is a voice of absolute honesty and guts, and with a fierce and passionate delivery, that never loses the clarity however broad the range.

There is a old-school barroom feel to the ballad of Raggedy Ann, the tale of a western courtesan getting involved in a wild brawl driven by two competing admirers, one city and one country, and the pictures drawn in the lyrics just take you to the bar to watch the carnage play out!  There may be a bit of Jayne’s own experience in Highway Vagabonds, which is a much more upbeat country pop track than the previous songs – the lyrics are a bit modern wild west, but the sound is much more present-day country than vintage western.  This could well be a massive radio hit, and has the ability to make it over in the USA radio market to my ears.

Rainstorm opens with some sound effects and is a gloriously melancholy country ballad that allows Jayne’s voice to explore her extensive range, and has a marvellous arrangement with harmony vocals, and a duet with Troy Kemp which is truly memorable.  The cowgirl attitude comes roaring back with I Wanna Remember This, which smoulders along through the verses before the chorus is spat out dripping with scorn, and builds up to an even more intense final chorus, with some amazing wails over the guitar breaks.

An earlier release from the album is Better Settle Up and this is modern country rock at it’s very best – a female Jason Aldean with a voice to die for!  The song was written by Canadian Jessica Mitchell with Todd Clark and Gavin Slate, and “Short dress cheap shoes nothin’ but bad news” is a great closing line, delivered with such a sneer it bites!  A little interlude of more spaghetti western sounds leads into Aftermath which is a piano driven power ballad, with evocative lyrics and Jayne excels once again with her voice.

The album winds up with a real Aussie country anthem in Beautiful World which has a verse that gives no clues as to how it is going to progress, and then opens up into the most uplifting and joyous chorus, and then heads into a stripped back section before the tempo picks up again, with the slightly Celtic sound in the percussion for another rousing chorus to close the show.

Jayne Denham has what must be one of the most powerful and dynamic voices in Australian country music, and she has used it to brilliant effect all through this album, with a bunch of superb musicians backing her up, but who never outshine the energy and passion of the main vocal line!  Wanted is a stunning Tour De Force, and I can’t wait to get the chance to see these songs performed live.

All being well, and COVID-permitting you can catch Jayne performing at one of her upcoming shows below: