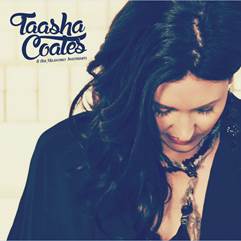 With success as the voice of the multi ARIA Award winning folk-rock darlings The Audreys, singer/ songwriter Taasha Coates has now released her first solo album ‘Taasha Coates and Her Melancholy Sweethearts’ and is preparing to hit the road with a string of tour dates that will no doubt keep fans happy.

During The Audreys temporary hiatus, Taasha kept busy in the studio recording with fellow singer-songwriter and producer Shane Nicholson; showing off a new voice through her solo material.

I’m really proud of these songs. They’re raw and real and very personal, and they were a lot of fun to record and have been great to play live. I think maybe for the first time in my life I feel like an actual songwriter.

With elements of sauciness and sadness, in a more personal and direct style; the album sees Taasha display her incredible, enchanting vocals as she flirts with the Alt-Country/ Americana genre. The first single from the album ‘This House is Gonna Burn’ is complimented by a truly stunning clip. See below for clip.

In September, Taasha will be a guest songwriter at SongHubs in Brisbane before heading off to Austin, to House of Song, where she is 1 of 3 Adelaide Song-writers selected to participate in a songwriting residency working on some unfinished Al Brumley songs. Taasha will then head to Nashville to showcase her new tunes at prestigious Americanafest.

Not to let her Aussie fans miss out, Taasha will come home to perform a string of shows, kicking off in Adelaide from October.

Presented by The Music: