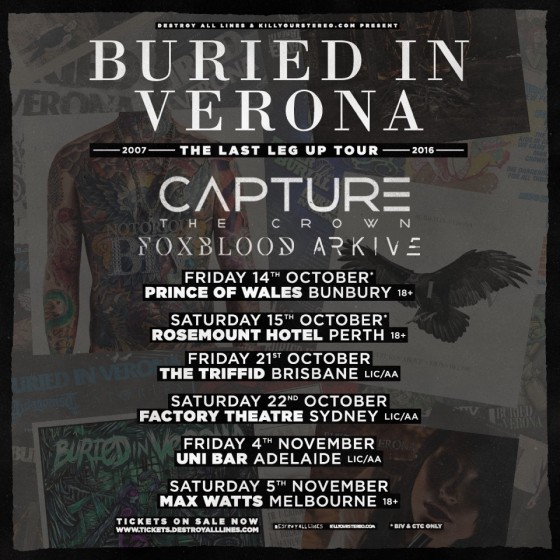 There comes a time when the journey ends, the road stops, the lights go out. After a decade spent leading and shaping the Australian heavy music scene, Sydney’s Buried In Verona are about to play their final scene.

A national tour through October and November with Capture The Crown, Foxblood and Arkive will be the bands last ever shows.

The journey has not been an easy one for BIV. Deceived by those they trusted most and staring oblivion in the face, time and again they regrouped, recruited fresh blood and refused to let the world get the better of them. A band who had been pushed to their limits, faced unbelievable odds yet still moved forwards to deliver both on record and on the stage.

After five albums, the last three cracking the Australian Top 20 Album Chart, and a year after their latest slab of revenge fuelled vitriol and bile that was, Vultures Above, Lions Below (UNFD), now is the time to seek paths anew.

Having been through enough turmoil to last several careers themselves, Capture The Crown have returned home with a new outlook of ‘fuck the past, carry on, live for now’ the Sydney metalcore outfit are planning to drop their third full length album in early 2017. Positively charged with a reformed line up, the forthcoming album is a fresh start and might as well be considered album zero as they’ve hit reset. Fans of their old stuff are urged not to miss them on this run as it may be their last chance to experience certain songs from their back catalogue…

Ushering in a new age of Australian metal, Melbourne’s Foxblood are wasting no time making their mark.

Their debut album The Devil, The Dark & The Rain is a haunting blend of meldoic choruses, bone crushing breakdowns and seriously catchy riffage. It has industry leaders sitting up and paying attention, and with a rapidly growing fanbase the future of heavy music is in safe hands.

From Melbourne’s edge come Arkive, a six piece post-hardcore/djent unit offering a unique blend of melody and groove to the heavy music world. Their fresh approach in an over saturated genre has seen them stand out via hard hitting riffs set against feel good melody. Their new single Everstorm is to be released later this year.

This is your LAST chance to see one of the countries most Notorious metal bands before their curtains are closed, forever.