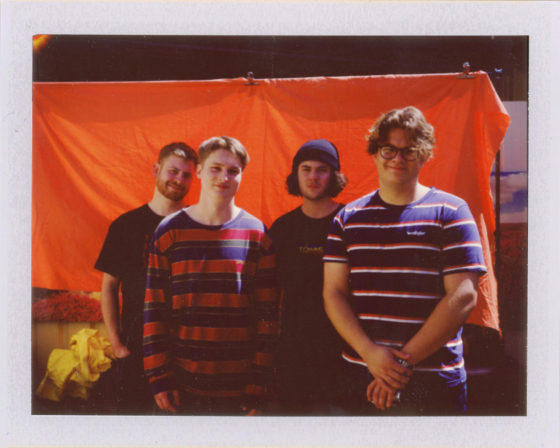 Although the loveable punk rockers are still recovering from their string of sold out East Coast shows and opening set at this year’s revered Groovin’ The Moo festival, Newcastle’s Split Feed are not ones to slow down anytime soon. Premiering on triple j’s Home & Hosed this week and out today is arguably their heaviest release to date, ‘Homesick’ – joined by a selection of fresh live dates to close out the year.

With 90s and early 00s punk rock firmly in their foundations, the anthemic new single is a fitting example of how the four-piece have masterfully expanded to new heights, developing into a much more raw, mature and modern sound. Brash, bold, and caked in addictive melodies and riffs, ‘Homesick’ is undoubtedly a Newy chant, one that is an ode to broken friendships and relationships.

A major change to Split Feed’s usual recording process, ‘Homesick’ was a lengthy DIY process, written quite independently by each member. From writing chord progressions, sending demoes to bandmates, to piecing all sections together and writing over each section individually, the track took about a month to finish, ultimately a worthwhile wait. Visually the quartet own this do-it-yourself aesthetic throughout their latest music video too, performing in living rooms, backyards, and even occasionally bathtubs, the group’s quirky clip is a fitting addition to their fun and lively sound.

Split Feed have managed to cement themselves as one of the tightest punk bands on the East Coast thanks to their pair of EPs Late Bloomer (2017) and Googolplex (2015). Since then the band have gone on to support rock heavyweights As It Is (UK), The Living End, The Bennies, The Hard Aches, British India, The Rubens and Skegss, alongside a handful of their own headline tours.

With no time to spare, the quartet will be heading back on the road, this time in support of ‘Homesick’. Beginning with a pair of shows alongside Sydney’s Perspectives, fans are encouraged to come and get rowdy with Newcastle’s rowdiest as they embark on their short but sweet tour throughout NSW and ACT at the tail end of this year.