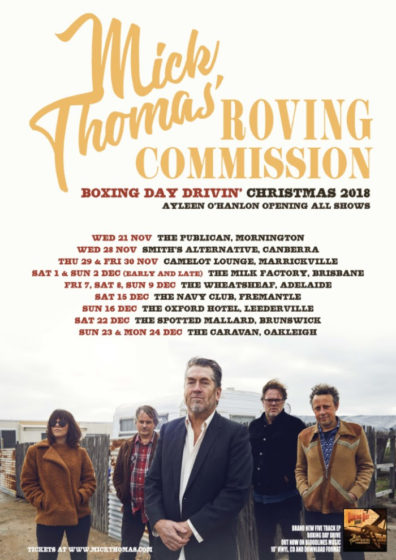 Treasured Australian alt-folk outlier Mick Thomas and his band The Roving Commission have just announced the forthcoming Boxing Day Drive EP and his traditional string of pre-Christmas dates across the country.

Compiled from particularly fruitful and inspired album recording dates in Memphis, Tennessee, Boxing Day Drive offers long-time fans a tantalising glimpse into the sessions that begat the band’s forthcoming full-length album release Cold Water DFU – due for release in 2019 and destined to leave yet another high water mark on Thomas’ already storied career.

The journey back to Memphis was both a spiritual and musical pilgrimage for Thomas and his long-time collaborator Mark “Squeezebox Wally” Wallace, returning to the scene of the creation of Wedding Parties Anything 1989 masterpiece The Big Don’t Argue, though this time with Kevin Houston and Cody Dickinson – rather than Cody’s late father and recording legend Jim Dickinson at the helm (Kevin was Jim’s long time studio engineer).

Mick Thomas’ Roving Commission will launch Boxing Day Drive with a special media show on the 12th of November at the Merri Creek Tavern in Westgarth, and as has been his tradition for many years Mick has also announced a run of Christmas dates for fans across the country bringing his own brand of festive cheer, new material and a grab bag of long-time favourites to the faithful.