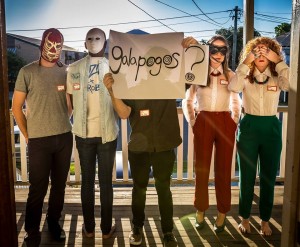 Galapogos are launching their second album “Feel Or Suffer” at The Zoo, Brisbane on Friday December 6, 2013

:: What track changed your life ::
I think “Sandy” which was performed by John Travolta on the Grease soundtrack describes a lot about the kind of ache I love to hear in any music I listen to, so that’s probably the first song that comes to mind when I think about the concept of having my life changed by music. I was 9 when I first heard it and I thought it was the coolest thing ever.

:: What is your favourite Album ::
Welcome To Sky Valley by Kyuss

:: Name a band or artist we should checkout ::
Body / Head

:: When you think of Australia, you think ::
Heat

:: Worst thing to happen to music is ::
That the corporate machine somehow convinced people that in order to be successful you have to play by a certain set of rules that requires everything to be under 4 minutes

:: Best thing about the current music industry ::
That you can exist as an artist regardless of whether you meet industry standards

:: When you were younger you wanted to be ::
A range of different occupations depicted by Kevin Costner on film from 1991 through to 1994

:: First album you ever bought ::
“Waking Up The Neighbours” by Bryan Adams when I was 8 or 9

:: First concert you went to ::
Pantera at Festival Hall in Brisbane 2001

:: Last concert you went to ::
Deftones at The Tivoli in Brisbane 2013

:: The best boredom buster is ::
Sleep

:: The best film you ever saw was ::
High Fidelity

:: Your ultimate snack is ::
Grapes and Cheese

:: The first thing you do when you wake up is ::
Go to the toilet

:: Best piece of advice you’ve received ::
“Always be suspicious of someone who has a weak handshake” which was given to me by my Dad

:: Your biggest aspirations ::
To be understood

:: Best/worst gift you’ve ever given/received ::
I got the opportunity to meet and have a conversation with Mark Lanegan courtesy of my brother Ben. That is still the coolest thing anyone has ever done for me.