Pony Up return to Australia to promote their new album Stay Gold!

Make Love To The Judges With Your Eyes was the first full-length album from Pony Up. And what an album it was – totally brimming with clever lyrics, super catchy songs and a heap of vibrancy, it was an exhilirating collection of great pop tunes. To promote the album the band toured Australia extensively in the summer of 2006. People loved them live and they loved them on radio to the point where their single The Truth About Cats and Dogs (Is That They Die) would later be voted #47 on triple j’s Hottest 100.

Over the course of the next two years Pony Up toured and toured and toured, those stints included supporting The Mountain Goats and Camera Obscura as well as performing a swag of duties in the UK and Europe for the first time. Later that year Lisa Smith and Laura Wills joined the touring line-up of The Dears. Oh yeah, and in between all this activity Lisa, Lindsay, Laura and Sarah found time to write and record a new album, Stay Gold.

Recorded in Montreal with producer Murray Lightburn (singer/songwriter/producer of The Dears), Stay Gold takes Pony Up into the stratosphere with more developed textures and arrangements, even finer hook-laden songs, and a sense of total exuberance. Lightburn has reincarnated the music in his own pop-noir-romantique image, honing and edifying Pony Up’s arrangements and soundscapes. The sonic topography has become detailed, ornate and sprawling. You’ll hear it on songs such as Manchild, Sounds Like My Wedding Night, A Crutch Or A Cradle and the album’s first single, the totally captivating Charles.

Pony Up, The Truth About Cats and Dogs 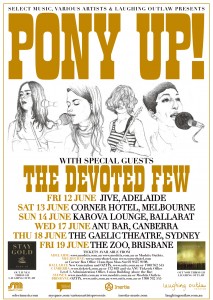