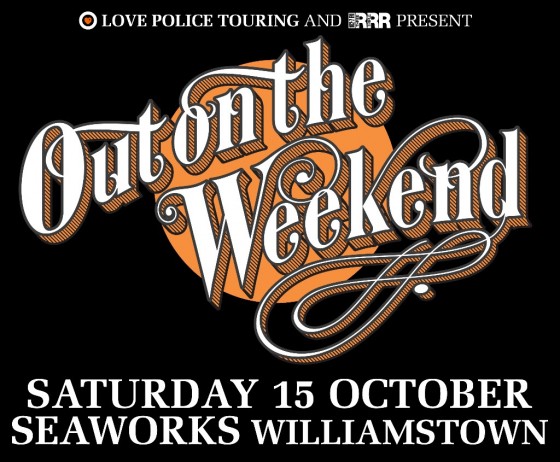 Headlining Out On The Weekend in 2016 will be multiple award winning New Zealand singer-songwriter Marlon Williams & the Yarra Benders. This will be Marlon’s first appearance at the festival and and it will also be his only Melbourne performance for the rest of 2016.

“It has been 3 years since I moved over to Melbourne. I played my first gig at Some Velvet Morning, then went all over town playing shows in the first 6 months before we had a crack at The Toff In Town to launch a live album. It was a great time getting to know the local scene while living above the Yarra. Out On The Weekend will be nearly a year since our last headline show in Melbourne, and it’s a huge honour returning to headline a festival that puts my style of music front and centre. Can’t wait to play for everyone again.” – Marlon Williams.

Alt-Country and Americana genres are supported heavily by community radio across this broad land of ours and 3RRR in Melbourne is one such station. 2016 sees the 20th Anniversary of Denise Hyland’s ‘Twang’ program and to celebrate this very special milestone 3RRR & Twang will broadcast a special Grand Ole Twang Live To Air from the Out On The Weekend main stage.

“I’m so thrilled to have been invited to present a live broadcast of “Grand Ole Twang” at Out On The Weekend. Celebrating 20 years of my RRR show Twang, alongside an awesome lineup of some of the best local and international Americana music there is. Add an exceptional location, great people, top shelf food and booze, it’s a day not to be missed.” – Denise Hylands, Presenter of Twang, 3RRR.

Also appearing in 2016 will be frequent visitor Robert Ellis who recently released his self-titled album that has critics raving – NPR “Ellis’s musical daring and impeccable songcraft render it beautiful.” Robert will be joined by his stellar band of musical brothers.

Canadian songstress Lindi Ortega, described by The Guardian as “southern Americana with emotional heft,” makes a welcome return to Australia and Out On the Weekend for the first time since 2014. That year she left audiences wanting more and 2016 will be no different.

Chicago born and raised Joe Pug also makes a long over due return having not been in our part of the planet since 2012. In that time Joe wrote, recorded and released his third and critically acclaimed album Windfall in 2015. On release it was met with high praise with The Australian describing it as “absolutely brilliant.”

Joshua Hedley, who has toured Australia with Justin Townes Earle and Jonny Fritz and recently completed a co-headlining Australian tour with Willie Watson, will be back at Out On The Weekend but this time stepping out front and centre as the star of his own show with his own brand of traditional country music.

The Cactus Blossoms will be headed our way for the first time ever and will bring their harmonies and timeless style with them. Made up of brothers Page Burkum & Jack Torrey (yes they are indeed brothers), their debut album ‘You’re Dreaming’ was released in 2015 with much fanfare and praise with American Songwriter stating “It won’t take more than one spin for these songs, with their lovely, pure melodies and sharp wordplay, to get stuck in your brain.”

Also gracing the stage at Out On The Weekend in 2016 will be Cash Savage & The Last Drinks, who’s new album ‘One of Us’ recently received a 4/5 star review from The Age.

All Our Exes Live In Texas is a fantasy draft of Sydney’s finest singer-songwriters – Elana Stone, Katie Wighton, Hannah Crofts and Georgia Mooney – here combining in four-part indie-folk heaven. On mandolin, ukulele, accordion and guitar they’ve got it all.

Canadian born but Australian resident Tracy McNeil & The GoodLife will bring her style of country rock to proceedings. The new album Thieves was given 4/5 star review from Rolling Stone Magazine and called a “A masterful follow-up to the much-admired Nobody Ever Leaves.”

Melbourne based Gritty alt-country act The Stetson Family, who have been described as “champions of fresh bluegrass but with a bedraggled soul of rock and roots,” will also be along for the ride.

And, last but not least, Bakersfield Glee Club, who will strut a mix of barroom classics and honky tonk for audiences crying out for traditional country sounds and songs.

Tickets available from 9am on Friday July 29
from TicketScout

Very limited Cripple Creek Ferry Packages available for $199 (inc. all fees) including:
– Return Ferry transfer from Dockland to the event with live entertainment aboard!
– Entry to Out On The Weekend
– 2 x meal vouchers for main dishes valued between $15-$20
– 4 x beverage vouchers
– Limited edition ‘Cripple Creek Ferry Package’ screen printed poster (distributed to you on the return ferry ride after the event) Ferry departs Docklands at 11:00am and returns after the event.