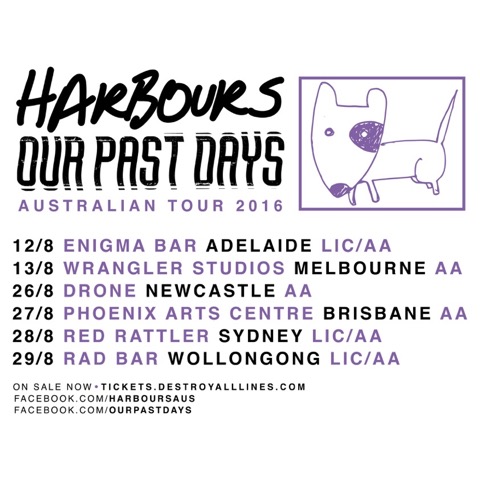 Melbourne alt-rock five piece Harbours and Sydney punks Our Past Days are hitting the road together next month for a six date tour.

Local supports have now been announced.

Kicking things off on a Friday night in Adelaide, Down With The Ship, The Away Game and Watch The World will set the marker high for the rest of the tour to follow.

Doors for Saturday’s show at Melbourne’s Wrangler Studios open at 1.00pm so get there early and catch Between You And Me, Better Half and Hindsight play into the afternoon.

A week later, things resume in Newcastle where Introvert, who will be launching their EP, and Eat Your Heart Out will have the crowd at Drone hyped for the evening ahead. Doors open at 6.00pm for this one.
Brisbane’s Phoenix Arts will open doors at 5pm for the five band feast they are laying on.
Starting with Vitals, Satellites and The Comfort and ending with OPD & Harbours.

Be at the Red Rattler in Sydney by 4pm on the last Sunday in August and be sure to catch Blue Velvet and Hindsight, who are joining the tour once again, plus Rumours.

Finally, the tour will wrap up in Wollongong where the Rad Bar will host a mad Monday evening that begins with Amends and Mix Tape For The Drive.

From hardcore and punk beginnings Harbours have progressed into a darker, more emotive and brooding force; channeling grunge, post-rock and emo into a mature and focused entity.
Harbours are primed to deliver an on point set of modern post rock to their fans on this co-headline tour.

Sydney punks Our Past Days have toured tirelessly all over the country, snagging some pretty impressive supports along the way.
Their work ethic has impressed many and their super tight live show that’s unpredictably chaotic and driven by hard-hitting vocals and emotional grit has impressed even more!

Saturday, August 13: Wrangler Studios, Melbourne – AA w/ Between You And Me, Better Half & Hindsight
Tickets from: http://bit.ly/HAROPD16mel

Watch Harbours video for Take Me Under