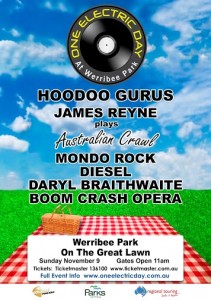 The second annual ONE ELECTRIC DAY has announced another massive line-up to rock the great lawn of Werribee Park this November. With the likes of Hoodoo Gurus, James Reyne playing Australian Crawl, Mondo Rock, Diesel, Daryl Braithwaite and Boom Crash Opera, this is set to be the ultimate day of Aussie Rock. Last year’s inaugural event sold out well in advance and it’s anticipated that the 2014 festival of rock will be no different.

Event organiser Duane McDonald says he has already had many enquiries about the ONE ELECTRIC DAY show prior to announcing this year’s event, all based around the popularity of the 2013 show. “Last year’s show sold out a couple of months in advance,” he says. “It was a fantastic family event and we had great reviews from patrons and media alike. We have a commitment to continue to give music fans outside of the city a chance to see the calibre of concerts and festivals that patrons attending shows in metro centres have. ONE ELECTRIC DAY is an event that we will continue to grow every year and we’re excited about the fantastic line-up of legendary Australian artists on this year’s bill. I am excited to bring this event to Werribee for a second year, it is a fantastic venue with the magnificent backdrop of the iconic Werribee Mansion.”

From what started as a show in an inner city lounge room in 1981, the iconic Hoodoo Gurus smashed onto the Aussie music scene and won the hearts of the rockin’ public. With a swag of singles such as Waking Up Tired, Miss Freelove 69, Bittersweet, The Right Time and the chart topping What’s My Scene, this band is ingrained in Australian music history. Featuring revered musicians, Hoodoo Gurus debut album was named the Australian Debut Album of the Year and when it was released in the US, it sat at #1 on the Alternative/College charts for seven weeks. The band have too many great tracks to mention, as audiences will find out when they take to the stage at ONE ELECTRIC DAY and have deservedly been elected into the ARIA Hall of Fame. While over the years they’ve taken small hiatuses, the band always find their way back onto the musical stage together. They’ve got almost a dozen albums under their belt and there is no doubt, even more to follow, there is no other way to really say, the Hoodoo Gurus rock!

Mondo Rock are one of the most iconic bands to rock Australia and it’s no surprise that all their hits are still a staple on Australian radio. Between 1977 and 1991 they had almost too many hits to count, from Come Said The Boy, State of the Heart and Cool World to name a few. It was big news to the local music industry to hear of a reformation of the band – they haven’t been on the road for more than 20 years and their recent touring celebrates the legendary Chemistry album. With Ross Wilson at the helm, Mondo Rock are certainly an exciting addition to the bill for ONE ELECTRIC DAY. Ross himself has been twice inducted into the ARIA Hall of Fame and is known as one of Australia’s most enduring and beloved performers.

Known both as his revered stage name Diesel and his birth name Mark Lizotte, whatever title he performs under Diesel always puts on an incredible show. He first burst onto the music scene as Johnny Diesel and The Injectors and instantly turned heads. When he went solo, he earned even more fans, both across the blues and rock scene and with hits like Tip of My Tongue, Cry in Shame, Come to Me and Never Miss Your Water, plus many more. Now he is harking back to his roots and taking audiences on a journey of those hits in his current Australian tour. It’s been a quarter of a century of music making for this incredible musician and he is traversing through his musical career from 1989 to 2014 and winning over audiences with his enigmatic stage presence. Diesel’s inclusion on the ONE ELECTRIC DAY bill is exciting and fans will love the trip down memory lane and through to the future.

When it comes to recognisable voices in the Australian music scene, there are few as impressive as that of Daryl Braithwaite. In a diverse career that has spanned decades, Daryl’s consistency as a performer has never wavered, something that sees him performing regularly to packed crowds around the country. Starting his career in the 1970s as the frontman for Sherbet, Daryl was crowned King of Pop and the band produced 20 national Top 40 singles. Songs like Howzat and Summer Love became ingrained in the national psyche. In the 1980’s Daryl set out on his own solo career, kicking off with the smash hit album Edge featuring singles such as One Summer and As The Days Go By. His follow-up album Rise spawned the single The Horses, a song which never fails to get massive audience participation. Daryl recently released an EP of new material Forever The Tourist through his former long-time record company Sony. For anyone who loves music, it’s not surprising to know that Daryl regularly performs to packed out crowds around the country, and if you need a taste of his live shows, he also released a live DVD a couple of years ago (his first).

With songs like Onion Skin, Hands Up In the Air, Bettadaze and The Best Thing to name a few, Boom Crash Opera embody the spirit of 80s and 90s Australian rock. With Melbourne-based Dale Ryder on vocals, there are few Aussie music fans who wouldn’t be familiar with the band’s impressive back catalogue. Boom Crash Opera smashed onto the music scene with their debut single Great Wall in the mid-80s and never looked back. Described as one of the country’s most underestimated pop phenomenons, it is in their live shows that Boom Crash Opera really shine. A Boom Crash Opera show ensures audiences are on their feet from the start to the finish, an enviable quality for a band.

Last year’s inaugural ONE ELECTRIC DAY sold out super quick, so punters are advised to get their tickets quick or risk missing out. ONE ELECTRIC DAY will certainly be one of the highlights on the Victorian music calendar this summer.