pillars and hidden between huge rectangular prisms which display Orwellian arrangements of human movement. Pairing tracks with visual displays that are often breathtaking and always in the theme of wonder at the natural or fear of the dictatorial is used to great effect throughout the show. ‘Resistance’ is accompanied by DNA helixes spiralling and human forms twisting upon the screens of the prisms above, interspersed with close ups of the band for those sitting further away in the stadium. ‘Undisclosed Desires’ has verdant lasers flinging their light across the crowd, creating a visual spectacle reminiscent of swarms of fireflies hovering above punters’ open mouths.

Accompanying the visual antics is an attempt at the 360° show – the entertainment centre filled seats in front, on the side and behind the band. Catered for with a rotating drum kit and side balconies for Matt Bellamy to stride up and down on (when he wasn’t five metres in the air), the challenge of accommodating playing to the extra audience made the show appear less spontaneous, as did the lack of banter with the crowd – although this was somewhat mitigated by incorporating live video footage of the audience into the projections on the towering video screens.

The almost two hours Muse were on stage meant there was plenty of time for a host of songs from The Resistance as well as taking tracks from Black Holes and Revelations, including hits ‘Starlight’ and Supermassive Black Hole’. Muse also delved into earlier works including ‘Hysteria’ and ‘Time is Running Out’ from the album Absolution (2003), the latter accompanied by a haunting projection on the prism above Dom Howard’s drumkit – a man suspended in a tank filled with water, never quite reaching the ever rising surface. The ‘Feeling Good’ cover (Origin of Symmetry, 2001) also went over well with the crowd.

The night ends with ‘Knights of Cydonia’ shaking the arena as giant inflatable eyeballs are released from the roof onto the outstretched hands of the appreciative audience. Muse played plenty of hits, spent plenty of time on stage and put on a spectacular visual show that demonstrated their opulence as performers. 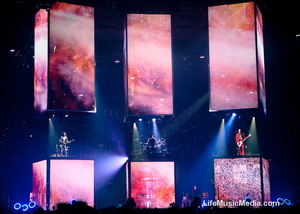