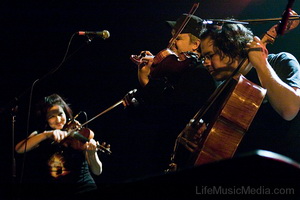 Over the course of a little more than an hour, the ensemble treats a small, enthusiastic crowd to new material that shows they still have the creativity and talent to match their genre-crossing ambitions.

No less than half a dozen cuts feature from new album Fourthcoming. And although, logically, it might seem that the slinky cabaret of Lara Goodridge’s Butter Girl would sit awkwardly against the alienating dissonance of Tim Hollo’s Stick It Where The Sun Don’t Shine, in the flesh one becomes too absorbed by the fascinating interplay of cello, dual viola and violin to be bothered with such niceties.

Covers vie for attention alongside original numbers. Sufjan Stevens’ delicate pop-classic The Predatory Wasp of The Palisades is Out To Get Us! draws approving cheers from the floor, while a reinterpretation of Seekers Who Are Lovers seems to layer even more shoegaze echo and fuzz than the Cocteau Twins could manage into the tune.

Only the Leonard Cohen masterpiece Famous Blue Raincoat fares less well. Tim Hollo, for all his striving, cannot match the gravitas of Cohen’s rich baritone. It’s a relatively rare tune where they diverge away from their normally fully instrumental mode and add vocals. You couldn’t pick a higher bar to try and leap, though.

In the home stretch, the band amp up the aggression. Older tunes Now To The Future and Reptilia (of the Strokes’ fame) are brilliant, but nothing comes near to matching the in-your-face ferocity of their rendition of Rage Against the Machine’s Killing In The Name. As the song soars, weeps and screams, it’s nigh impossible to tell who’s playing what part, but you couldn’t imagine Tom Morello and Zack de la Rocha listening with anything other than unfeigned delight. If they’d been there.